Let me begin today by filling in some of the details I missed yesterday when I ran out of gas late at night.

Here’s what I saw when I arrived at the Iron Kettle Farm yesterday. I entered with some trepidation because it was the end of a long day and I didn’t know what I would do if I got a cool reception. The first person I met was Lyla: 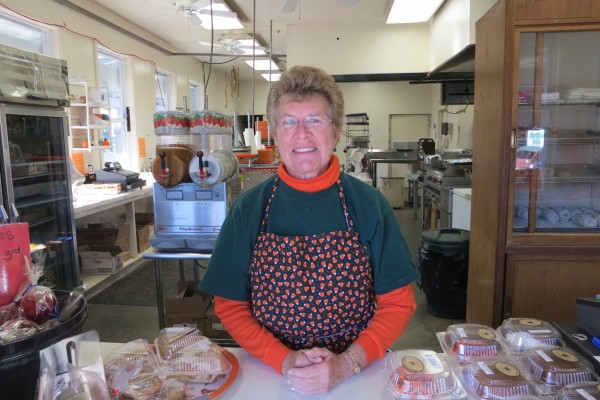 She was at the food “barn” and when she heard my self-introduction, she went and got her cousin Bonnie: 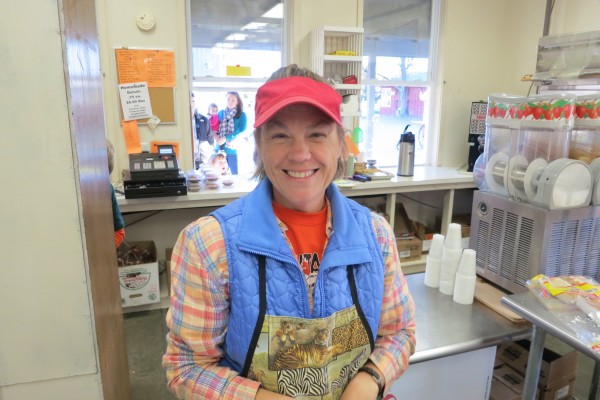 who said they had been expecting me — thanks Marien and Carl for phoning ahead. She is one of the three children of the owners of this fine establishment, Skip and Jeannie Jackson (you saw the following picture yesterday as well): 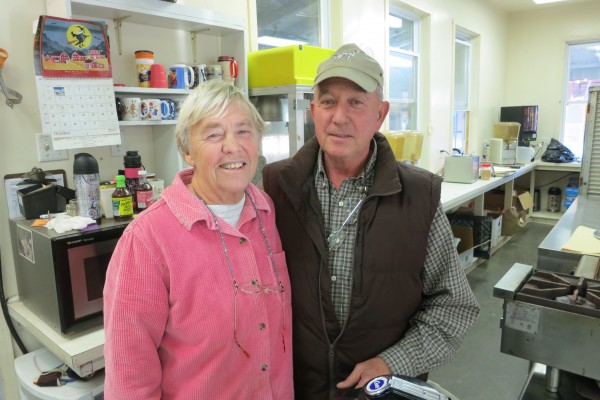 What very fine people they all are. They welcomed me warmly, brought me into the “back” and fed me up with hot chile and cheese, corn chips, hot dogs, hot cider. Skip and Jeannie had no problem with me pitching my tent there and together we found an excellent, sheltered spot, with electricity.

Apparently the Iron Kettle Farm is legendary in the area — everyone knows about it. It has been running since 1969 and grows each year. I can’t capture the scale of the place. There were animals (more about that later), hayrides, food concessions, and an extensive pumpkinization (my word) of common children’s themes. Here are a few examples of the dozens of instances of the latter: 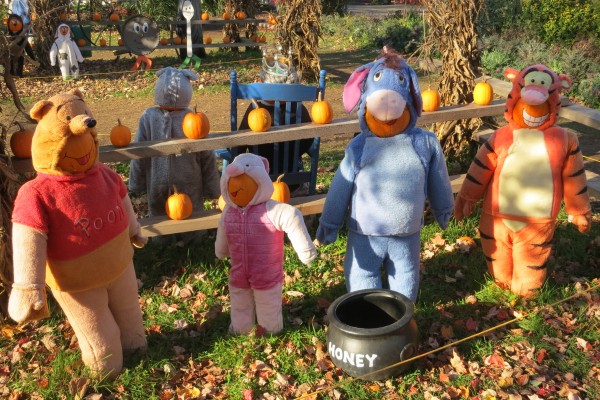 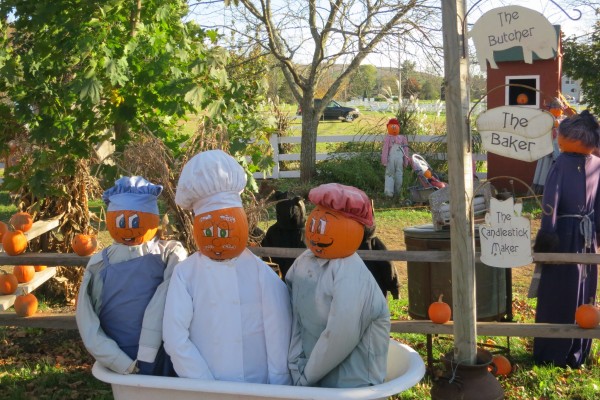 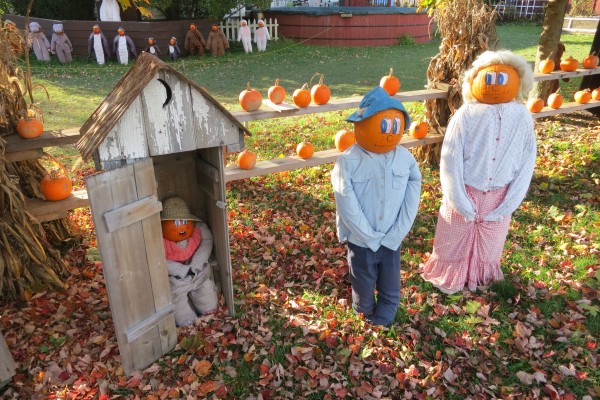 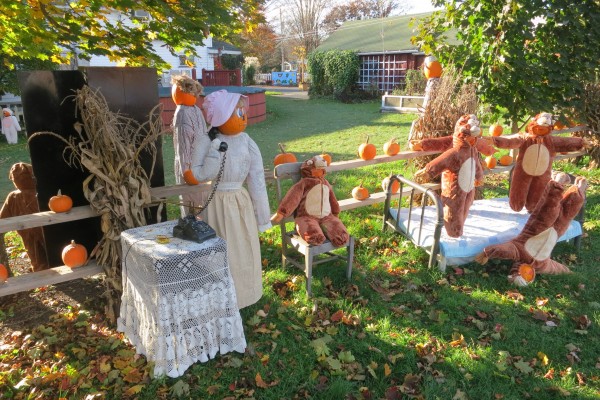 The pumpkin theme was everywhere:

All of the pumpkins are grown locally on the farm. It is a very popular autumn destination and they do most of their business in October and the last half of September. I think it is great fun for kids and I wished the grandchildren I’m heading to visit in Toronto could have been there with me — we will make it happen someday!

It was dark by the time I was set up, with one side of my tent fly pegged to a bale of hay and the other to a wheel of the stoller. Can you see the electrical cord sneaking into the tent? 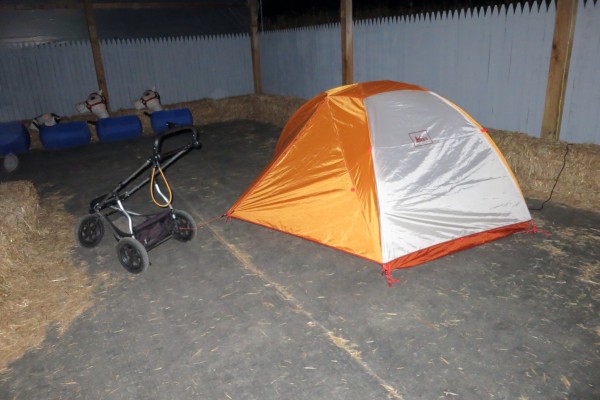 Right next to this spot was the place they kept the goats, calves, ducks and roosters. Here are a couple of pictures I took this morning: 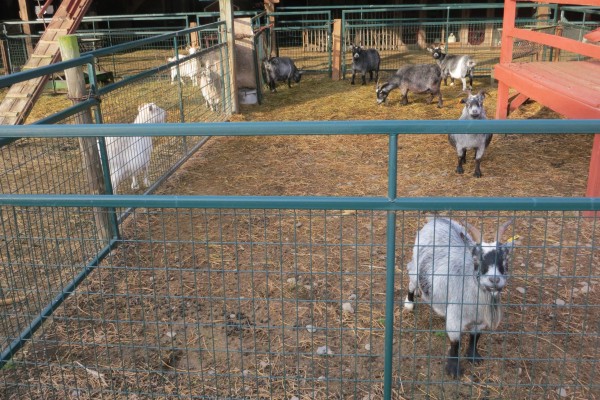 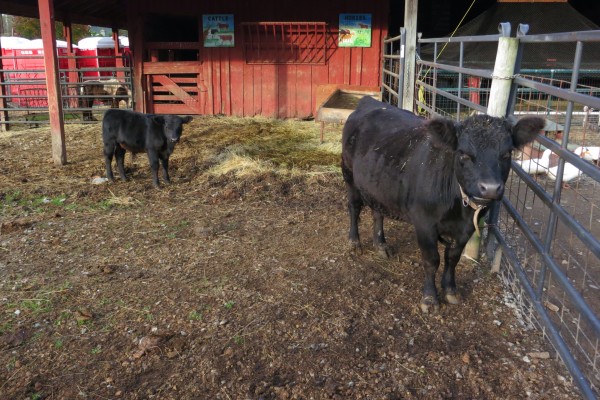 These animals were all talking as the sun set and I wondered what the night would be like, but they eventually all settled down, like me; earplugs helped too!

As I mentioned yesterday, I did my best to respond to comments and then blog about the day, but the temperature was dropping so I had to give up. Once I was tucked tightly into my three-season sleeping bag, however, I was warm as toast and slept through most of the night.

Earplugs did not block out the roosters early in the morning so I leaped out of bed (well, extracted myself from my sleeping bag), repacked everything and headed over to the food barn by 6 AM where Skip had already been for an hour and a half getting ready for another busy day. One of the things he had to do was make a LOT of doughnuts with this machine: 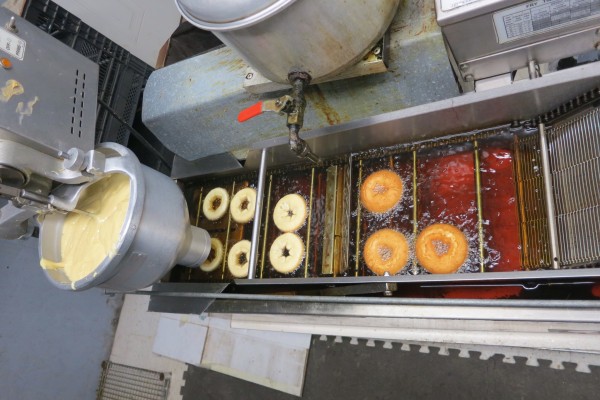 so I freed him up to do other things by volunteering to “catch” the doughnuts as they came off the assembly line: 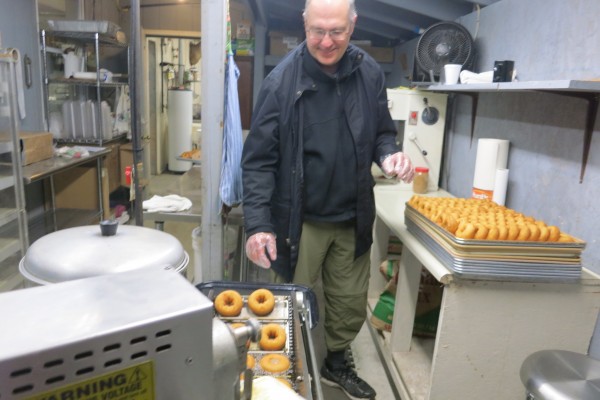 I figure I “caught” about 250 of those puppies.

When “we” had made enough for the first onslaught of people later, Skip said he would take me over to the Squirrel Club for a coffee — there was still time before opening. This exclusive little club consists of a bunch of guys in the area who get together at a farmhouse for coffee every day of the year except for the first day of the deer hunting season. Not all of them are there every time, but here is who was there today: 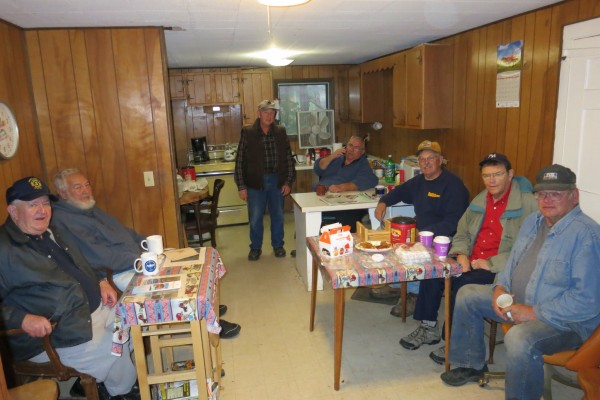 So going from left to right we have Roy, Bill, Skip, Jim, Andy, Ron and Ben. The meetings are always held at Andy’s place. The sugar-coated doughnuts are Skip’s offering (needless to say). They discuss anything and everything and only men are allowed. Oh, and it’s called the Squirrel Club because they are all self-proclaimed nuts. Skip and I only stayed for 20 minutes or so, but it was one of the best 20 minutes so far in my entire trip.

Skip and I spread out my Finger Lakes map when we got back to the manse and looked over my planned route through Ithaca. We decided that it would be better not to travel north between Seneca and Cayuga lakes as it’s pretty empty of places to stay there. We thought it would be better to head for Watkins Glen, rather than Ithaca and then go up the west side of Lake Seneca. I’m sad not to see Ithaca, but it’s for the best.

Soon I was ready to leave and Skip presented me with a bag of sweets — homemade doughnuts, homemade chocolate chip cookies and a homemade pumpkin pie whoopie. Please don’t tell my wife! I was so grateful to them for all their kindnesses to me and Jeannie insisted that I “pay with hugs”. Just sweet!

So I left that great place, promising to come back with my wife soon: 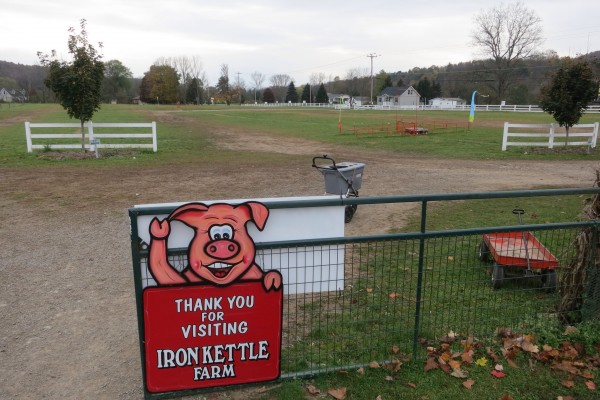 It was nippy out so I put a toque on under my Tilley hat: 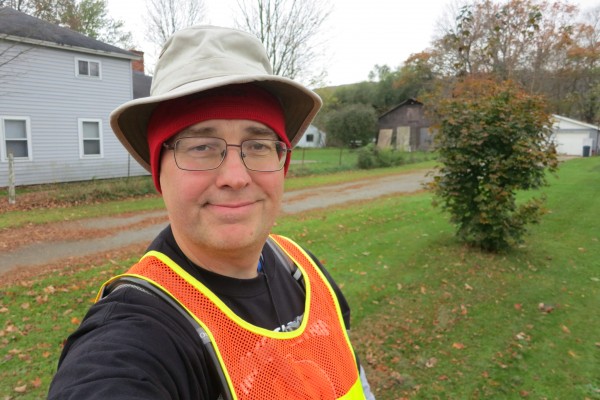 There was still an occasional maple (Canada, here I come!) that hadn’t changed color: 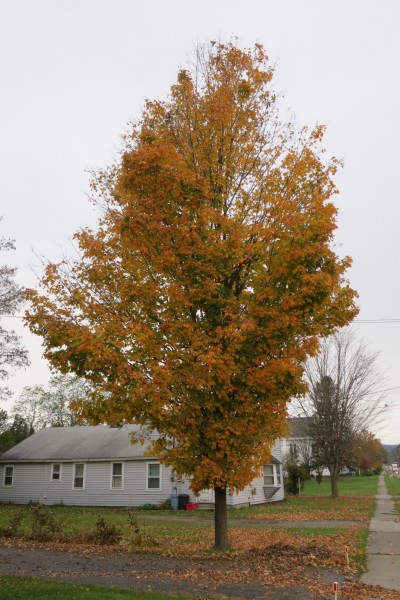 I ran across James, who makes these nice boxes and sells them beside the road — no advertising, just taking advantage of the traffic heading to the Iron Kettle Farm: 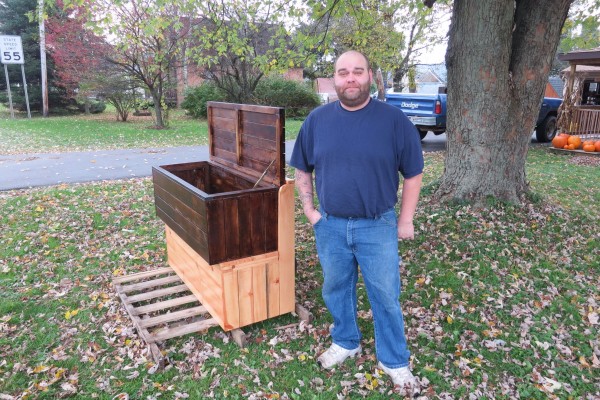 I’m sure everyone has seen those little vehicles with right-handed steering used by mail carriers. This mail carrier uses his own car but just sits in the passenger seat. I couldn’t believe what I was seeing when he pulled up, so I had him pose to show me how it is done. Unbelievable: 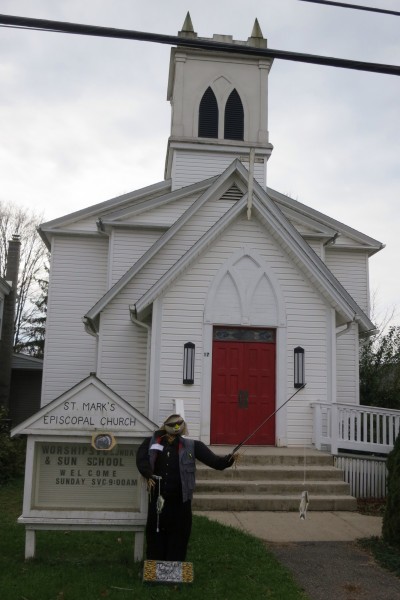 Seen in a little gazebo, the conductor has lost her head! 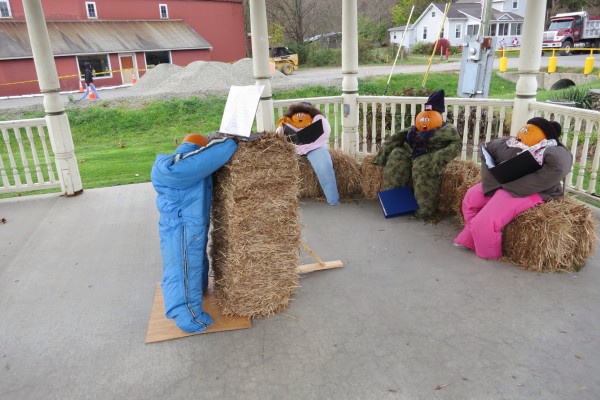 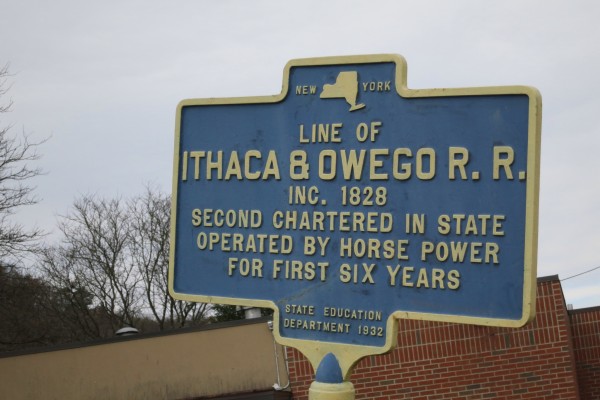 I’ve seen plenty of kitschy, horrible, overdone (sometimes extremely so) halloween displays, but I thought this one was effective because it was understated:

Rivers-of-the-day pics (pretty even when the skies are grey): 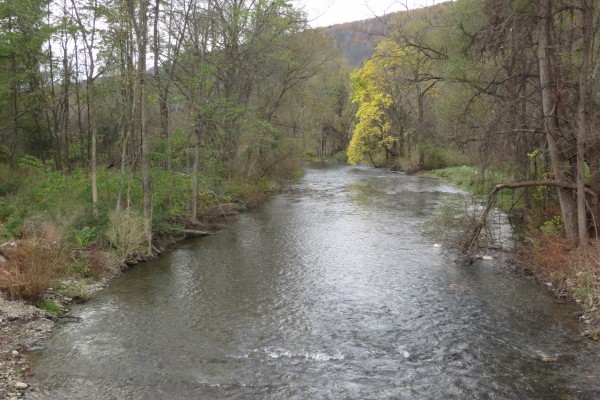 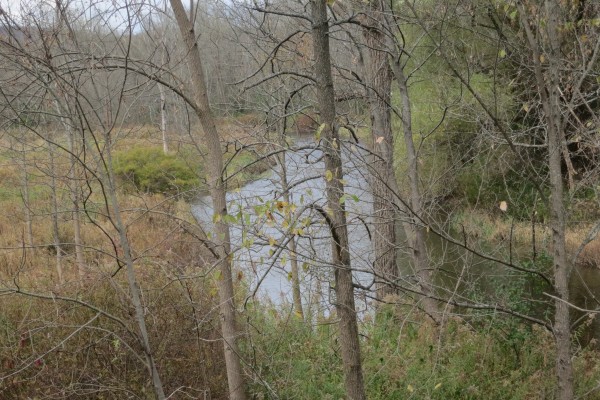 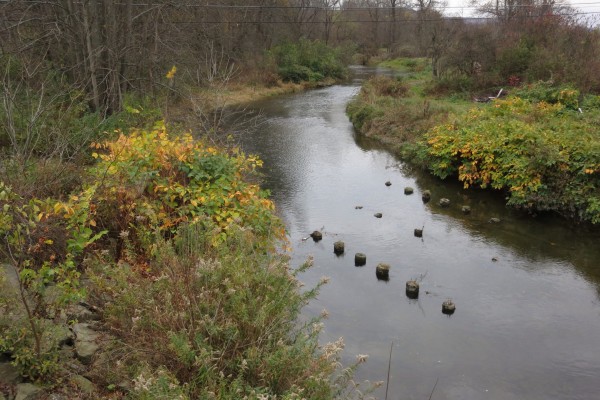 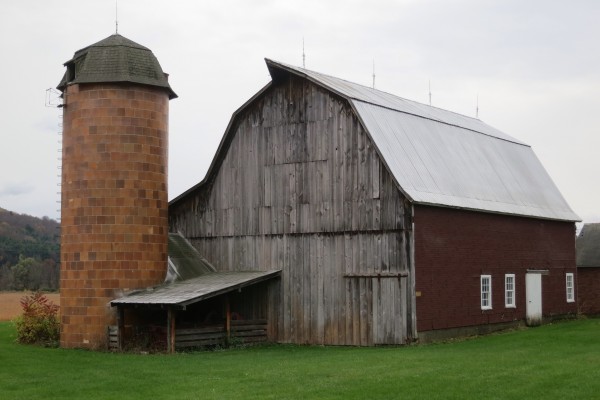 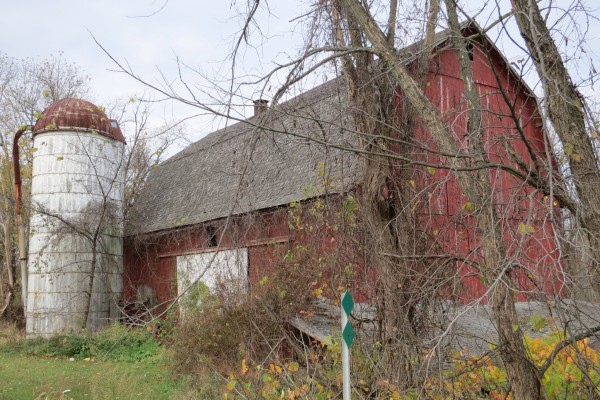 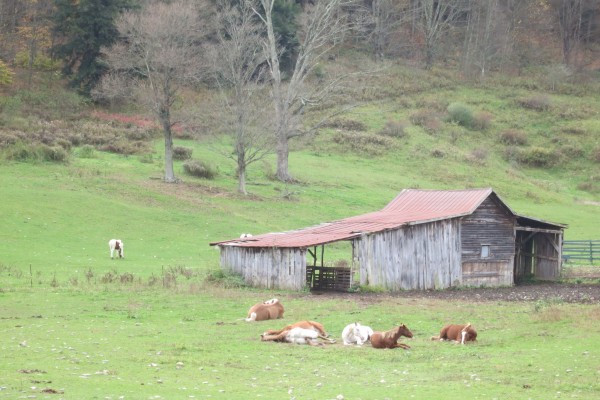 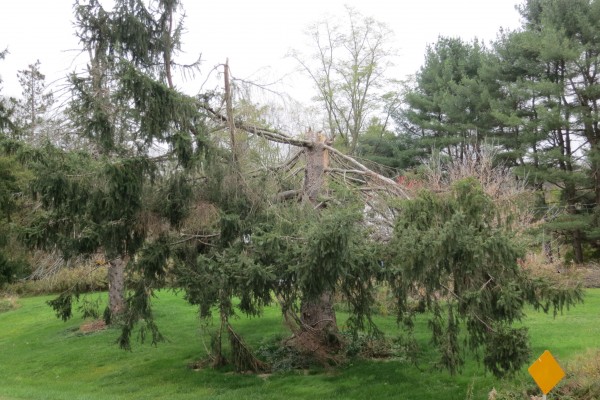 By the time I got to Spencer I had to make a decision. Somewhere between where I was and Watkin’s Glen I have at least one night where I will have to knock on doors, asking for permission to camp out in a yard. There was a bed-and-breakfast just a mile off the road, so should I stop or press on? It was threatening to rain and I didn’t relish setting up in the rain so I opted for the b&b — good decision, as the evening is nasty and wet now.

I’m the only customer right now — sweet! Pauline, the general manager, was here to welcome me: 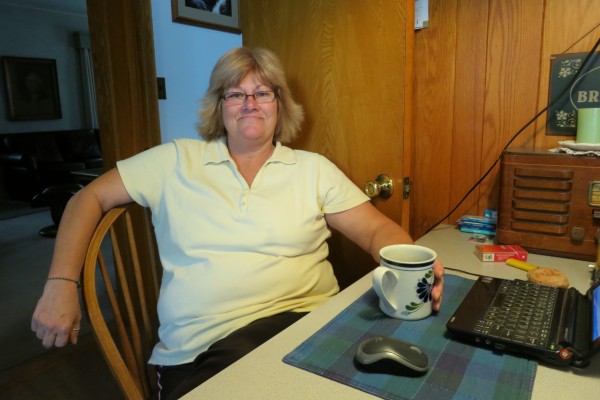 and the owners, Stirling and Bea came home later: 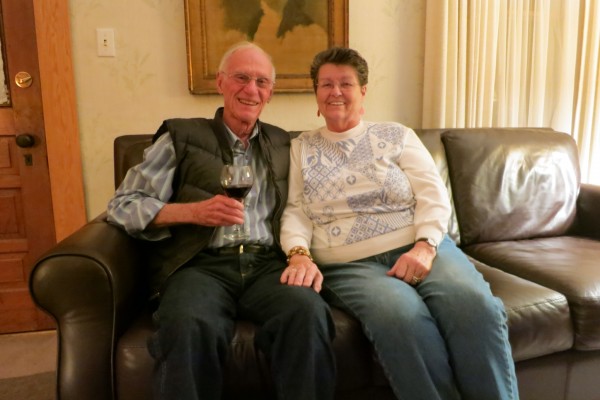 Stirling understands what I am doing very well as he rode his bike right across the USA when he was younger (as well as other impressive long-distance trips). We had a most enjoyable discussion about the subject.

I’m clean, dry and warm tonight. Thank you gentle readers for bearing with me in this longish post.