Taking this day off from walking has been a terrific decision. I walked up to Sickler’s Bike and Sport Shop when it opened at 10 and was well taken care of by Mark: 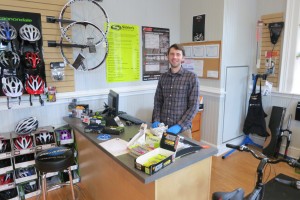 I did indeed have a very small hole in my front inner tube. The new tube I had replaced it with yesterday was in fact just fine. I think in retrospect that my air pump was malfunctioning. I remember acquiring it when I was a teenager when I got my first 10-speed and it’s been through a lot since then. I bought a new pump and threw the old one out. I also bought another spare tire from Mark, so after repairing the holey one later, I now have two spares. 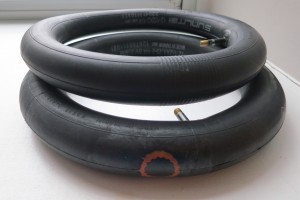 Mark had almost as much difficulty as I did yesterday putting the tire back on the rim — really hard for those small tires. He also lubed the axles and bearings, and didn’t charge for any of the labor — thanks, Mark! Now my cart is ready to go again and is in even better shape than when I began a week ago!

The cycle shop is on the first floor of this building: 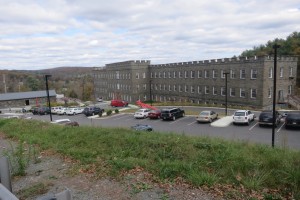 which used to be the old Bellemonte Silk Mill.

The Ledges Hotel where I’m staying is just below the left hand end of this building — there is a sharp drop there. Here are a couple of views from the hotel’s wrap-around balcony: 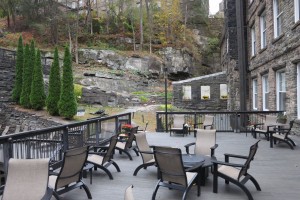 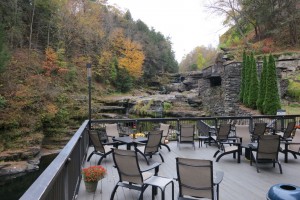 After my good cycle shop experience I headed down to Church Street to the laundramat and threw in a load of smelly clothes. I wandered off to grab a little lunch in town and this nice lady had all my clothes dried and folded by the time I got back! 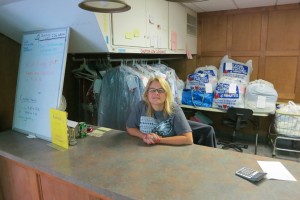 The great hotel staff allowed me to dry out my tent (I guess backpackers must go through this all the time — having to pack up their tent while it is still wet with dew): 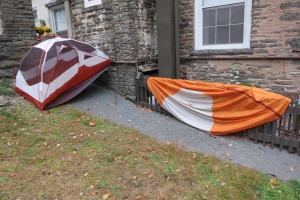 So I’m good to go for tomorrow, and probably even better prepared than when I began a week ago. I’m excited to get back on the trail and I will be undaunted by them thar Pocono hills.

A couple of general comments about blogging. One thing that I didn’t expect on this journey is how lonely walking is. In spite of the fact that I’m meeting many wonderful people, I spend a lot of time by myself. Those of you who know me know that I’m not very talkative, so it’s a measure of my loneliness that whenever I talk to someone I’m quite uncharacteristically chatty!

For this reason, I have to say that I REALLY appreciate reading everyone’s comments on this little blog. I don’t respond to all of them, but I so enjoy each one. A number of people have spoken of taking this trip with me vicariously; I can say that the inverse is true — that when people respond to the blog I feel they are here with me. So thank you for all your replies.

On a technical note, because of the big, nasty spamish world around us, I set up the blog so that I have to approve every comment before it actually appears. That way you don’t have to see some of the ridiculous, robot-generated responses on my blog. But one consequence of this is that there is often a delay between when you submit a response and when I approve it and therefore when it appears. I apologize for this, but it’s as it must be.

On another note, David, the president of the hunting club who graciously allowed me to camp on his property two nights ago, informed me that the howling I heard was coyotes.

I have one more thing for this blog post — I would like to show some pictures of my cart. Probably most of you won’t be interested, but my son Peter said his middle school class was asking about it, so I took some pictures this afternoon after I had finished all my other chores.

So here is the basic frame of this New Zealand Mountain Buggy, Urban model: 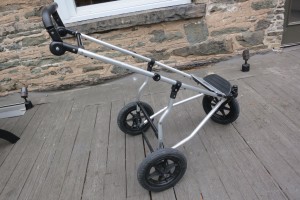 Not shown here are two canvas pieces, one for the baby to sit in and one to hold the baby’s “stuff” underneath. It also has some other bits and pieces near the handle, which were all discarded. 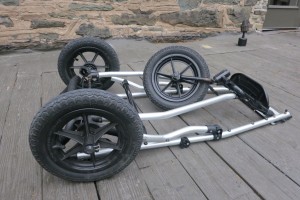 and if that isn’t enough collapsing, the wheels just pop off: 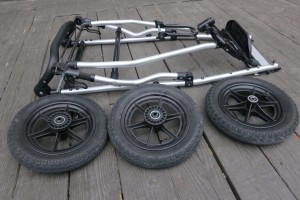 This makes it very convenient to throw in the back of a car if I get a lift at some point. Now I actually do use the lower canvas: 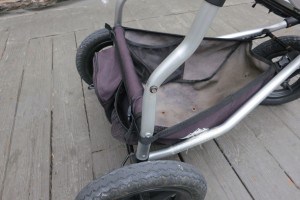 I add a flashing LED light that points forward: 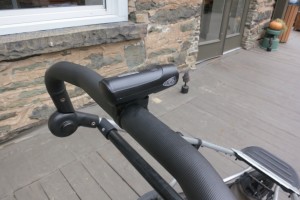 and I just set a large plastic bin into the frame — it fits perfectly! I could probably just leave it like that but I secure with a single bungie cord: 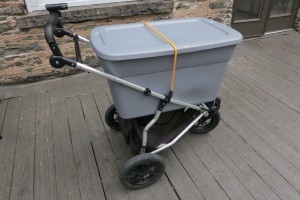 On sunny days I can lay a little portable solar panel on the lid and attach my iPhone: 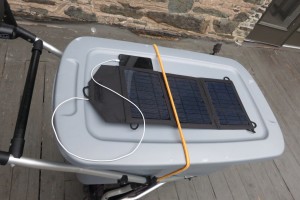 This works really well and is important because I use the iPhone for GPS tracking of my route, for google maps to make sure I’m on track, and for keeping in touch with family and friends (especially if there were to be an emergency). With no power boost the iPhone is getting lowish by the end of my 15 miles, but on a sunny day it can be at 100% when I arrive at my destination. I have a backup battery in case I need power on a cloudy day. I have only used it once so far, the night I stayed at the hunting club.

That’s it for today!