As promised, here is a picture of Dean and Barb: 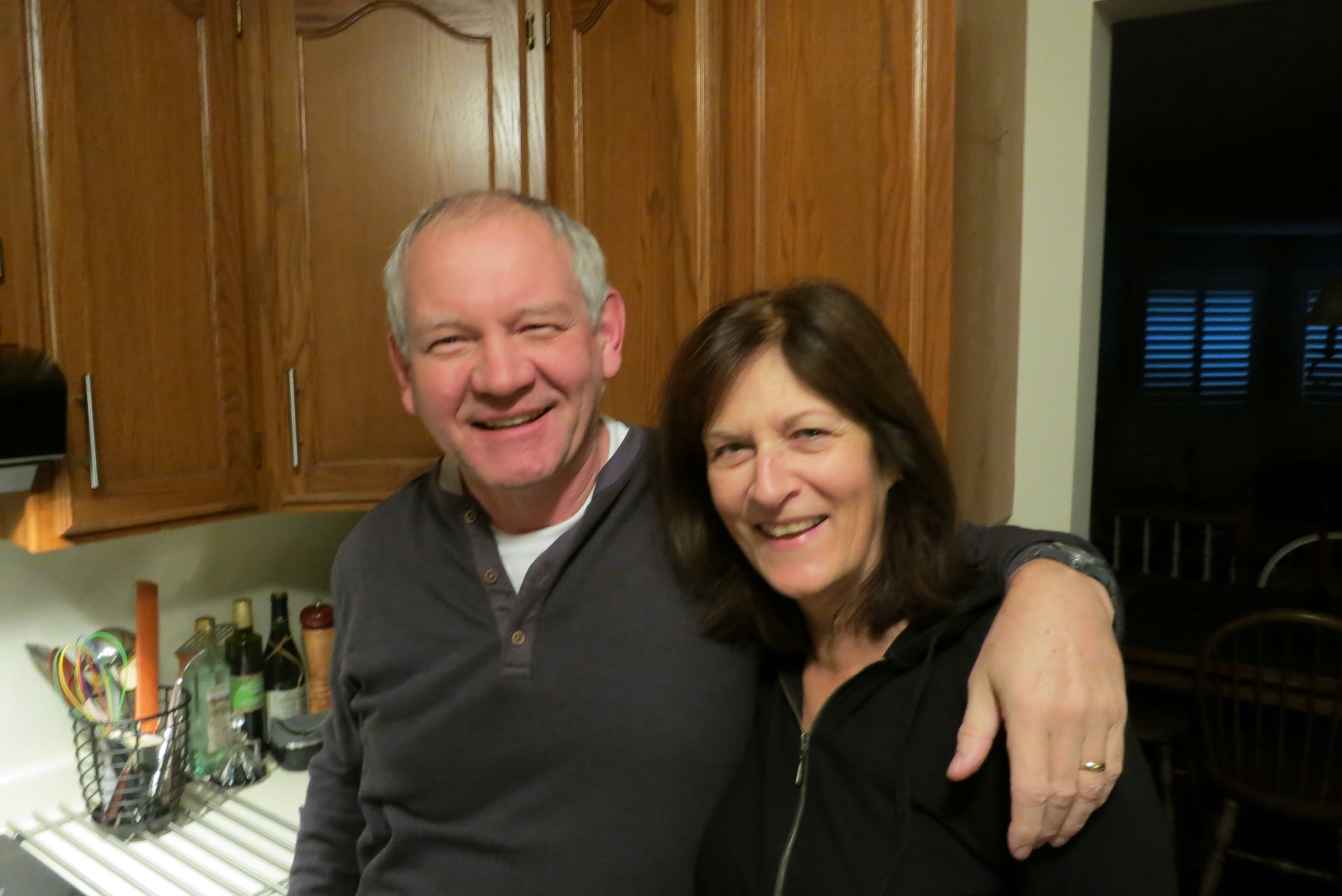 I’m sure the superlatives I have used in describing the people I’m meeting are wearing thin from overuse. But I continue to be amazed at the good these people are doing in the world. One thing that Dean and Barb have been involved with extensively in recent years is a small group that finds foster care for children, working in conjunction with the government. This involves a great deal of ongoing interaction with the children and the foster parents. It takes much love to do work like this.

Today I had another traveling companion. Here is the hand-off picture in Dean and Barb’s driveway: 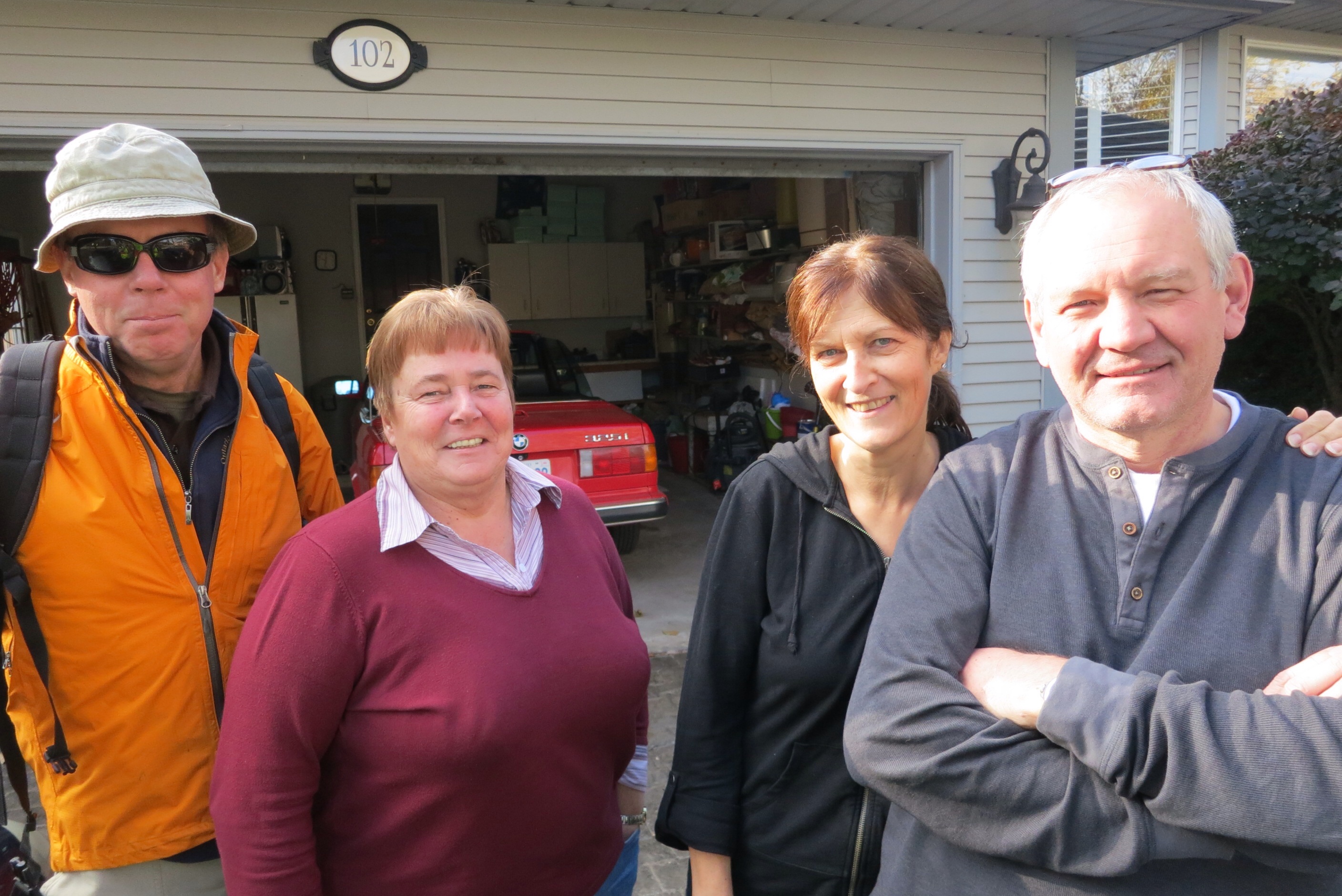 From the right: Dean, Barb, Wilma and Ed. Wilma and Ed are Dutch; the connection to me is that their daughter Kim roomed with Starr, the wife of my son Matthew, to whose house I’m heading. Wilma dropped off Ed and took my bin and stroller in her car, leaving me with just my backpack and a few small items for the day. Sometime ago Ed had suggested walking with me for a day, so we made good on this plan today. We had a good time getting to know each other throughout the day.

One of the several careers that Ed has had, his latest, is his heavy involvement in the Ontario Christian Gleaners, a non-profit company that collects vegetables that are about to be discarded by farms or large grocery chains, but which are still perfectly edible. They then chop them up, dehydrate them, and package them for organizations that give out food to the needy. This is a free service and the operation is supported entirely by donations.

Ed was a fine companion as he is very fit, having hiked the entire Bruce Traile, cycled across the entire USA, and cycled a large part of Japan. He is soon leaving for another major cycling trip in Argentina and Chile.

We got going today by making our way out to Highway 81 (or 8 as it used to be called) and heading west, parallel to the lake edge but still some distance from it. Always on our left were views of the Niagara Escarpment: 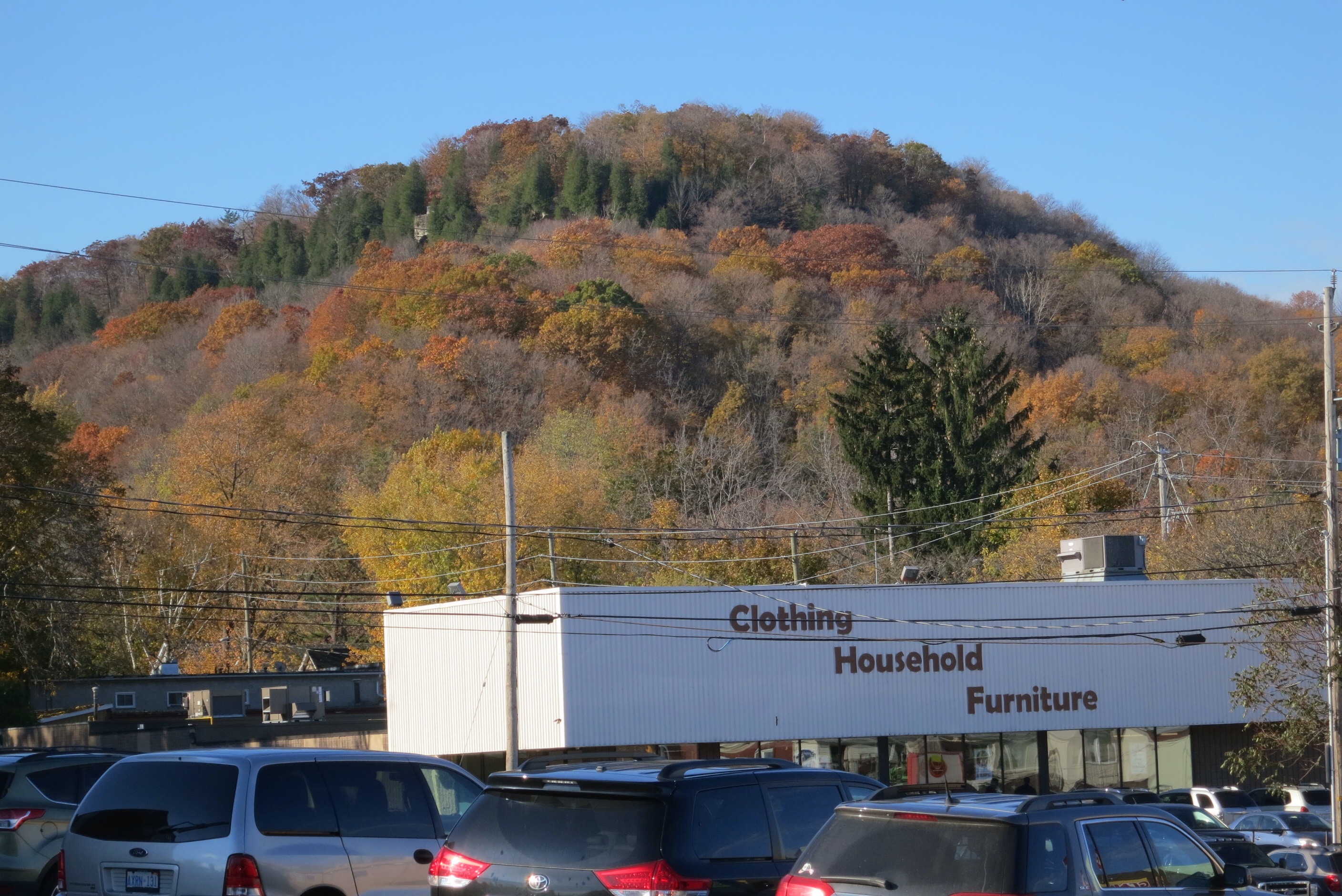 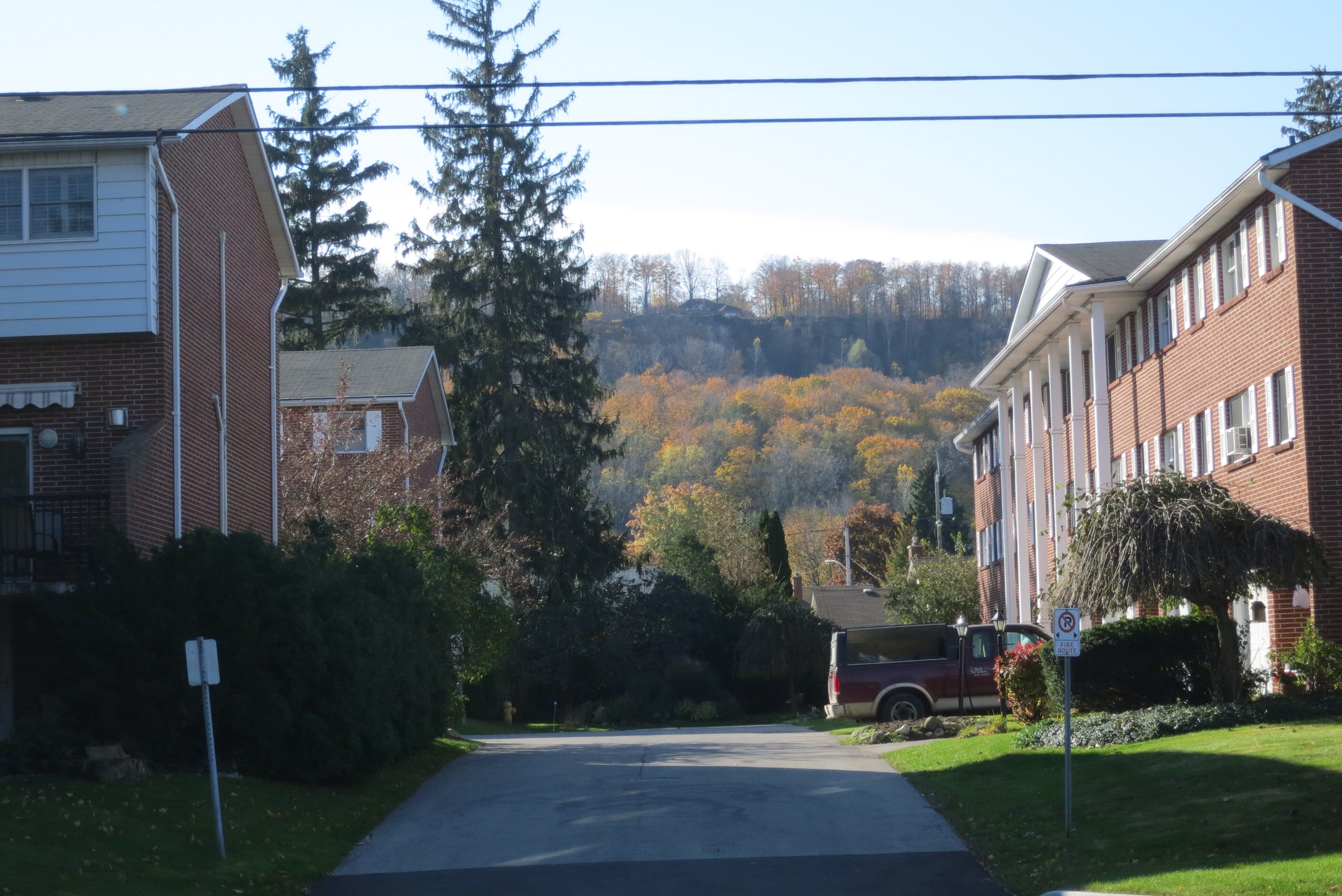 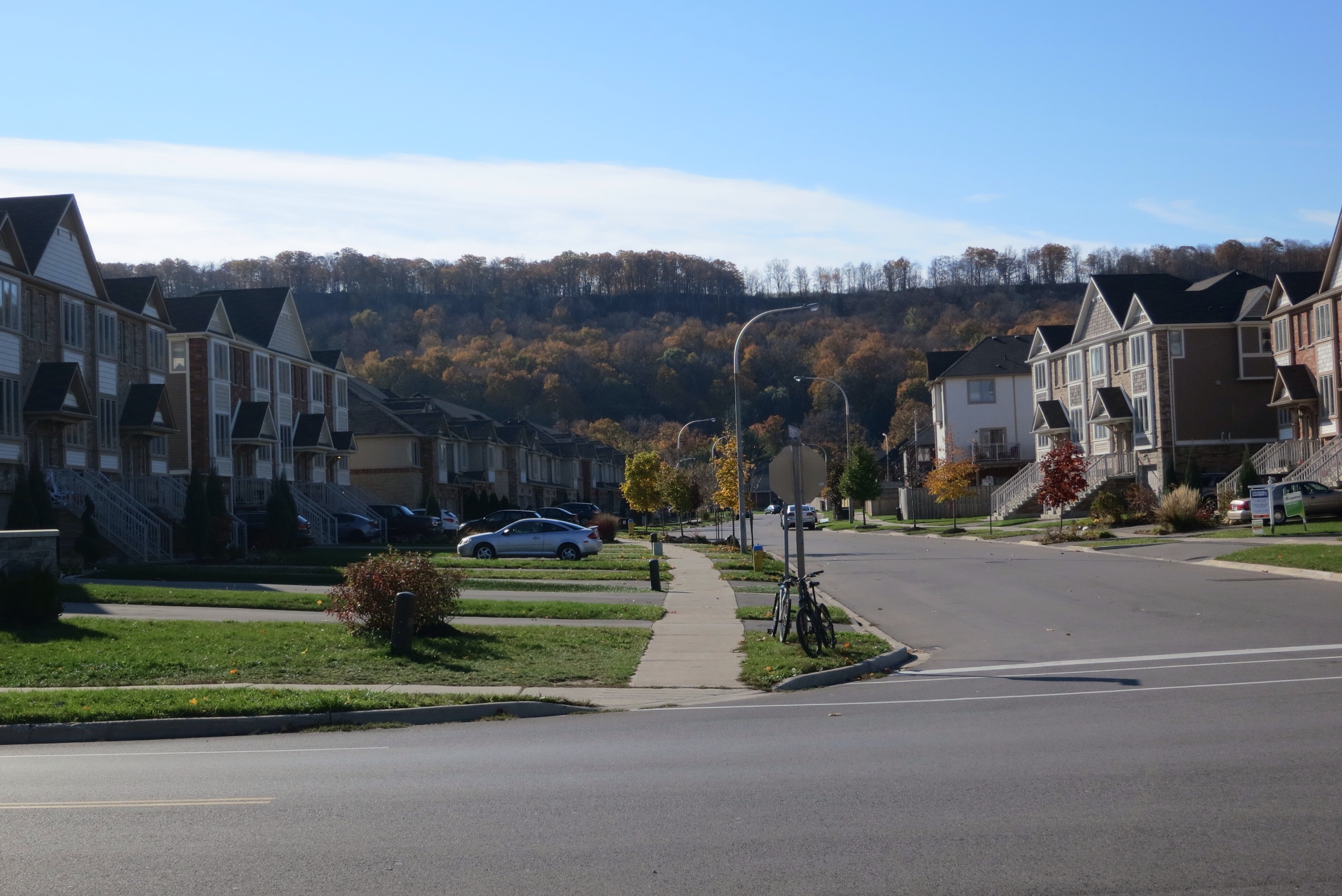 and on our right was the lake, with the QEW between us and the lake.
I continue to be surprised how much color there still is in this region:

Here’s a view along the sidewalk we were traversing: 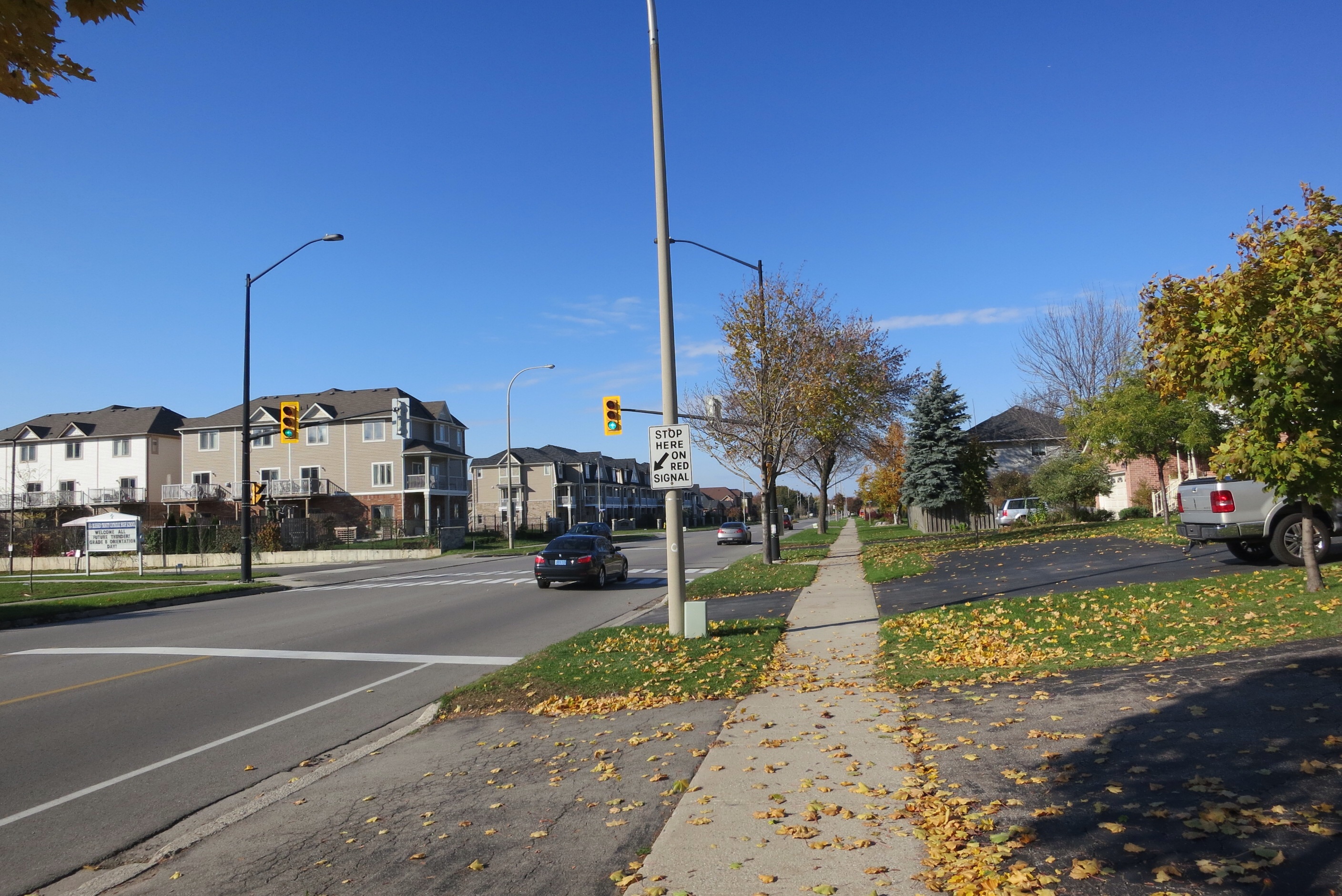 Eventually we turned north to cross to cross the QEW:

You can make out a little piece of the QEW in the center of the picture and a little view of the lake to the right. Here’s the QEW as we passed overhead; I’ve driven this road many, many times: 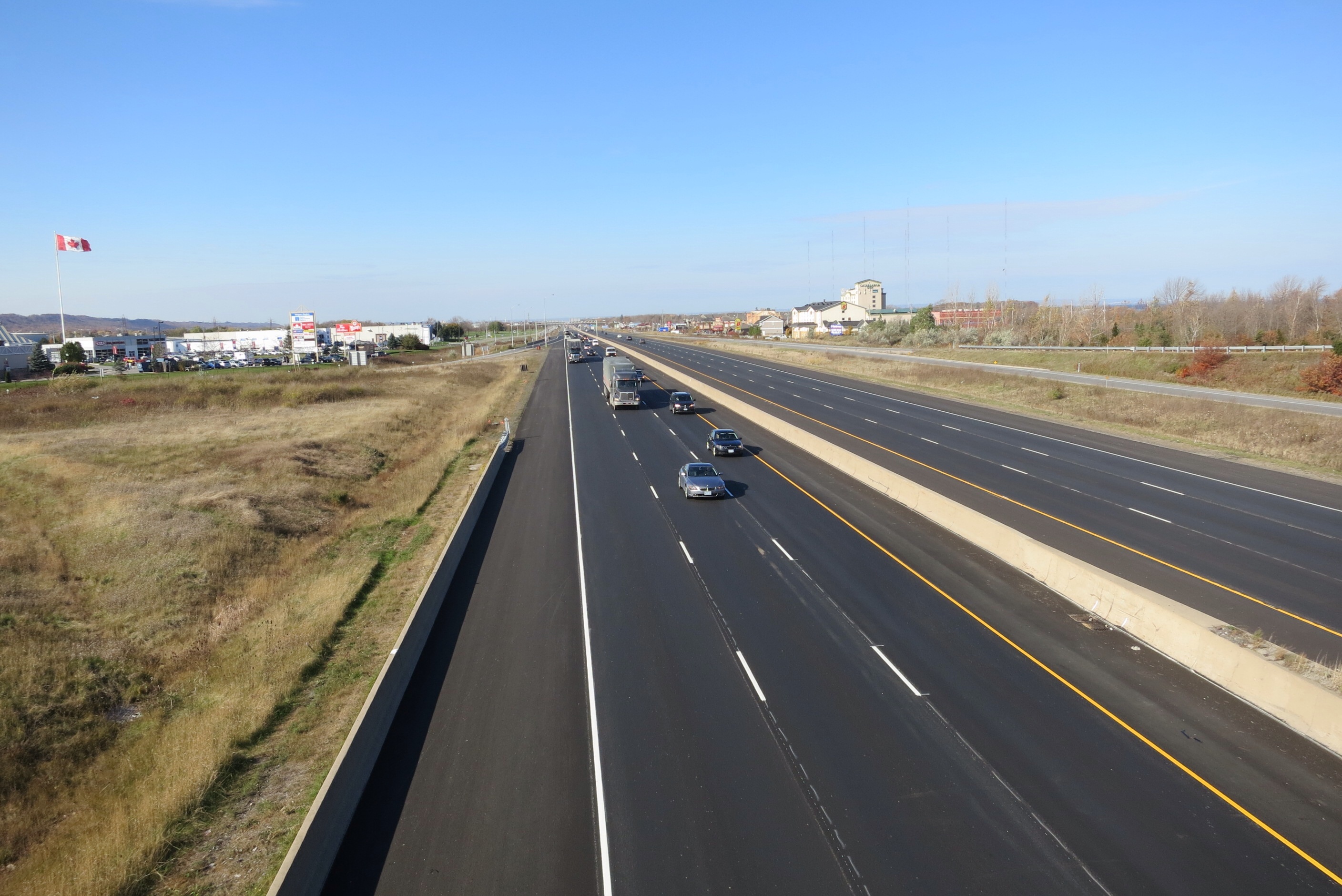 The strip between the QEW and the lake is fairly narrow, but wide enough to support housing and at one point, this cluster of eight significant antennas:

The housing is mostly town houses; here are some finished ones and some under construction: 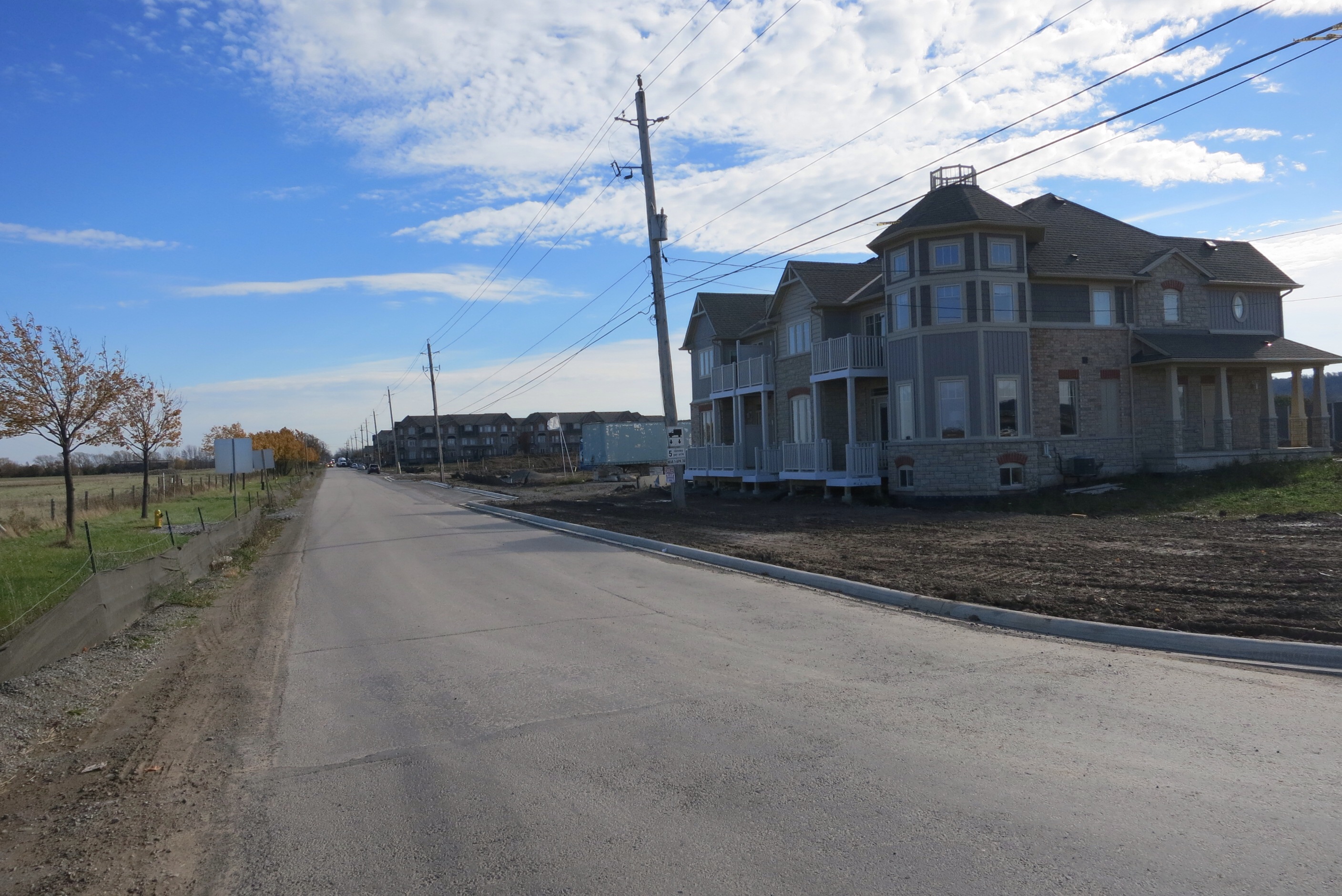 At one point we passed actual construction of concrete foundations, using a conveyor belt system that I hadn’t seen before, being fed by two trucks simultaneously: 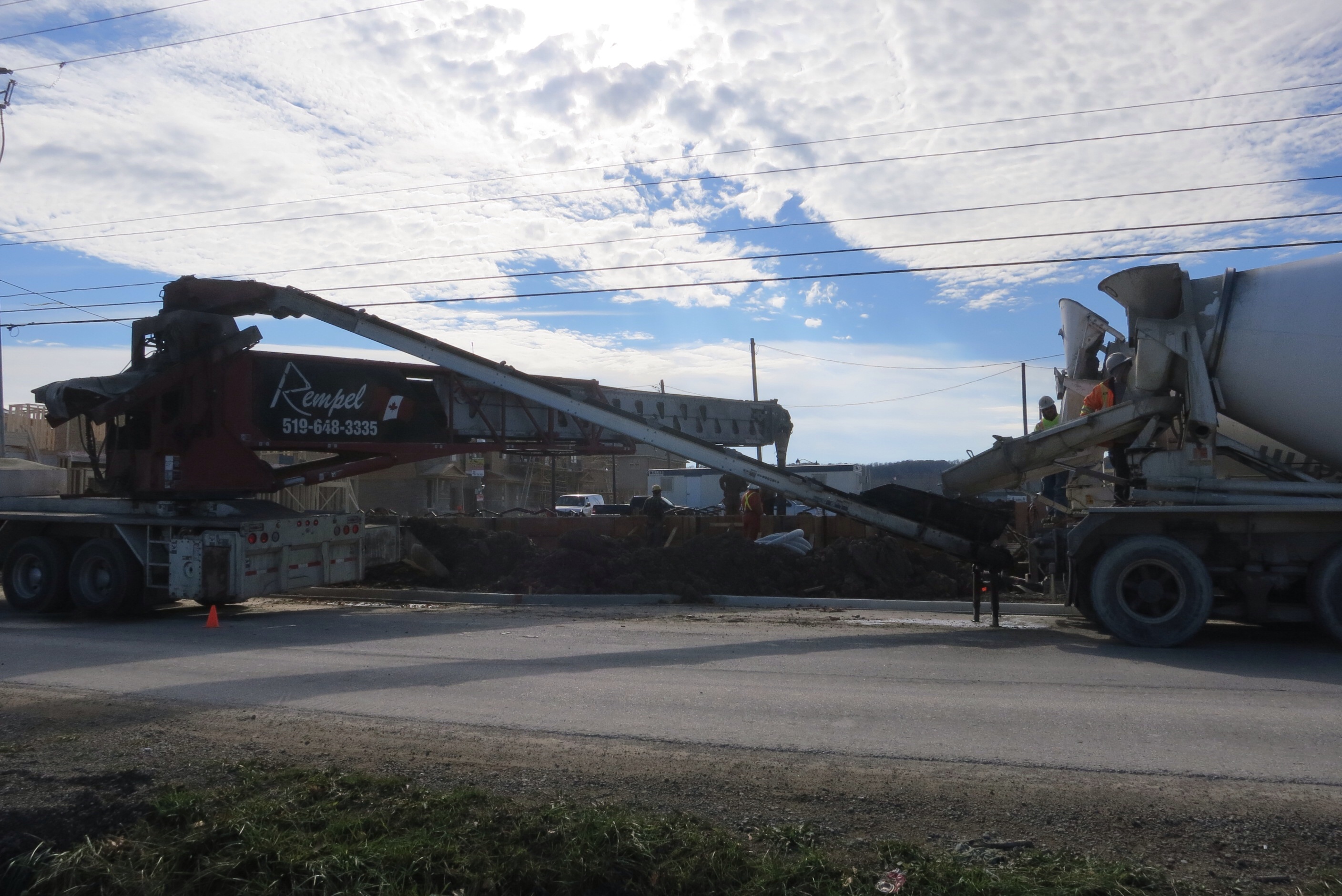 What we were looking for was the Waterfront Trail, so we were encouraged to see:

Unfortunately, there were times that the QEW came so close to the lake that the only walking option was a road that parallels the QEW for much of its length, the North Service Road. This was very noisy, though this section was a little better:

but not this section:

Occasionally we got tantalizing peeks of the lake to our right:

Ed was a great guide as he knew this area pretty well. This little section used to be wetlands; the developers managed to get permission to build here by letting the lake in a bit and making a place where homeowners could dock; this made the houses considerably more expensive! 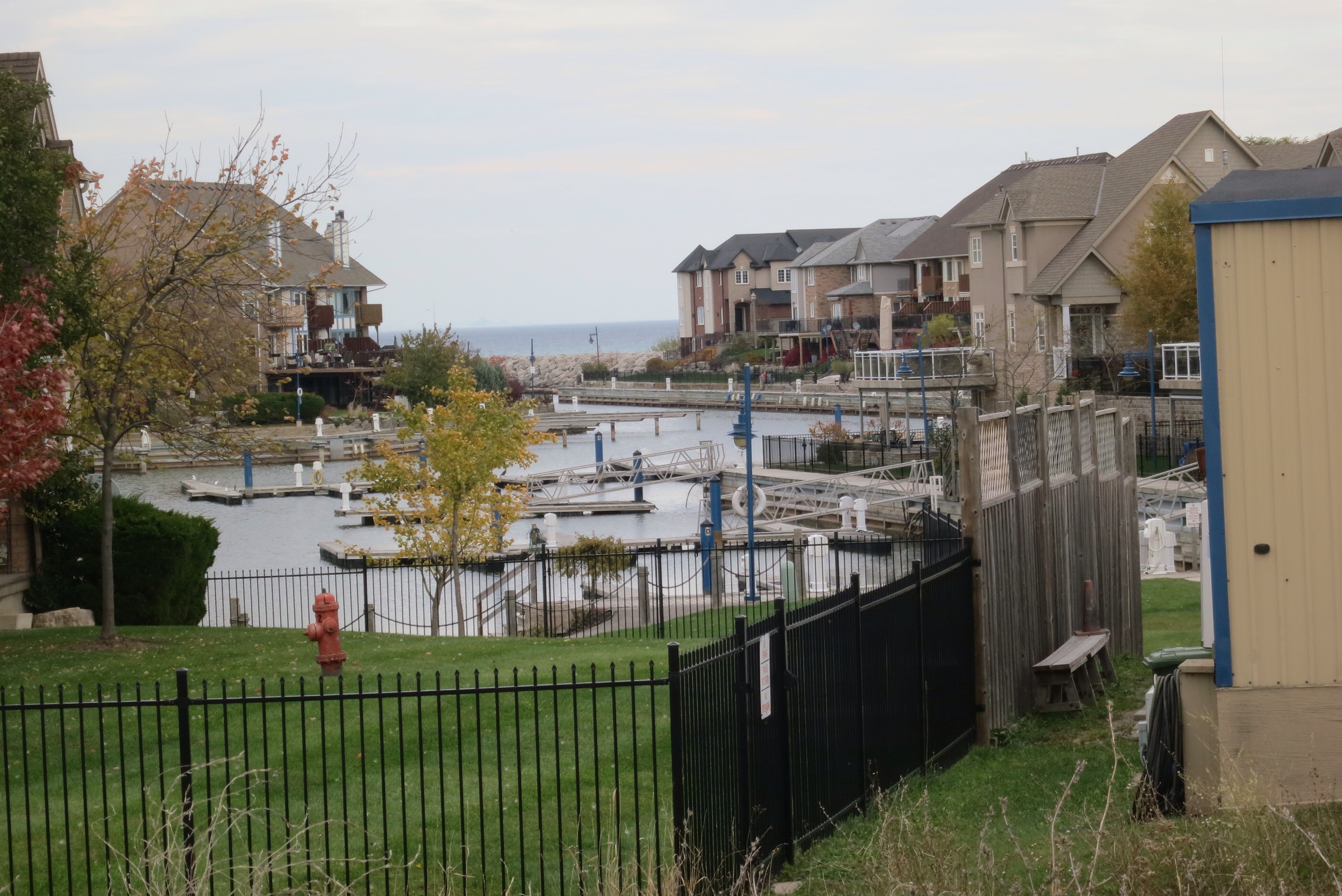 Here’s my doughty, Dutch crony, right at the edge of the lake:

Looking to the left, we would like to have walked along the lake here but it was deemed private property by these residences and gated off: 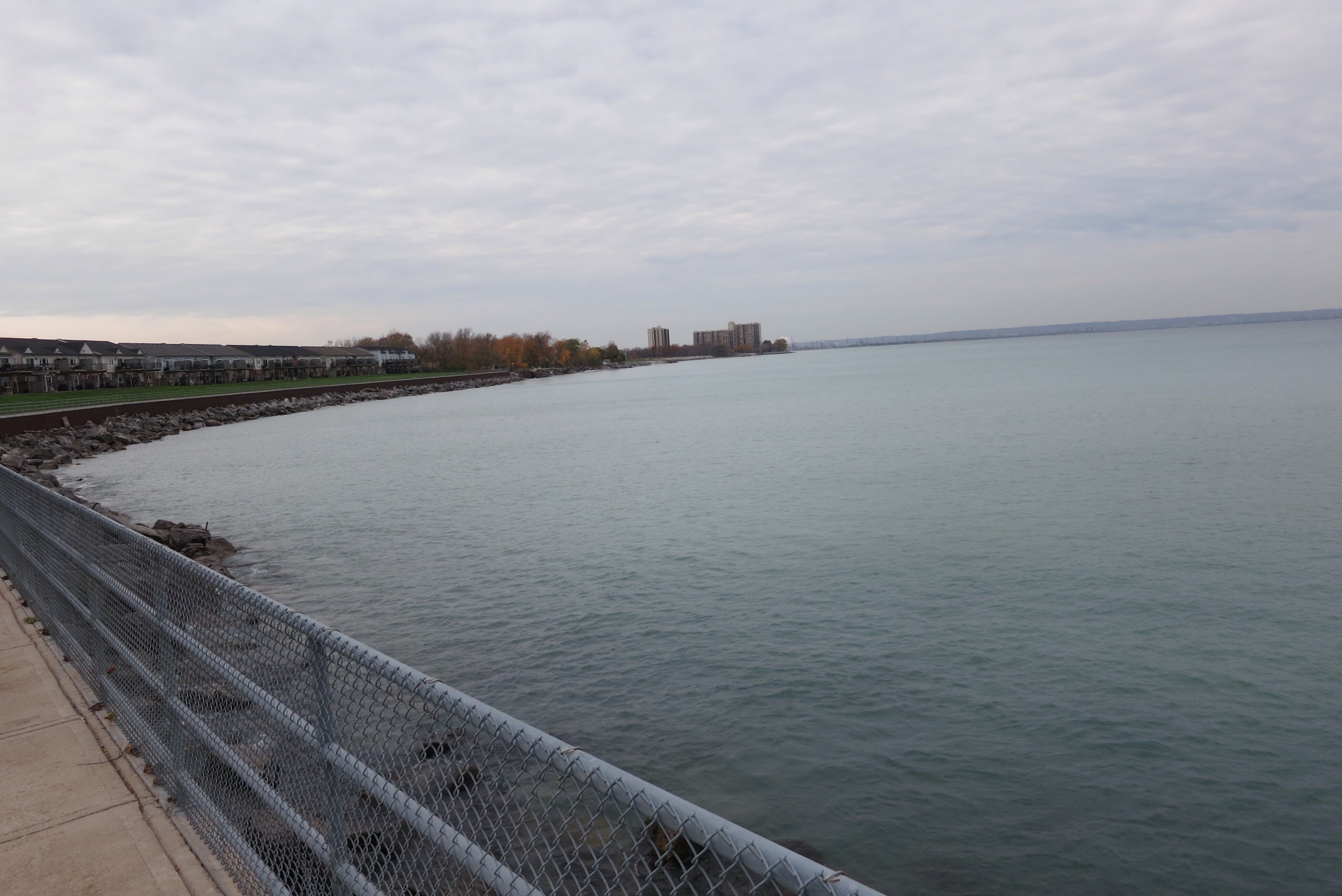 so it was out to the North Service Road again:

Eventually, however, we managed to find the entrance to Confederation Park: 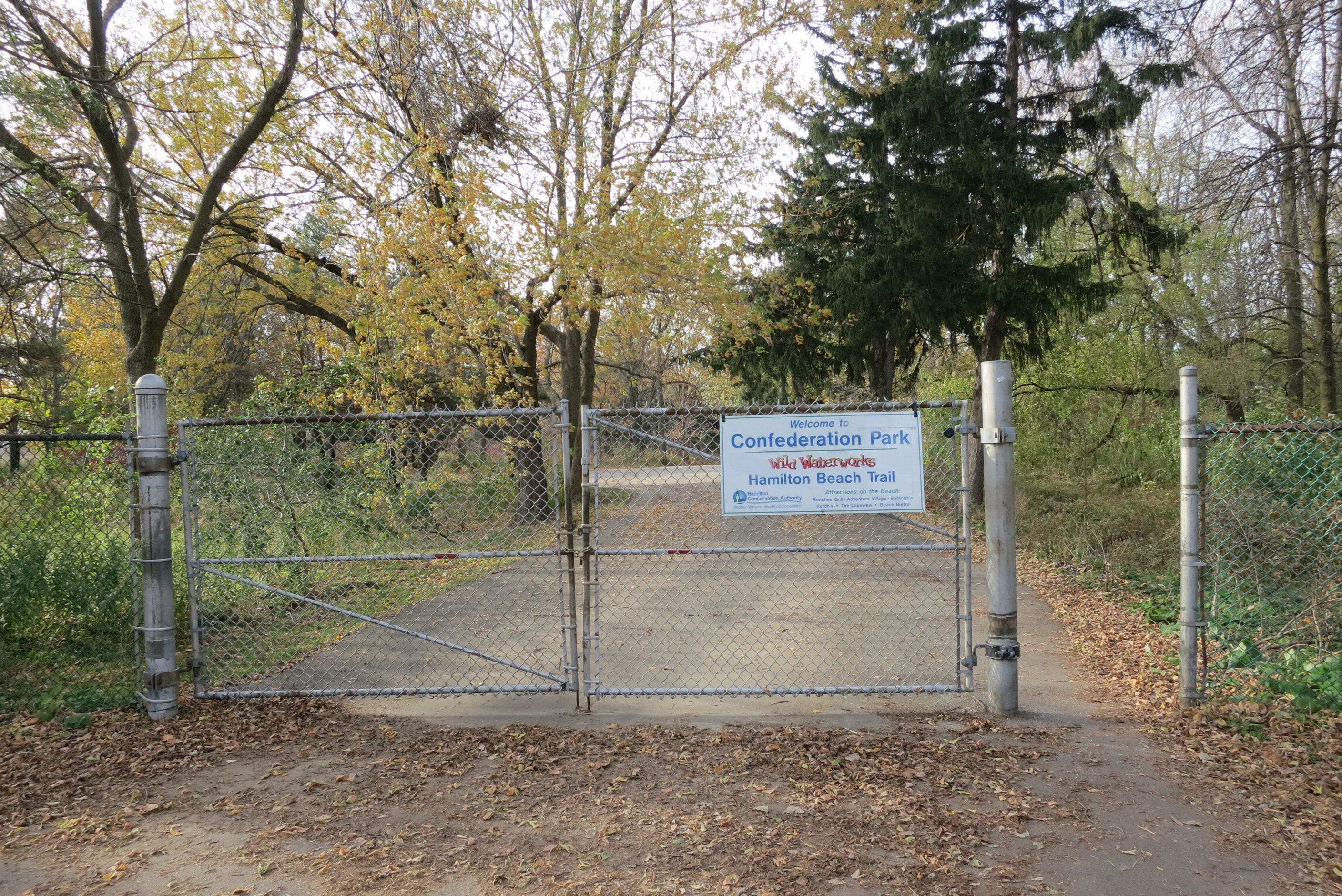 This stretch along the lake apparently used to be in a terrible, run-down state. It turns out that Ed, in an earlier career was part of the crew that was responsible for restoring the park to its current beautiful state: 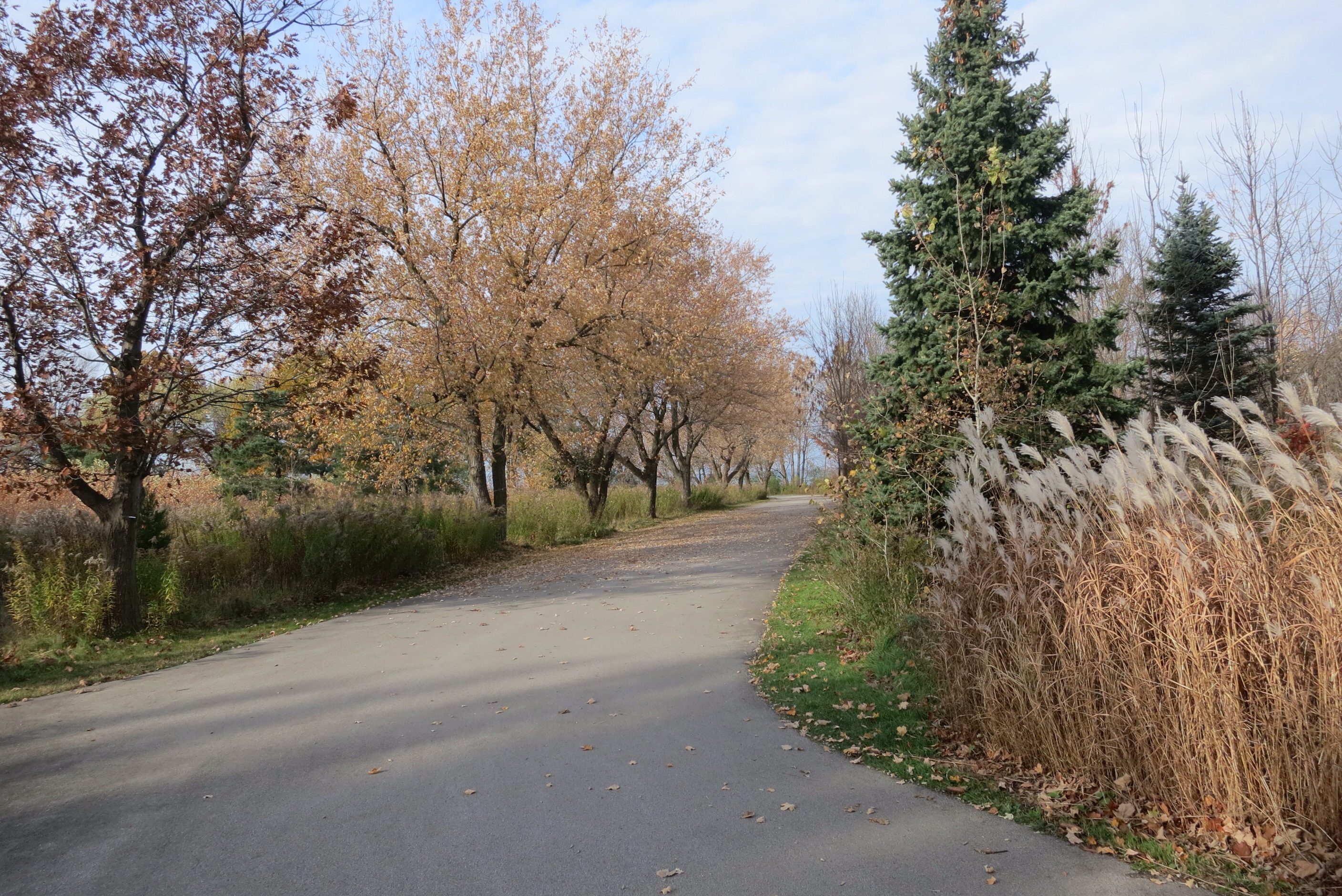 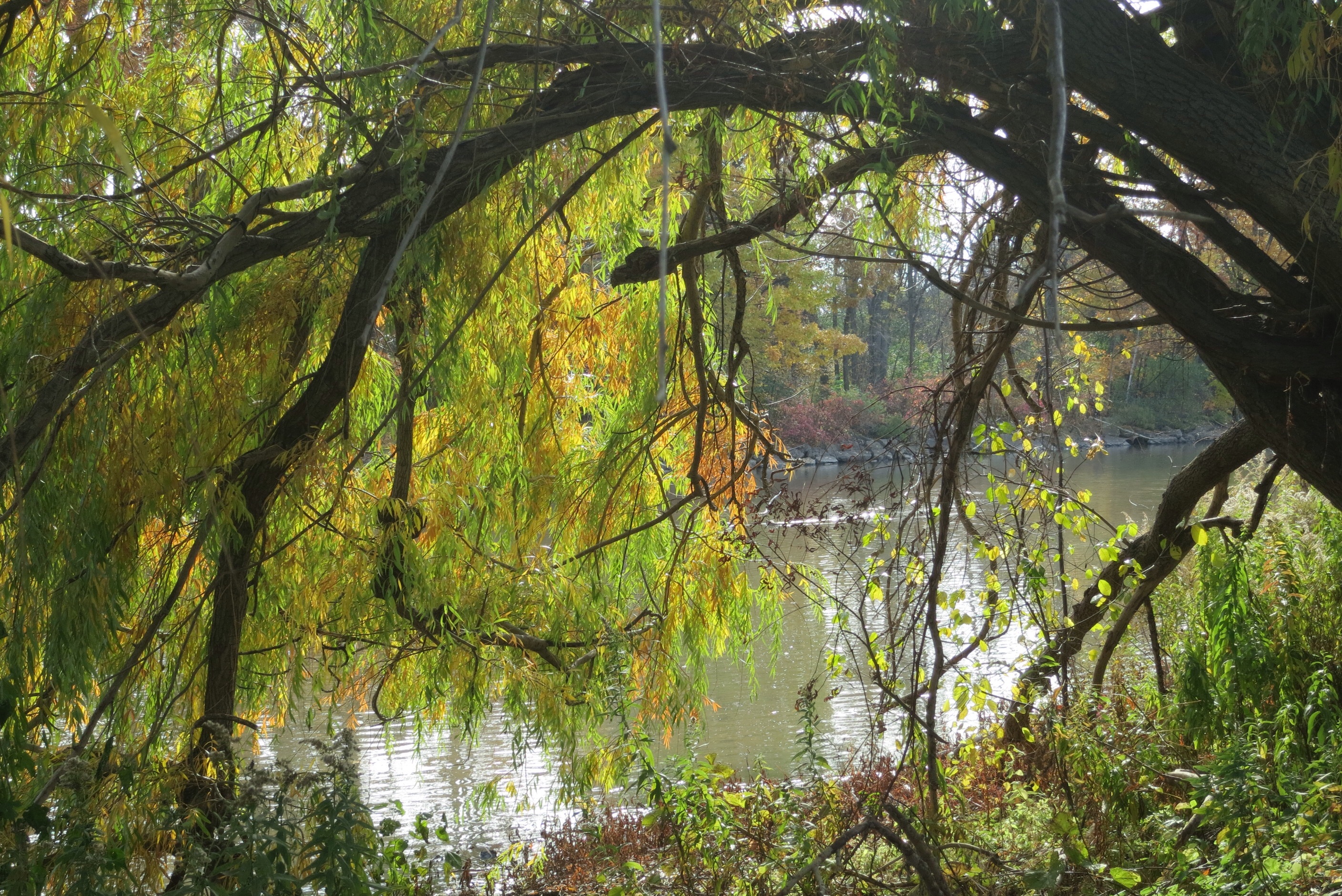 There were places to walk right to the shore of the lake: 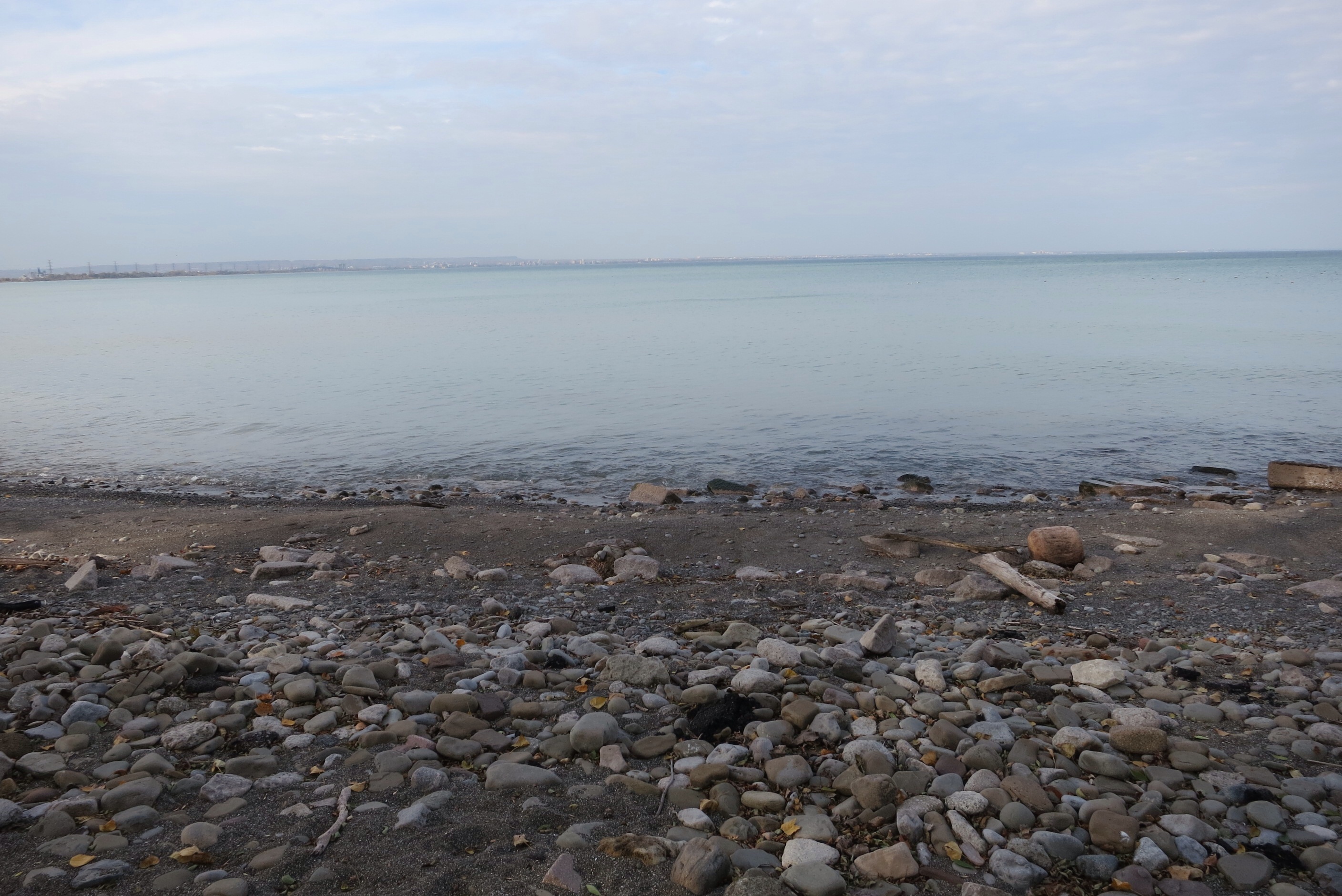 and opportunities to sit and contemplate:

Here is a tantalizing documentary picture showing a good part of tomorrow’s walk. You can see the Burlington Skyway near the center of the picture and the lift bridge to its right that I will be navigating: 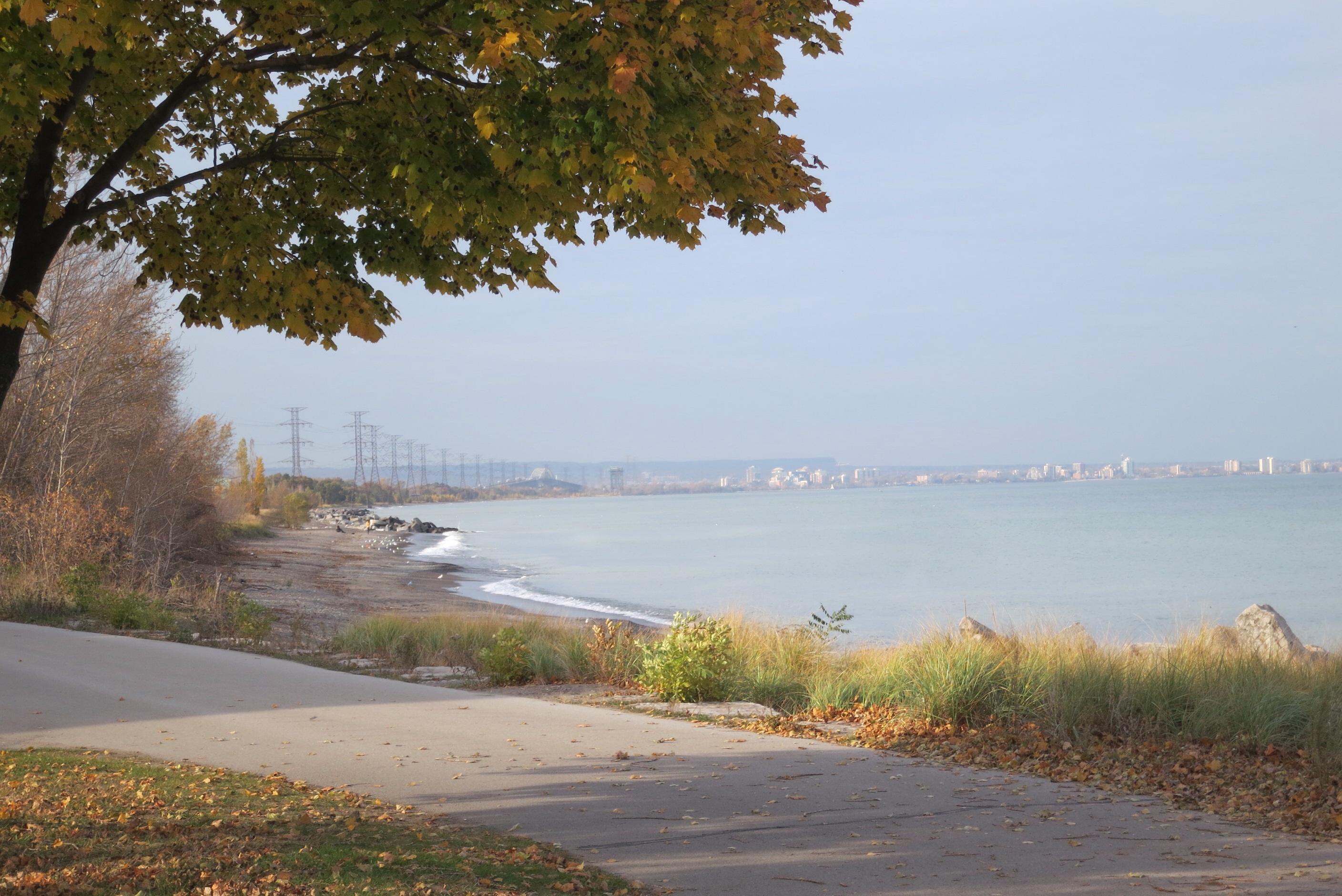 Who knew the place was so dangerous? 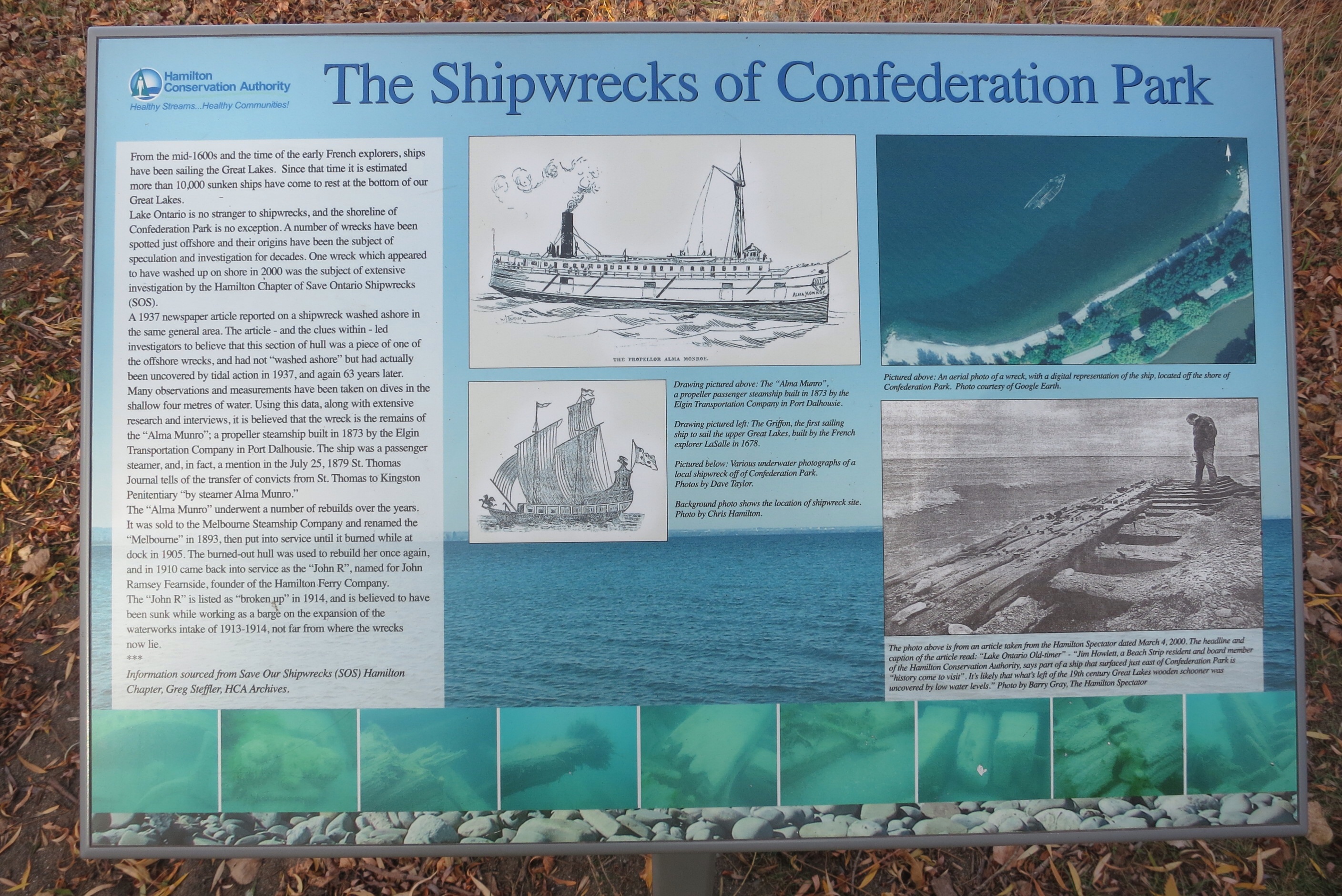 Here is a lovely gaggle of willows (anyone know the correct collective?): 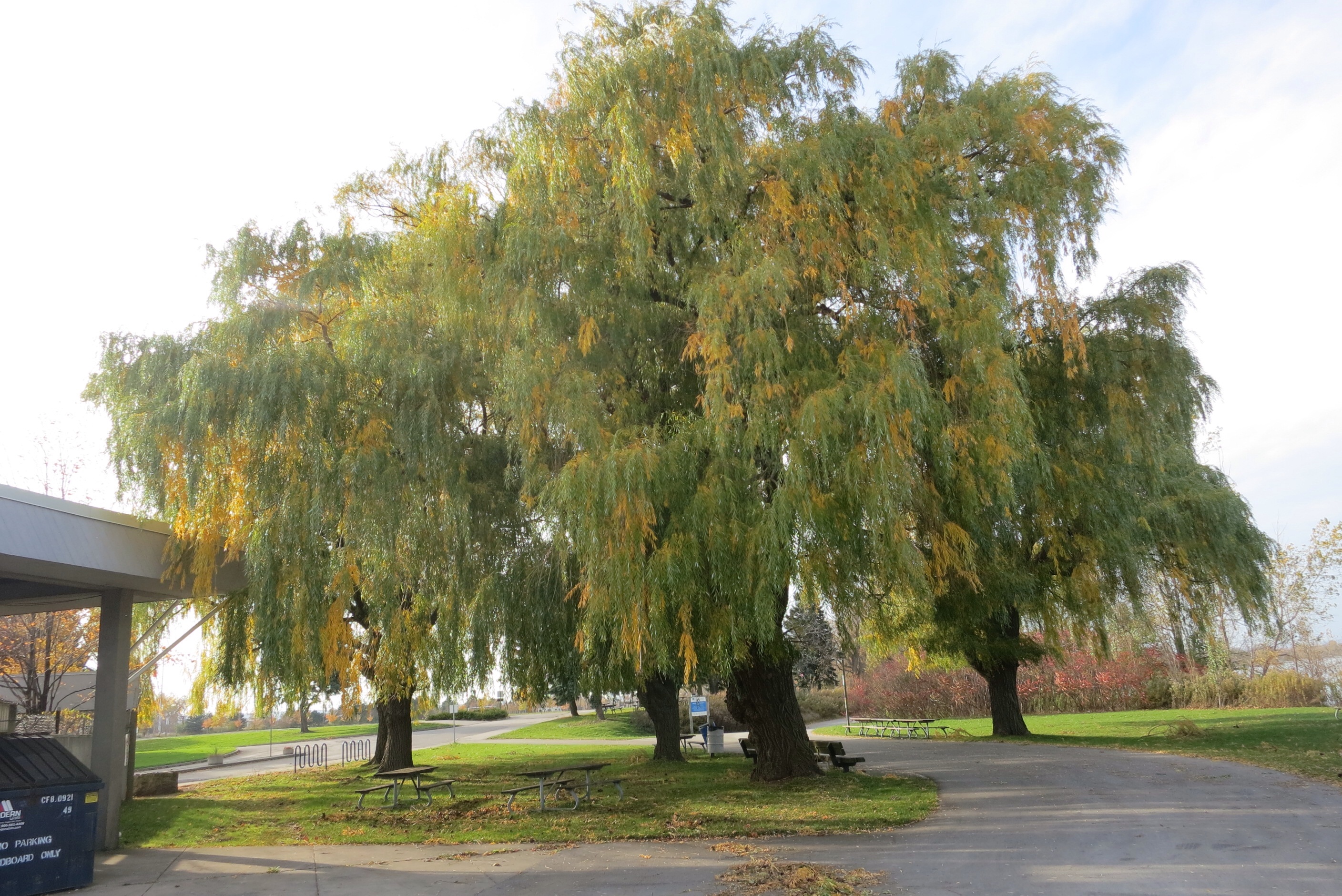 Just prior to stopping for the day I had a little staring contest with some gulls:

And to the left in this last picture is the little restaurant where we rested for a few minutes until Wilma arrived with the car, in which we scooted back to Ed and Wilma’s large, hospitable home and enjoyed some sweet fellowship. 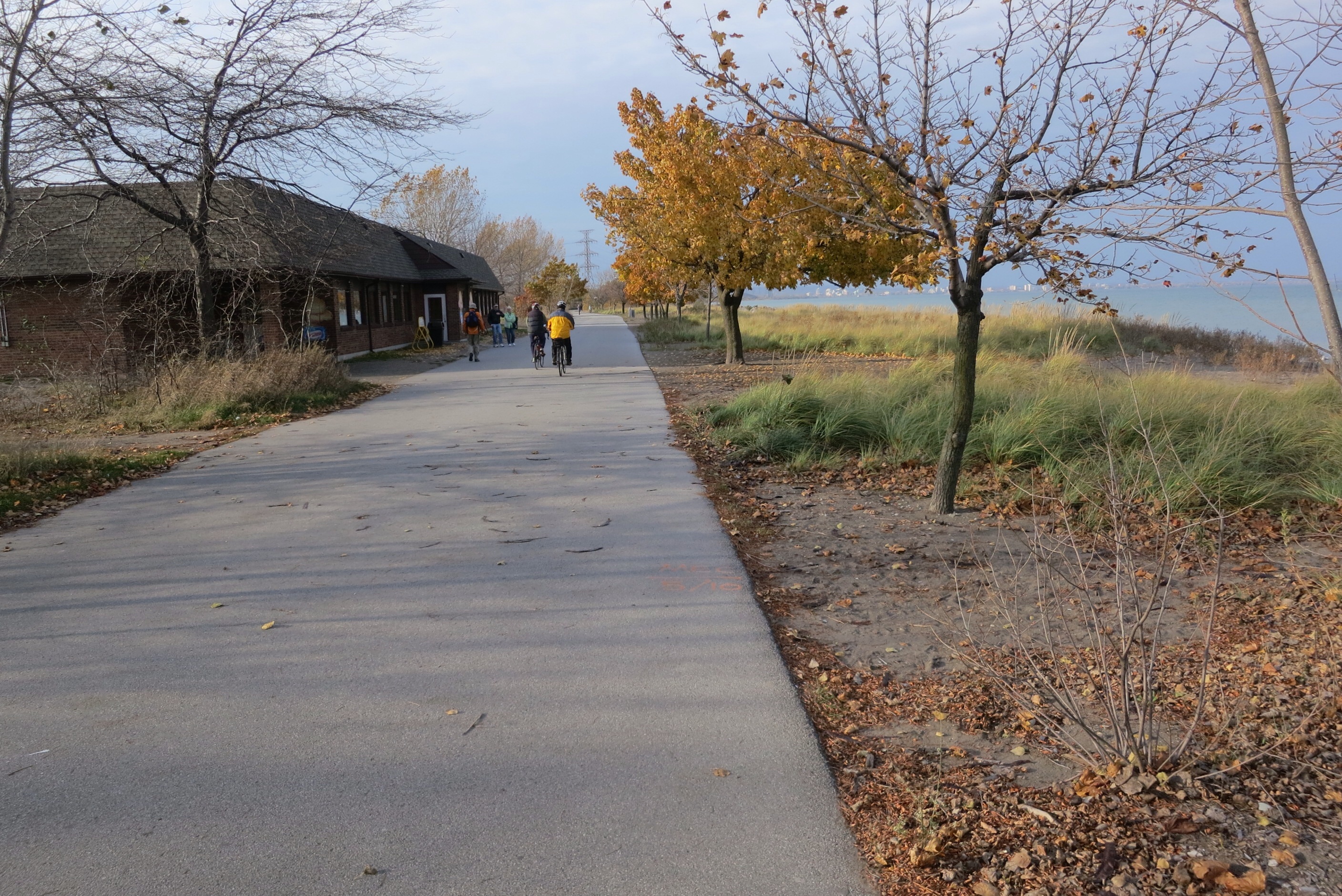