Terri dropped me off this morning at the spot where she picked me up yesterday. Very soon after that this old-timer stopped on the shoulder to ask me for directions:

This is not the first time this has happened and I’m always happy to oblige with my google maps iPhone. I think this guy was Jim and the look of delight on his face when I explained what I was doing was priceless. We decided that he should go left. He immediately got in his car and peeled off to the right. Go figure.

What follows is a set of images of what I saw today, often without comment — the beauty speaks for itself. 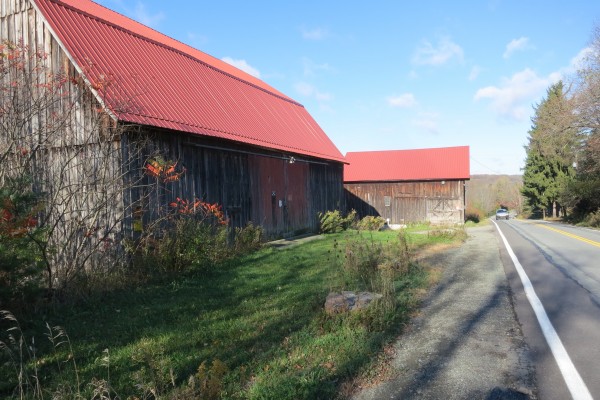 Lots of drinking water in them thar stainless towers: 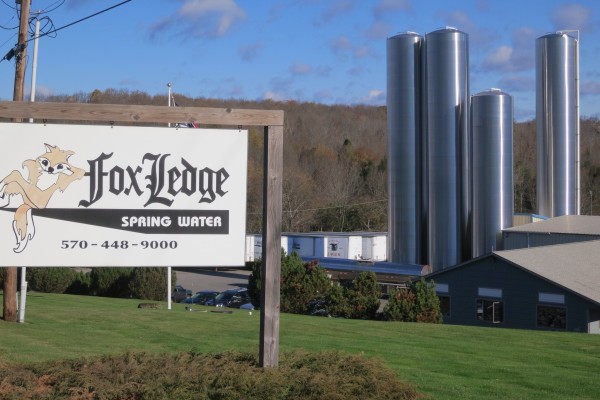 A creative idea if you have a guard rail outside your home: 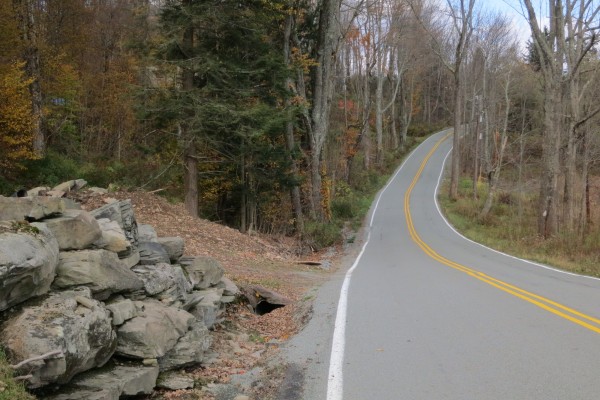 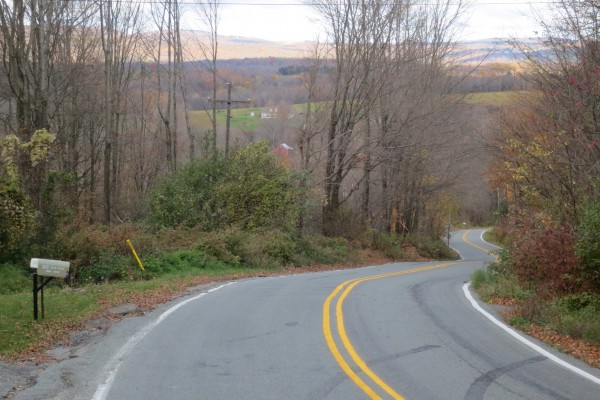 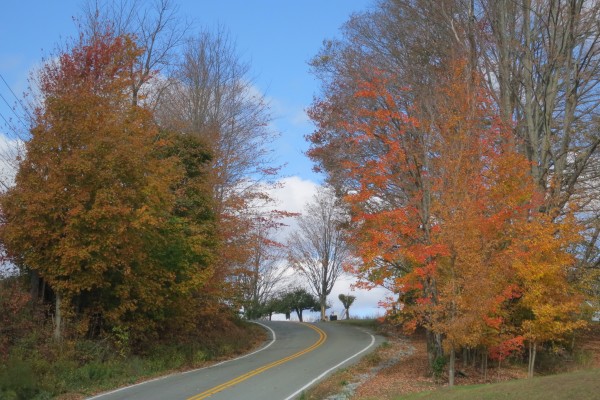 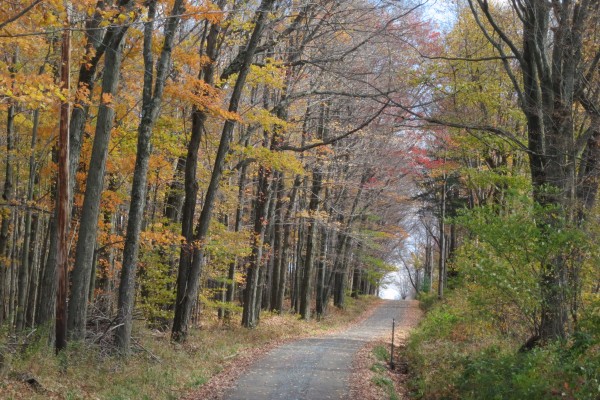 I couldn’t figure out what this water structure was; note the massive retaining wall on the left:

Here’s where it flowed out:

and this close-up shows a murky, oil-like substance being mixed in:

I have no idea what that is, but a little further on this sign at least clarified what the water structure was (I was glad not to have fishing tackle with me!):

“The road that stretches on ahead …” 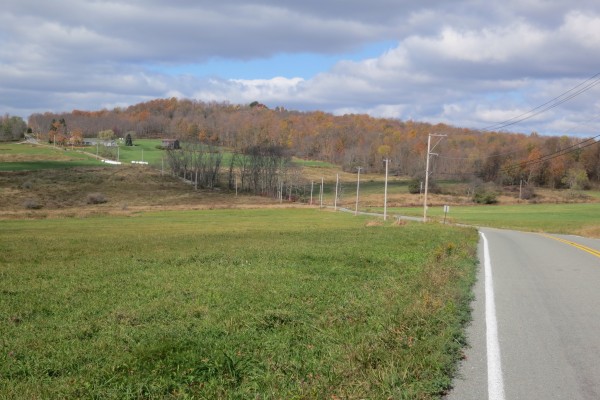 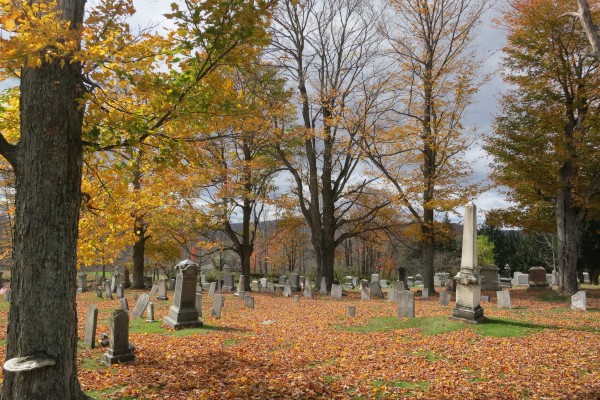 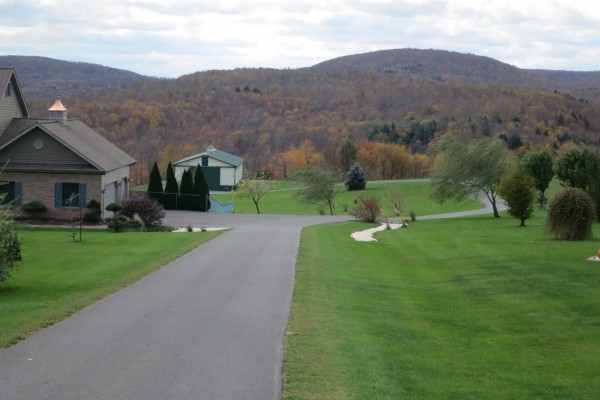 A turret for you, Alison: 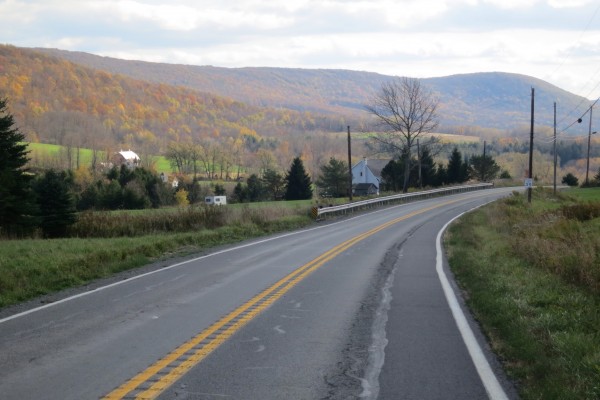 All of these pictures were taken during the first half of today’s walk, when I was on 670, heading for Pleasant Mount, where 670 joins with 371. It was a LONG slog uphill to get to Pleasant Mount and I was expecting great things. Instead, I got barked at by half a dozen dogs and all the shops were closed and for sale.

I had almost reached the 10-mile mark by this time. I have been finding that I reach a bit of a wall at this point, and that further progress requires more of an act of the will. This was especially true today when I turned north on 171 and all the earlier beauty was replaced by a series of (mostly) trashy shacks, albeit intermingled with a few nice farms.

My daughter Diana is to be in the vicinity this weekend for a “Fall Teen Getaway” at Camp Iroquoina, and is bringing with her a few things I’ve asked for (as well as taking home some things I shouldn’t have packed in the first place). She has promised to drive over from the camp on Saturday night to wherever I am and bring me to the camp for a shower and good night’s sleep.

So at midday today I thought — why not do the same tonight? I phoned over to Joe Plantz at camp and asked him a big favor — would he be willing to pick me up and drop me off tomorrow? It ended up being a 30-mile drive (each way) for him, so it was a big sacrifice. I probably shouldn’t have asked in the first place, and just camped out on the property of the first trashy shack owner that would have me. But I’m sure glad to be here now; familiar ground and plenty of familiar faces. Here are a few that some of you will recognize; the indomitable Joe Plantz is on the left:

So it was a super day today — a record nearly 18 miles, terrific weather. The only real downer is that I developed a blister on the side of my heel, probably because I didn’t heed the advice of several people to switch my shoes every day. But I’ll deal …