We left Brad and Carol’s house at 6:15 this morning so it was still dark as we said good-bye at the Dunkin Donuts pick-up/drop-off point. I was quite content to spend the next hour or so catching up on email using the DD wifi, and the DD staff saw no problem with me doing so. Around 8 I was on the road again, intent on reaching the border.

The day went in two entirely different, though roughly equal segments, a long, straight run to the Niagara River and then a run up the river to the bridge. Coincidentally, this was exactly correlated with great walking weather on the first part and miserable rain (really the first for my trip!) on the second. It was very hard to pull out and use the camera during this second portion so most of my pictures are taken during the first half of the day.

This picture is pretty representative of the first part of the day — overcast with a long, straight, residential road.

Along the way were one or two spectacular houses, including this one with a gazebo-style porch:

There was one section, about a mile long, where drain sewer work was being done. This was difficult to navigate in the presence of traffic:

If the work isn’t completed soon, some of the houses on that road will have hockey rinks:

As usual, most leaves had fallen with a few notable exceptions: 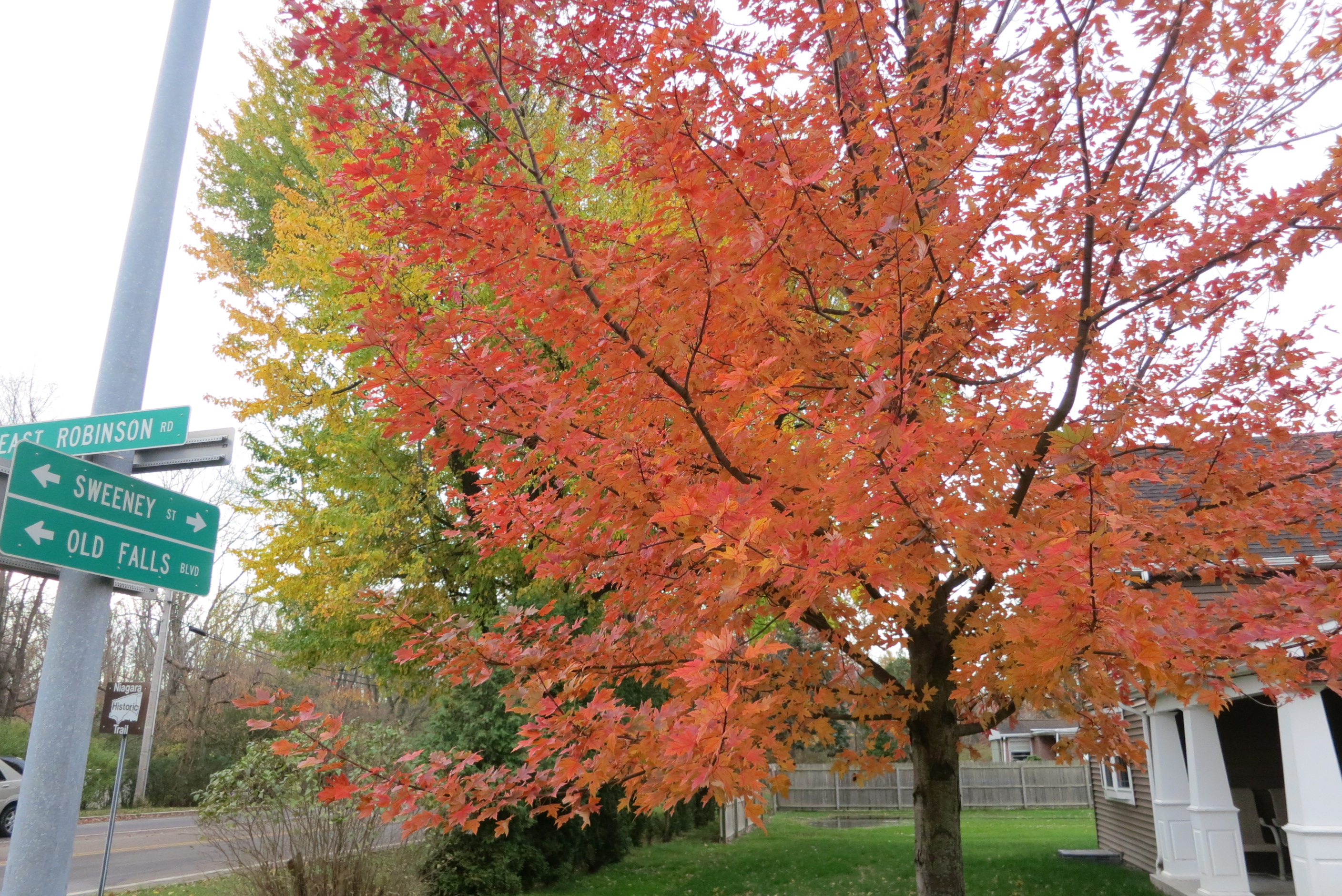 I dropped into Hock’s Flower Shop to ask permission to use their restroom:

these two women sympathetically agreed; this is Marie and Faye: 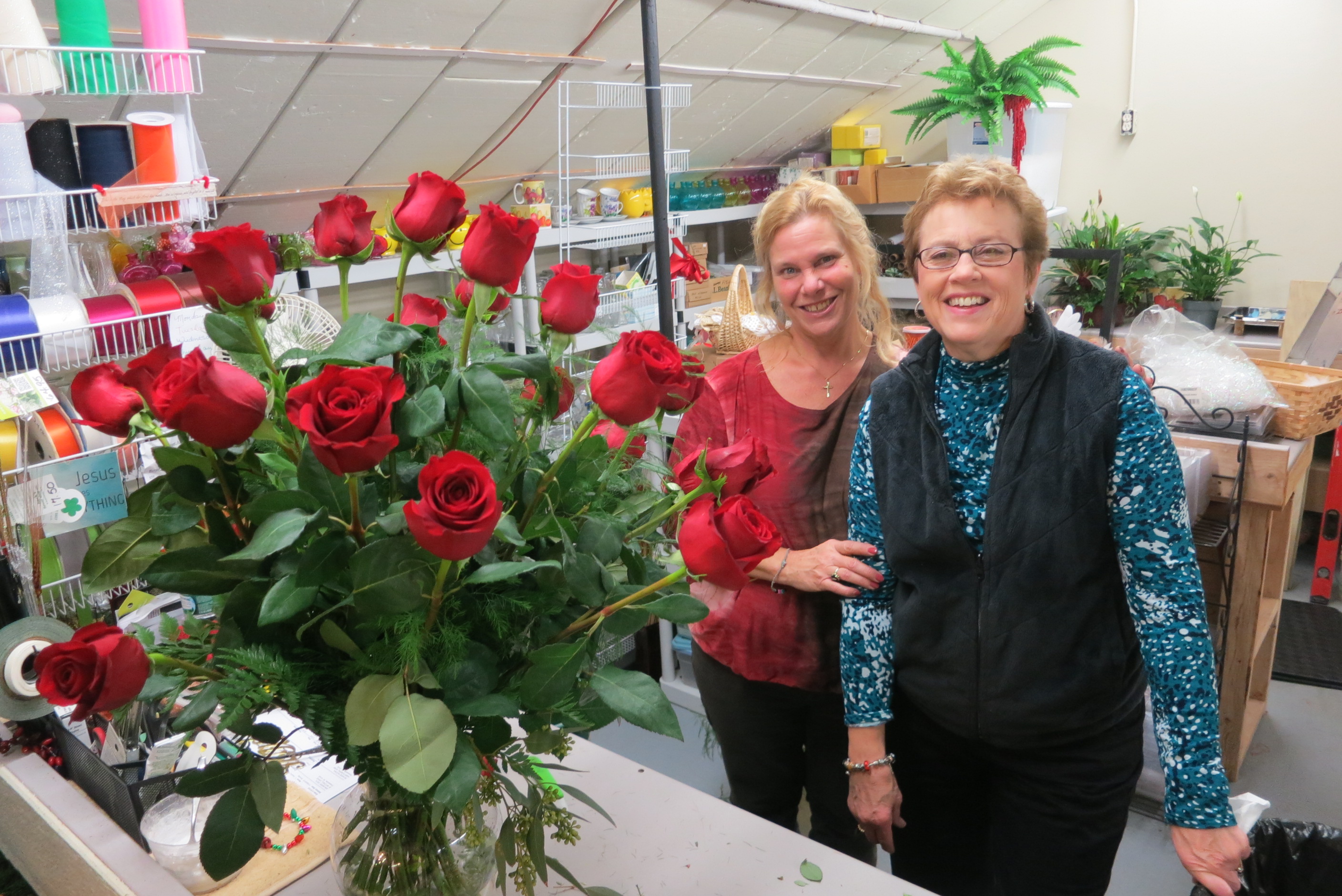 Faye and her husband Kevin own the shop, which was originally started back in 1922 — quite old for a flower shop:

They were very interested in my walk and we took several pictures of each other. They have published a few on their facebook page.

Further on I encountered a busy farmer’s market. Check out all those apples: 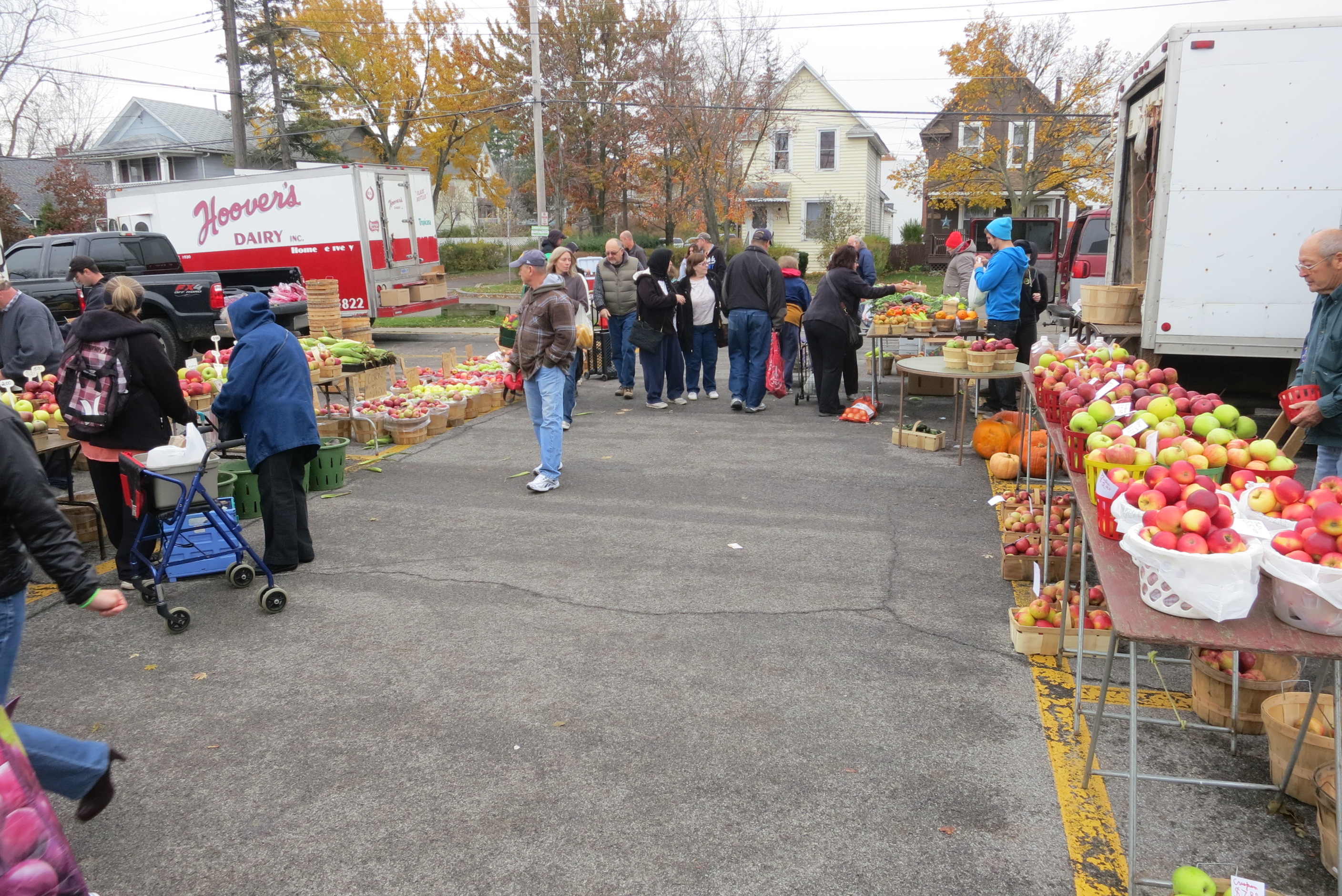 After checking out all the stalls I drifted over to the hot dog guy, Glen, and bought a couple of chili dogs. When he heard what I was doing, he said that when he was younger he had walked from Buffalo to Detroit, 12-hour days, with a friend, wearing a dress, and that he was burned and blistered so badly at the end that his doctor could see bone when he lifted up his toes. Here’s Glen:

I really enjoyed the brick color in this church: 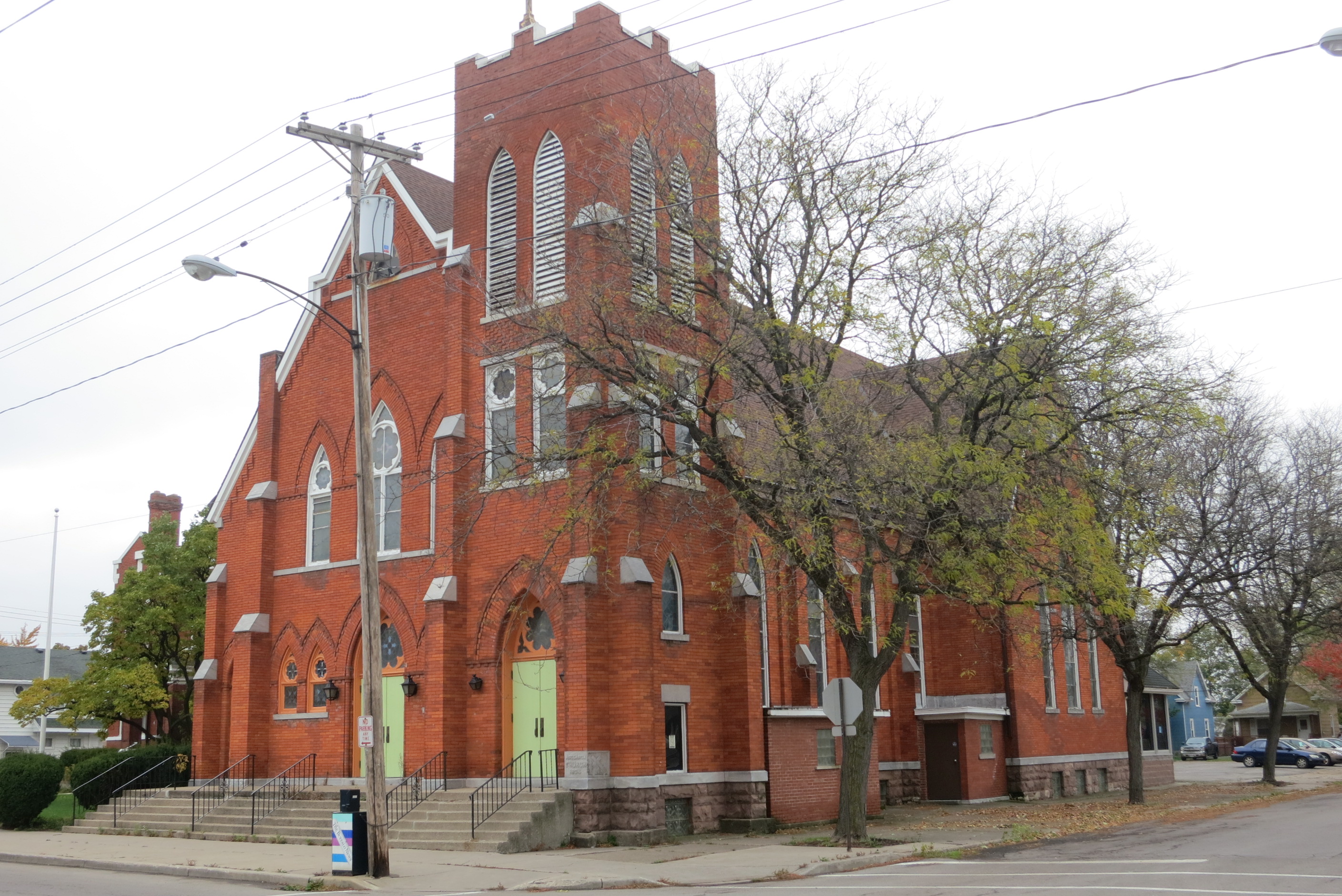 Meet, from the left, Mike, Rhys, Ron and Dan. They were curious about what I was doing (pretending momentarily that I was a security violation), so we had a good conversation about it.

At that point I had reached River Road, the second half of my day; here is the Little River, a branch off the eastern branch of the Niagara surrounding Grand Island: 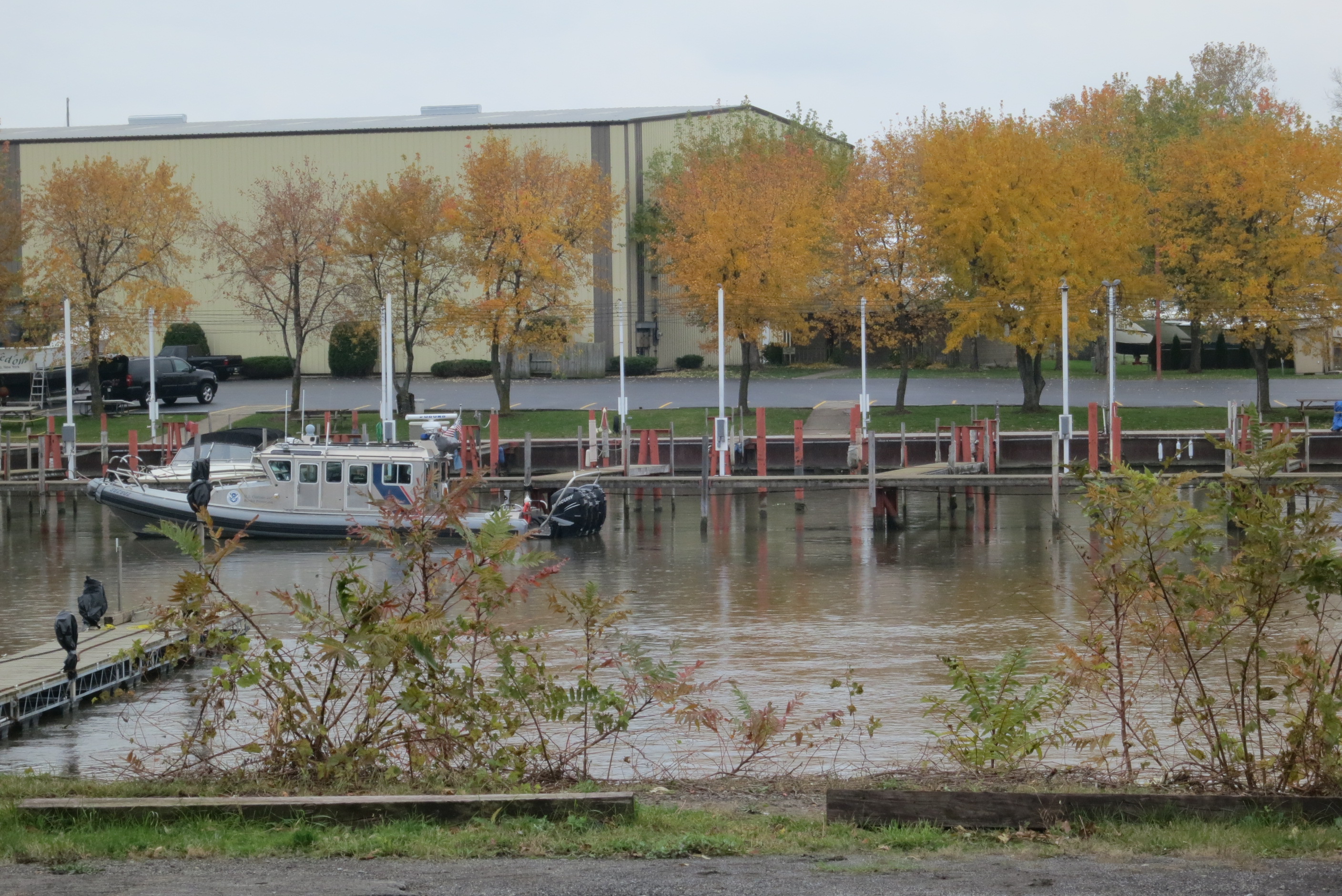 Here’s a sign whose meaning I couldn’t even guess: 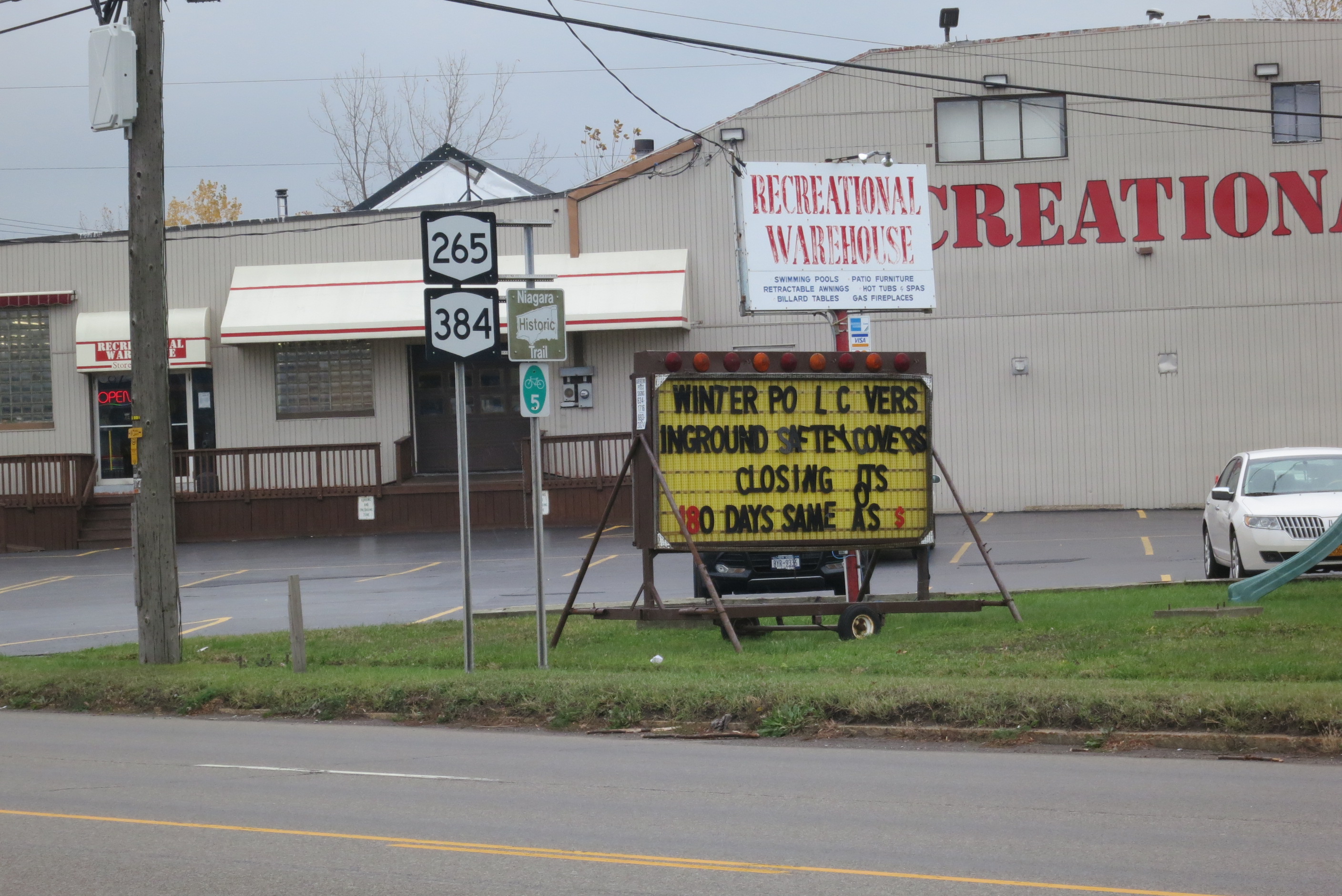 At this point it started to rain — serious rain. I pulled into a park gazebo and suited up with all my rain gear, including rain pants that made it quite difficult to get out my camera. So for most of the rest of the day I have no pictures.

I did make the effort to pull the camera out for this shot of I-190 crossing over to Grand Island, since I have crossed it so many times in the past: 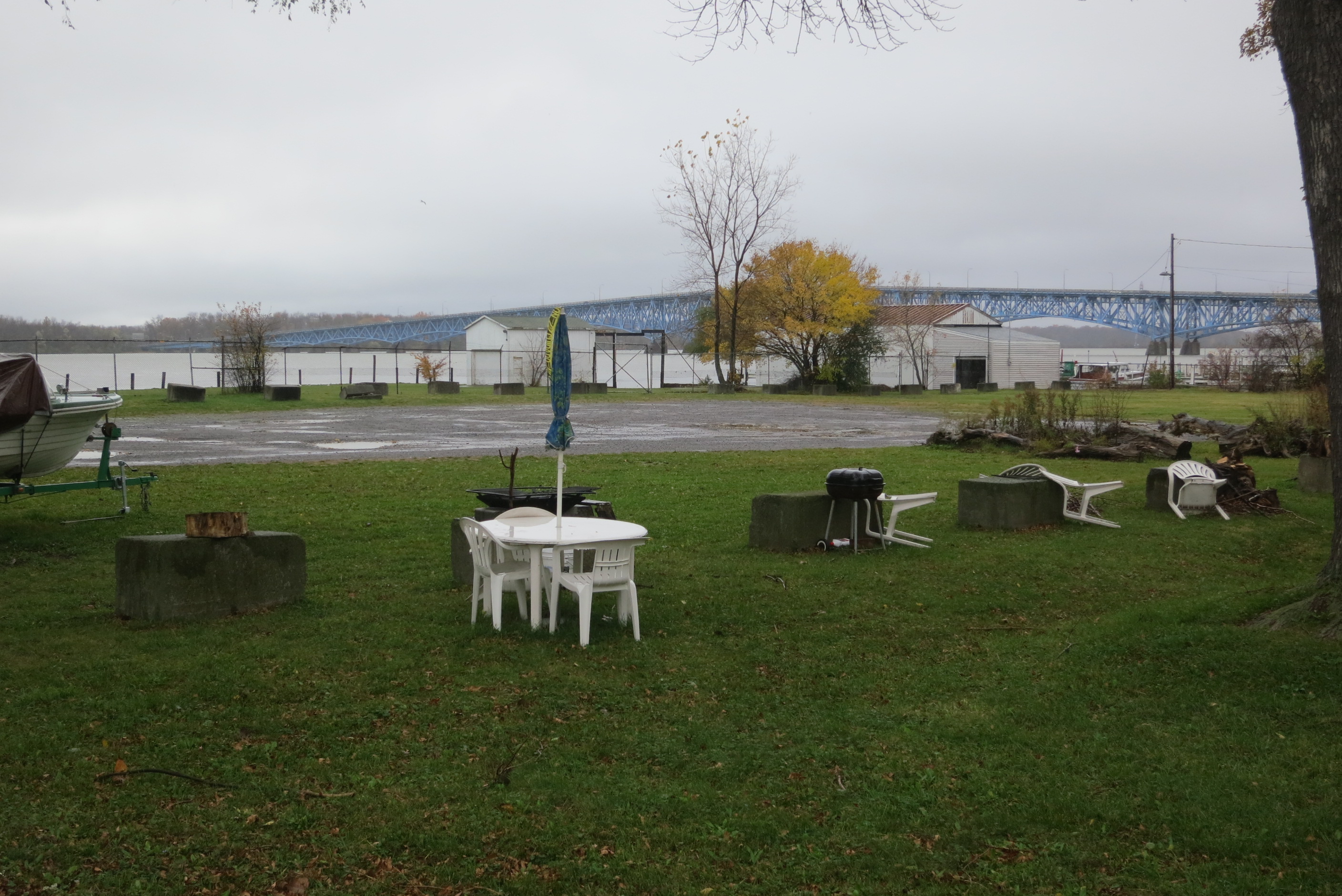 It was a pretty intense 9 miles walking in the rain, but I pressed through. At one point I asked permission to use the bathroom at the Sunshine Cafe. They said ok; I must have looked pretty cold and soggy so they gave me a free cup of coffee.

It was with mounting excitement that I turned onto the final street leading to the Rainbow Bridge. Camera out again, I snapped this large casino: 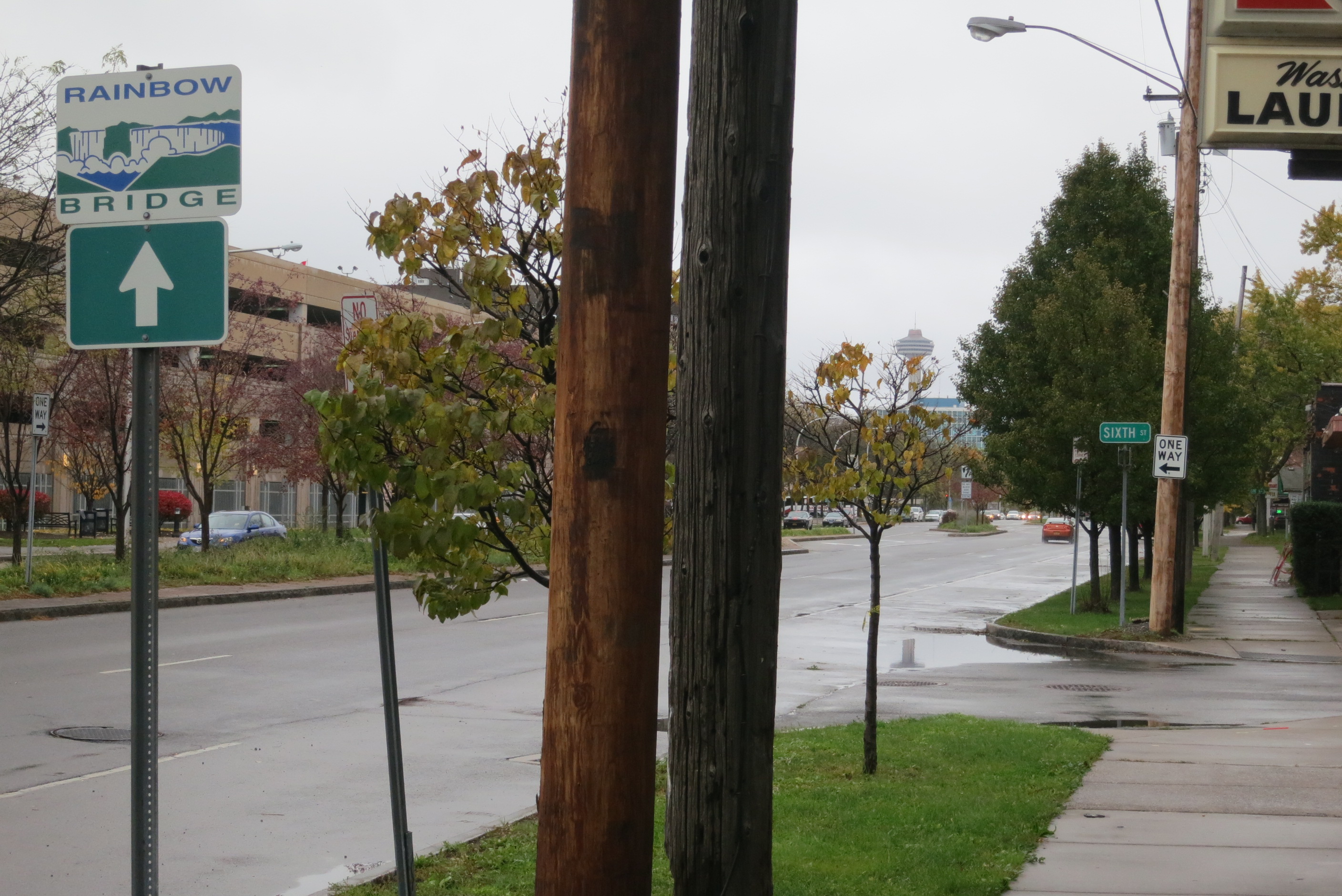 When I got to this intersection, right at the bridge, I thought I was done:

but I then spent another 20 minutes trying to find the pedestrian entrance. It was tucked away in an obscure place with no obvious signage, and I was getting a bit worried. But then it finally appeared: 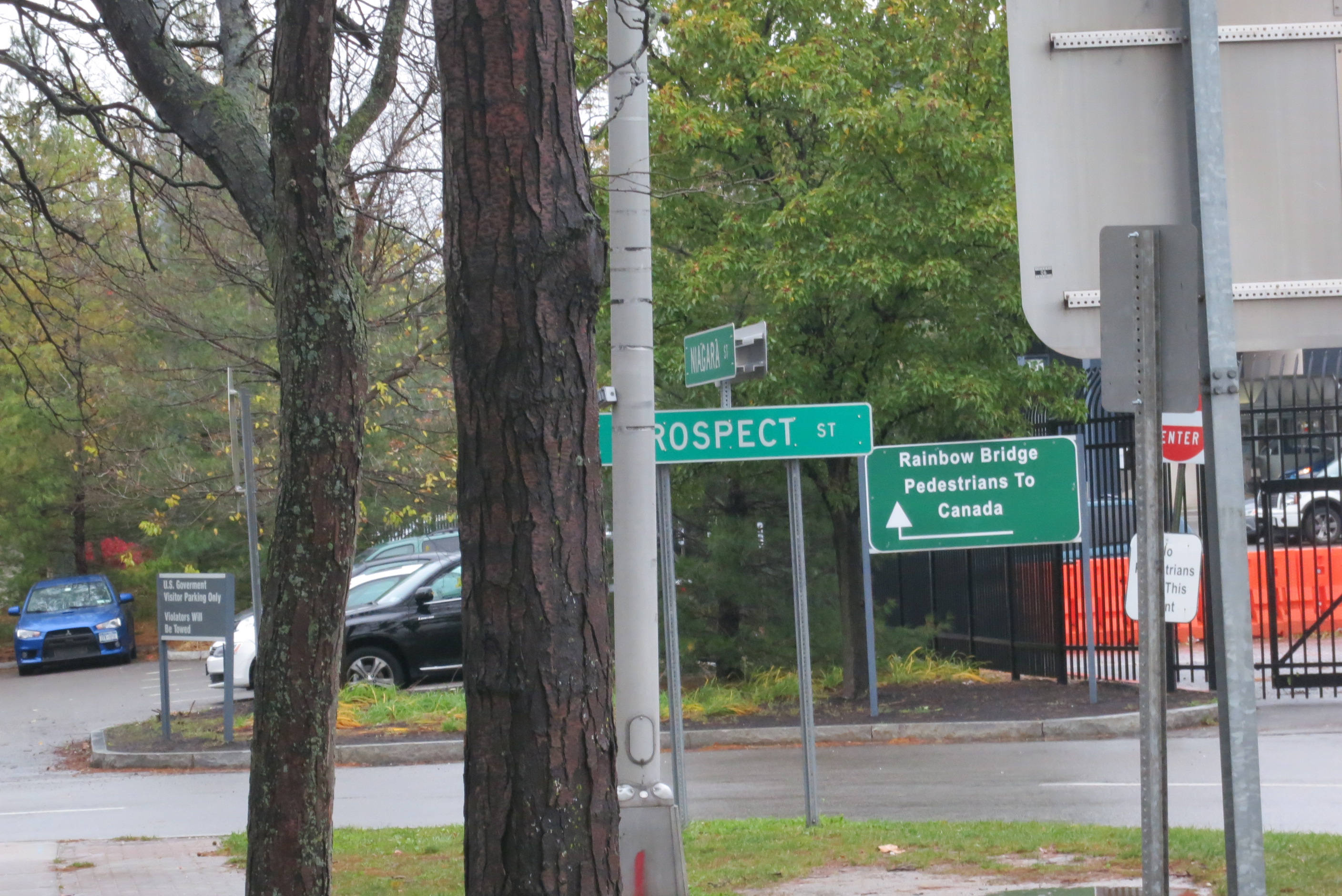 Here’s the pedestrian walkway, just before I entered it:

The last hurdle was a six-foot turnstile that my cart would obviously not go through. As I was mentally calculating how to break it down, hug the collapsed frame to my body while dragging the bin behind me, a kind tourist pointed to the button on the wall that, when pushed, triggered someone inside to open the gate for wheelchairs. Doh.

The view from the center of the bridge was spectacular:

And so I entered Canada, after 25 days of walking:

I have to confess to being a little weepy at this point, I suppose mostly from relief but also just from a deep sense of accomplishment, and perhaps a little nationalism related to my Canadian roots.

The border guard, Carter, wouldn’t let me take his picture, but enjoyed my answers to his questions. Where are you from? Scotch Plains, New Jersey. How did you get here? I walked. It was a great, happy moment, and he shared it with me.

As I walked out to the street I was greeted by my two sons, Peter and Matthew and my dear brother-in-law, Russ; I had been delayed on the other side, they had been delayed in traffic, and we all arrived at the same time at that spot. It was a frantically happy reunion. Carter came out and helped us take photos, but I forgot all about my camera until it was too late, so I have to include the following picture, which even with the help of my technical guru Matthew, could not be made rightside up:

If it were the right way up, that would be Russ, Matthew, me and Peter from left to right. Here is one of just me in that wonderful moment: 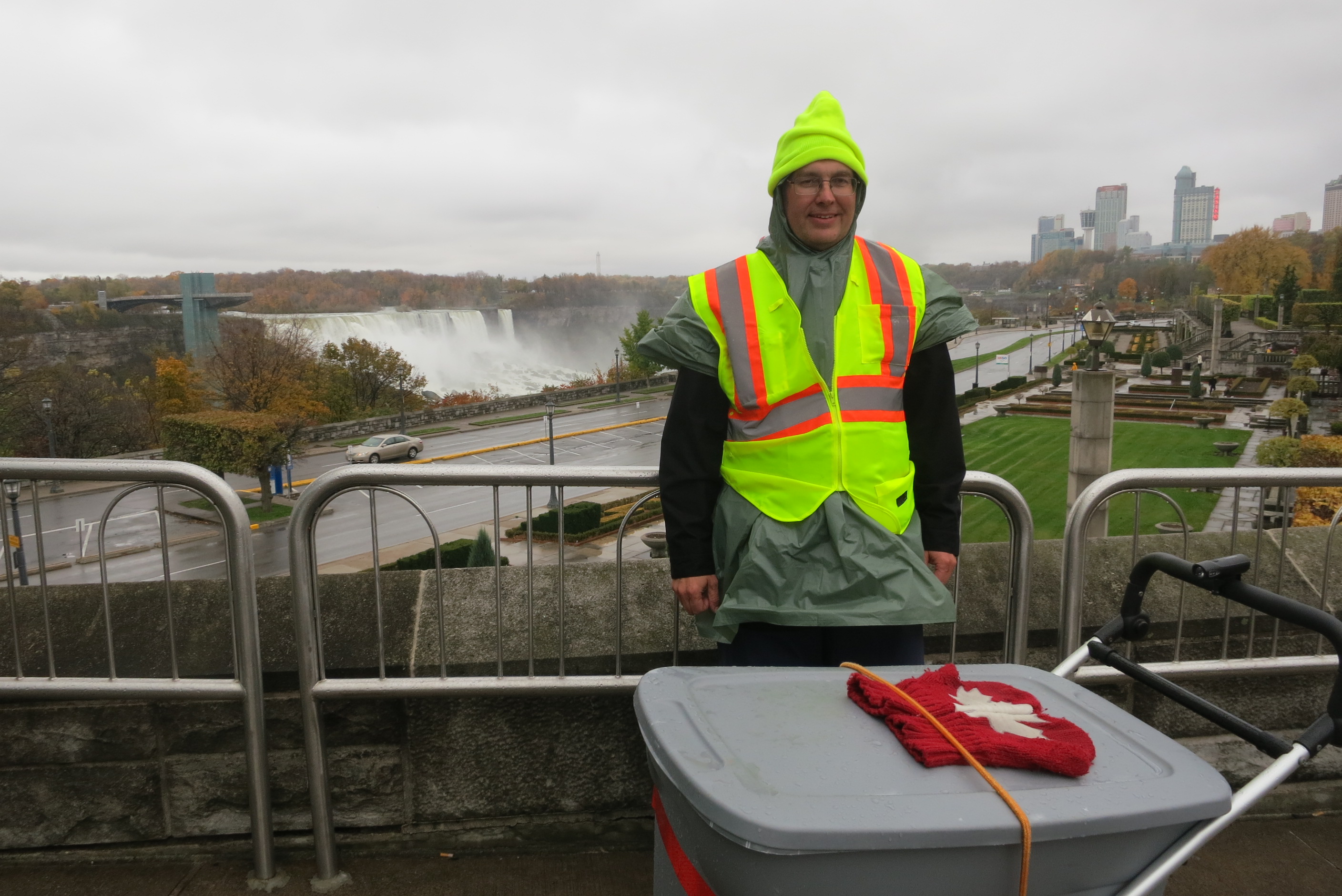 The three of them whisked me off to Niagara-on-the-Lake to lovely accommodations and a fabulous dinner and I will have to tell you about that tomorrow because I’m so tired now.