On Wednesday, October 9, just a little after noon, I walked out my front door in Scotch Plains, New Jersey, determined to walk all the way to Toronto, a trip of close to 500 miles. After 32 days of walking, with just one day of rest, I arrived at the home of my grandchildren in Toronto, on Saturday, November 9.

The execution of this plan was simple in principle — walk about 15 miles each day and after about a month it will be done. There were definitely logistical problems to be solved, like planning what to take with me and how to carry it, where to stay, what to eat, and so on, but once these were out of the way, it seemed like a fairly routine exercise to execute the plan.

But that description is merely mechanical. So much more was going on with me as the days went by. I would like to finish this blog by mentioning a few of those things now.

An aspect of my journey that took me by surprise was what an integral part of it was this blog. My initial intention was to post a few pictures each day so that my family and friends could keep track of me. But I found myself actually wrapping a narrative around those pictures that, together with the novelty of what I was doing, seemed to attract many interested viewers to the blog (I believe more than 3000 unique visitors, if Google Analytics can be trusted).

As is common with blogs there was the possibility of viewers making comments. I found myself eager to read those comments each evening, and I tried to respond, however briefly, to just about every one. As the days went by I grew increasingly appreciative of the interest and encouragement shown by so many — I’m actually tearing up a bit as I write this.

Then an amazing thing happened. Each day as I was walking, I felt as if all my readers were actually with me on the road. I felt like one of those tour guides you sometimes see with a little colorful flag or umbrella, leading a group of tourists around. Every time I saw something interesting enough to photograph, I felt like I was pointing it out right there to my readers. I composed little phrases or sentences in my head that I would use later in the blog, but it was as if I was saying those things to those I imagined were right there with me.

This transformed the trip for me from a lonely adventure to a joyous stroll through the countryside with friends. It was completely unexpected and as I saw it happening it made me more and more determined to write up my adventures each day. I only failed once (but recovered the next day), and that was probably for me the low point of my trip, emotionally.

So I just simply want to thank each and every person who took the time to speak to me when I was “out there” — you all helped to make my adventure our adventure and I feel a special kinship to all of you, many of whom I have never even met.

I mentioned the loneliness of the trip. This was also a surprise to me, and one I discovered very quickly. One of my readers helped me understand the difference between loneliness and aloneness; really I was experiencing the latter. I was very much alone for virtually all of the time that I was walking each day, in spite of the many cars and even other walkers going by.

Occasionally, however, I would have an opportunity to interact with people. Sometimes this was as simple as someone asking me what I was doing — I think I made quite a sight with my modified jogging stroller and clothing that made me look like a highlighter pen. Other times it was staying the night with a family. But because of the predominant aloneness, those human interactions became very important to me and I found myself interacting in a far more intense way than I normally do. I was so appreciative of their attention and I was so interested in hearing their stories, which were varied and fascinating.

I found myself contrasting the long periods of aloneness with the shorter times of intense interaction and it seemed to me that in normal life we live somewhere in between these two extremes, almost in fog of insular familiarity. This trip has made me want to savor more fully times of aloneness and be more intentional and deep in my interactions with people.

Of course, the most profound interactions were with people that allowed me into their homes. I was truly overwhelmed with the hospitality shown to me. Before I began the trip I tried to plan out where I would stay each night, but because of the unpredictability of miles traveled or route taken, I ended up planning only the first night in advance!

This meant that lodging arrangements had to be made “on the fly”. This in itself was an exhilarating experience. For me, as a Christian man, it was a deep confirmation of Matthew 6:25-34, a part of the famous Sermon on the Mount, in which Jesus ends by saying “do not be anxious about tomorrow”. That’s an easy thing to say, but when you don’t know where you will be staying at the end of the day, it becomes quite difficult to practice.

But each night I did have a place to stay. I camped three times and I stayed in a motel nine times, but on the other nights I was with other people in their homes. Each time this happened I was freshly grateful for the hospitality shown to me; I hope this came out in my blog. This was where I met so many wonderful people and made new friends. I thought of listing them all here with their pictures, but I would like the daily blog itself to be that testimonial to the unfailing generosity shown by these people.

My wife and I try hard to make our home a place of hospitality, but after this trip I’m more determined than ever that this shall be the case. And I really hope that I will have opportunities to open my home to strangers, like so many did for me. I have made a number of new friends and I hope that Fiona and I will be able, in the coming months, to travel by car this slow route between New Jersey and Toronto so that I may have the opportunity to introduce her to these new friends.

The end of my journey was very moving for me. Friends and relatives joined me as I got closer to my destination (including my friend Paul who had driven all the way from New Jersey with his wife Laura, to walk the last day with me), a cheering crowd met me a quarter mile from the finish line, my granddaughters gave me hugs, and in the evening my sons had arranged a surprise party attended by many wonderful friends and family members. It was held in the home of my dear friends Russ and Ali (Ali is Fiona’s sister), who themselves are the absolute model of hospitality, and who worked tirelessly the entire evening to make it a beautiful event. My brother Jonathan said some very kind words about me. It was the perfect end to the adventure of a lifetime.

Some people I met asked me if I would be walking home. I just had to smile at that. Some have asked if I will do another journey like this. I certainly feel no inclination at this point, but Ed Gringhuis (Days 27 and 28) thinks that after a few months I will start to get the itch — we shall see. For now, I look forward to driving back home in a few days, sleeping in my own bed, sitting in my own easy chair, and getting on with the normal activities of life. But I hope that I’m a changed man in the ways I’ve mentioned and I want to thank all the readers of this blog for helping to make that so. 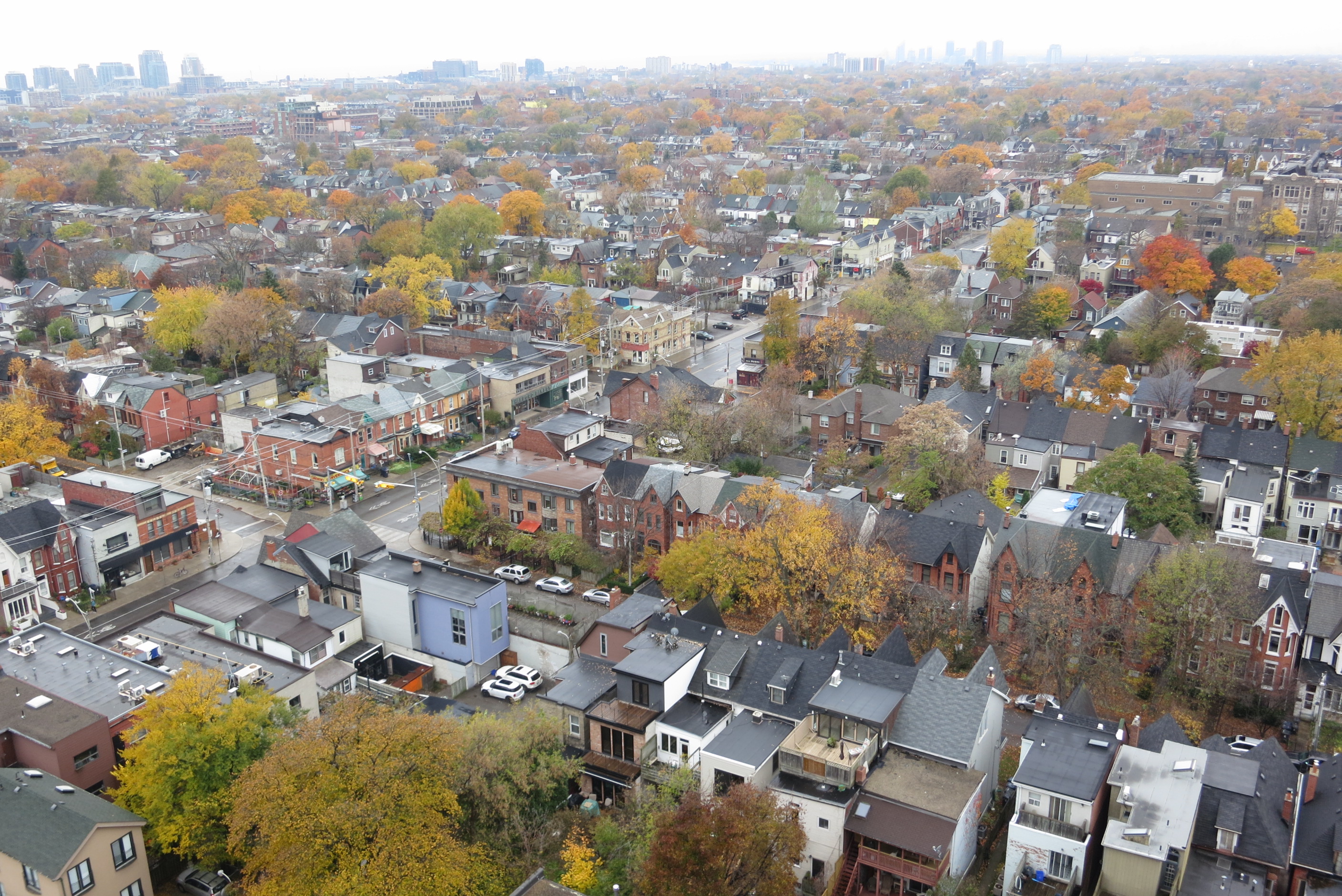 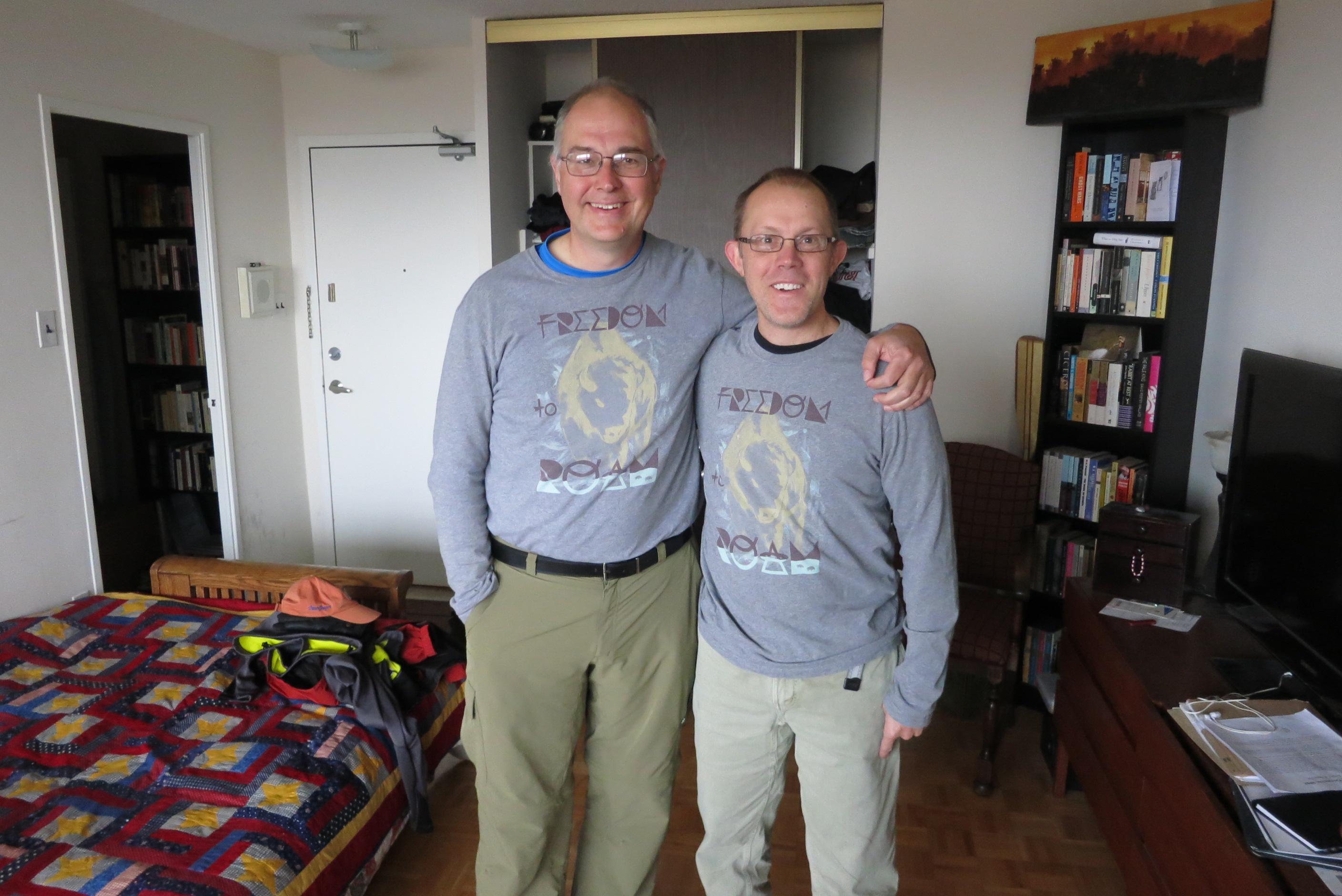 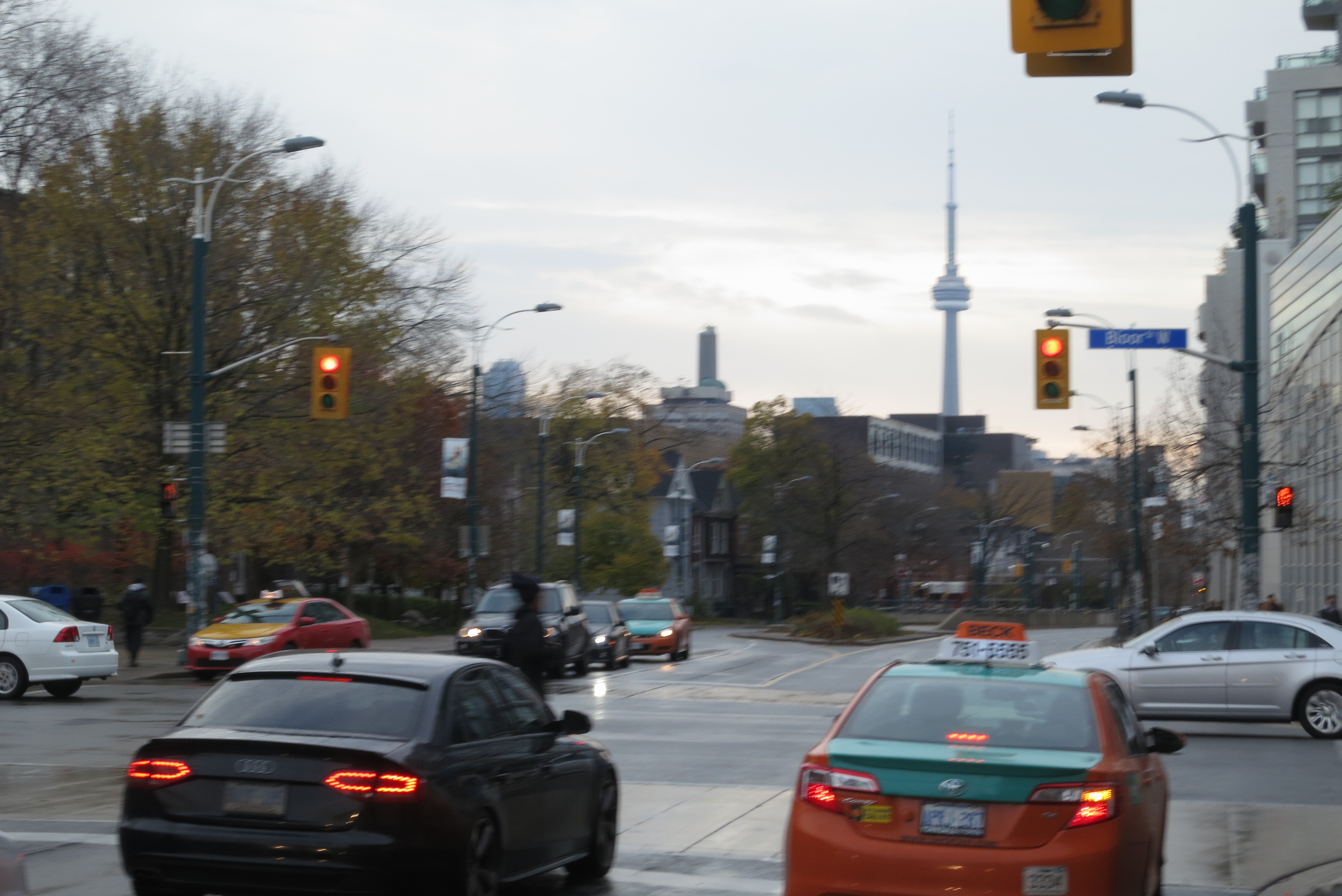 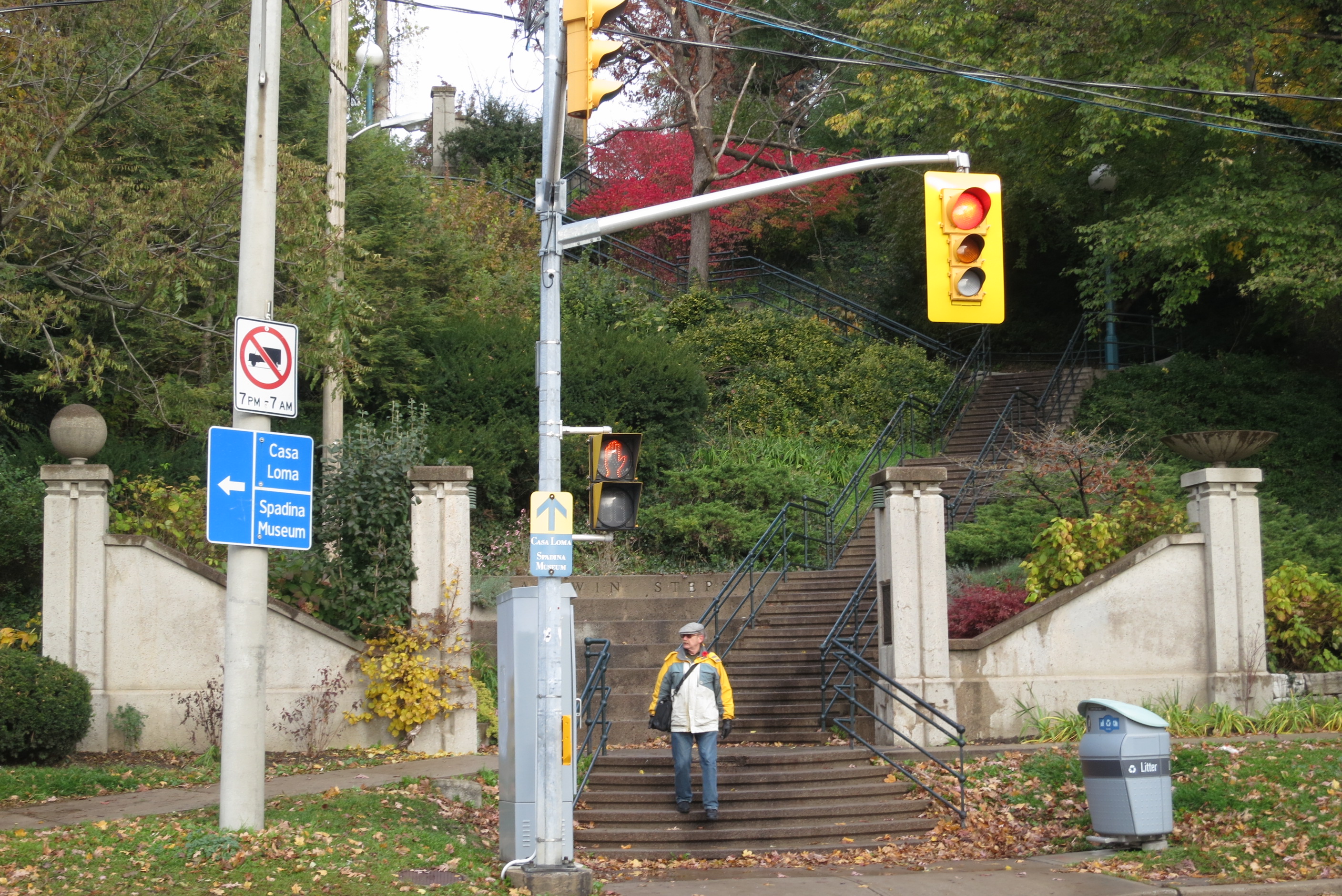 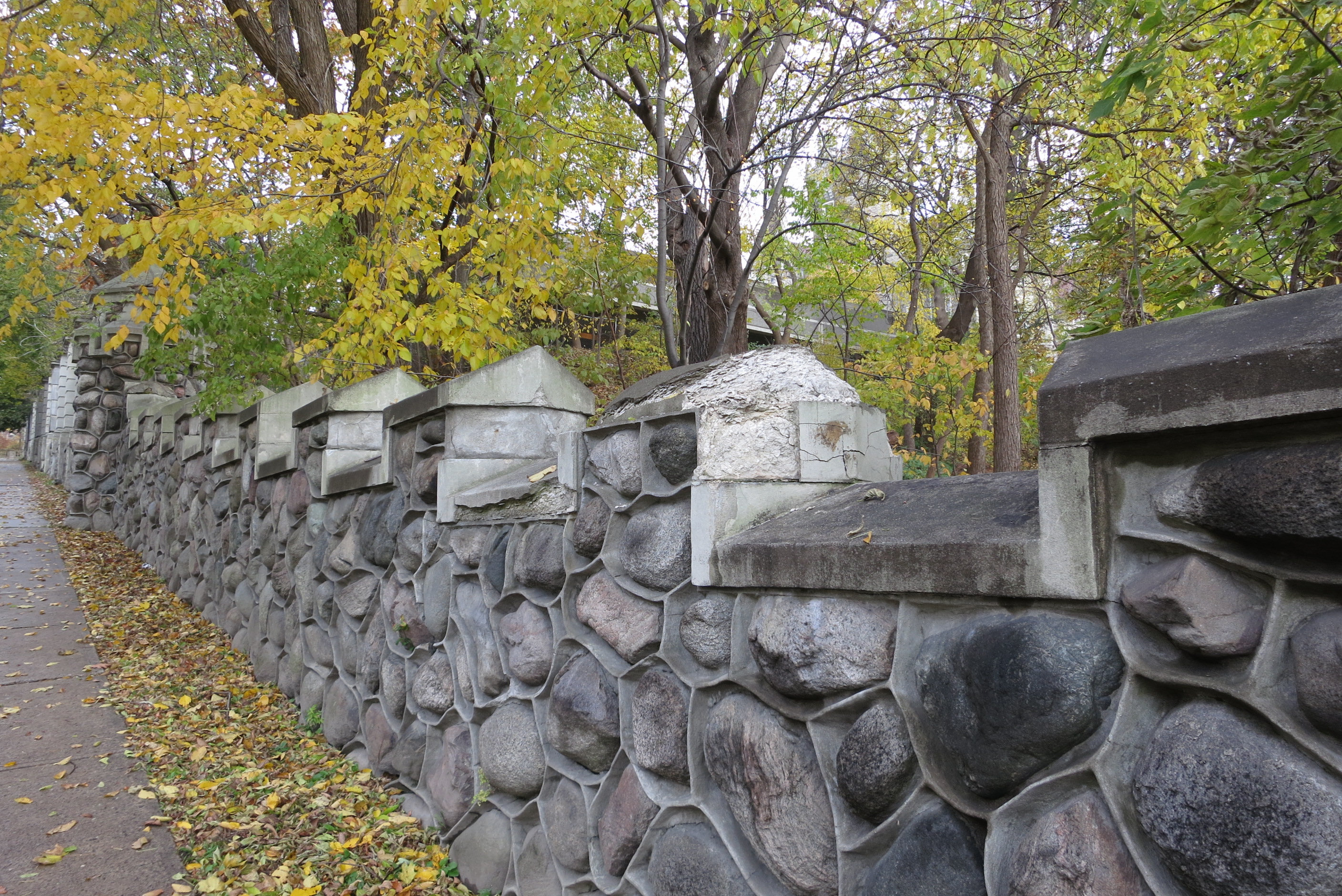 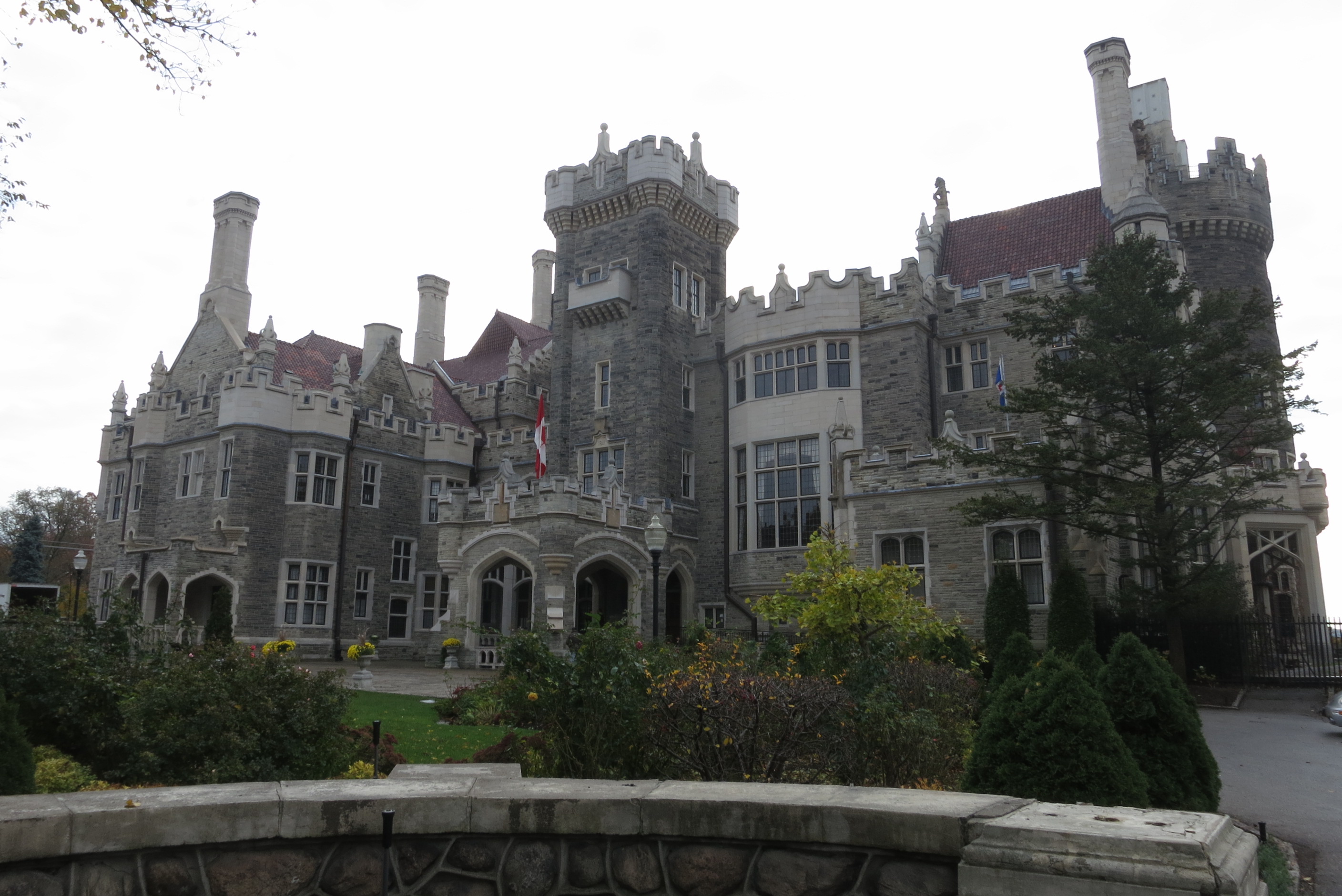 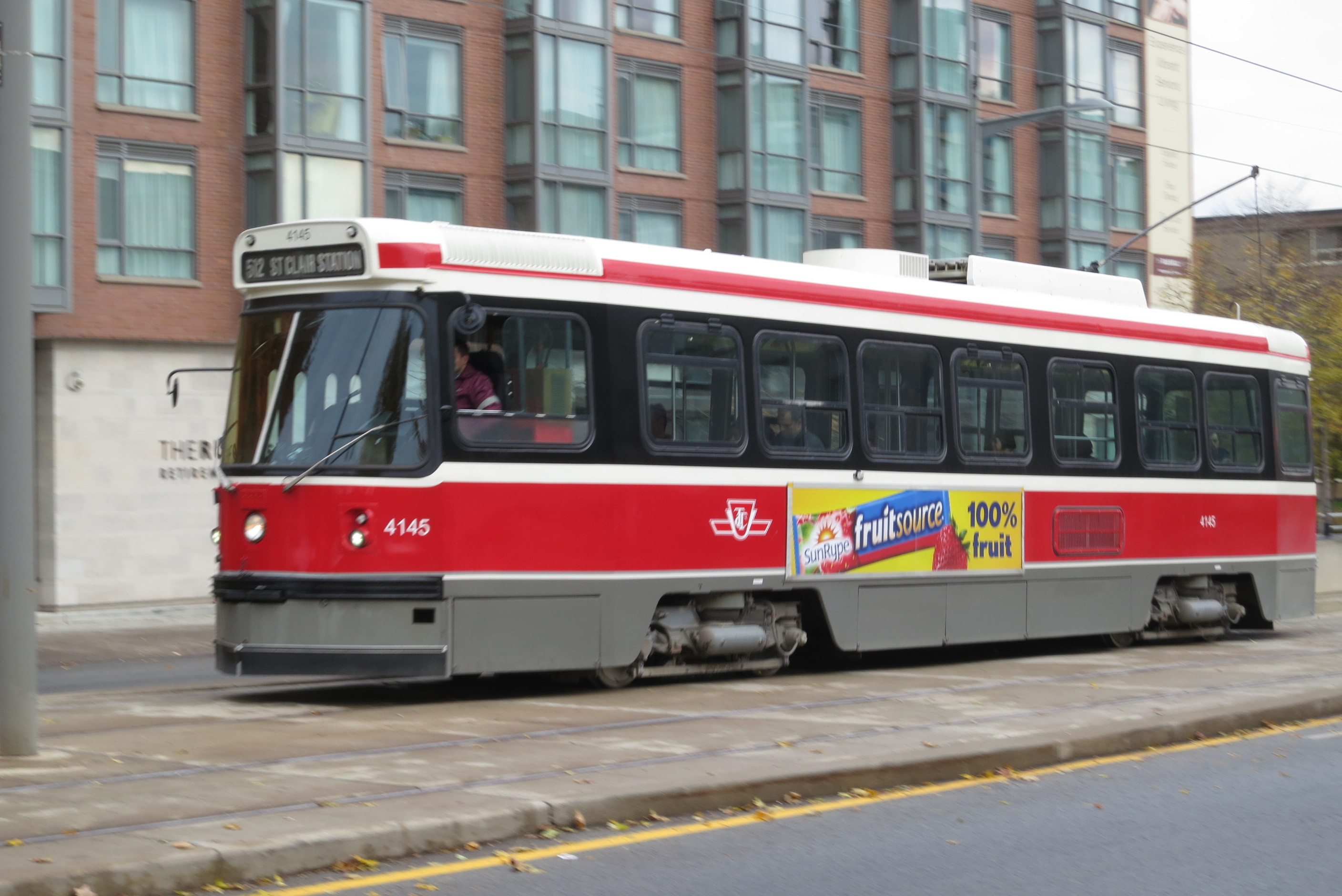 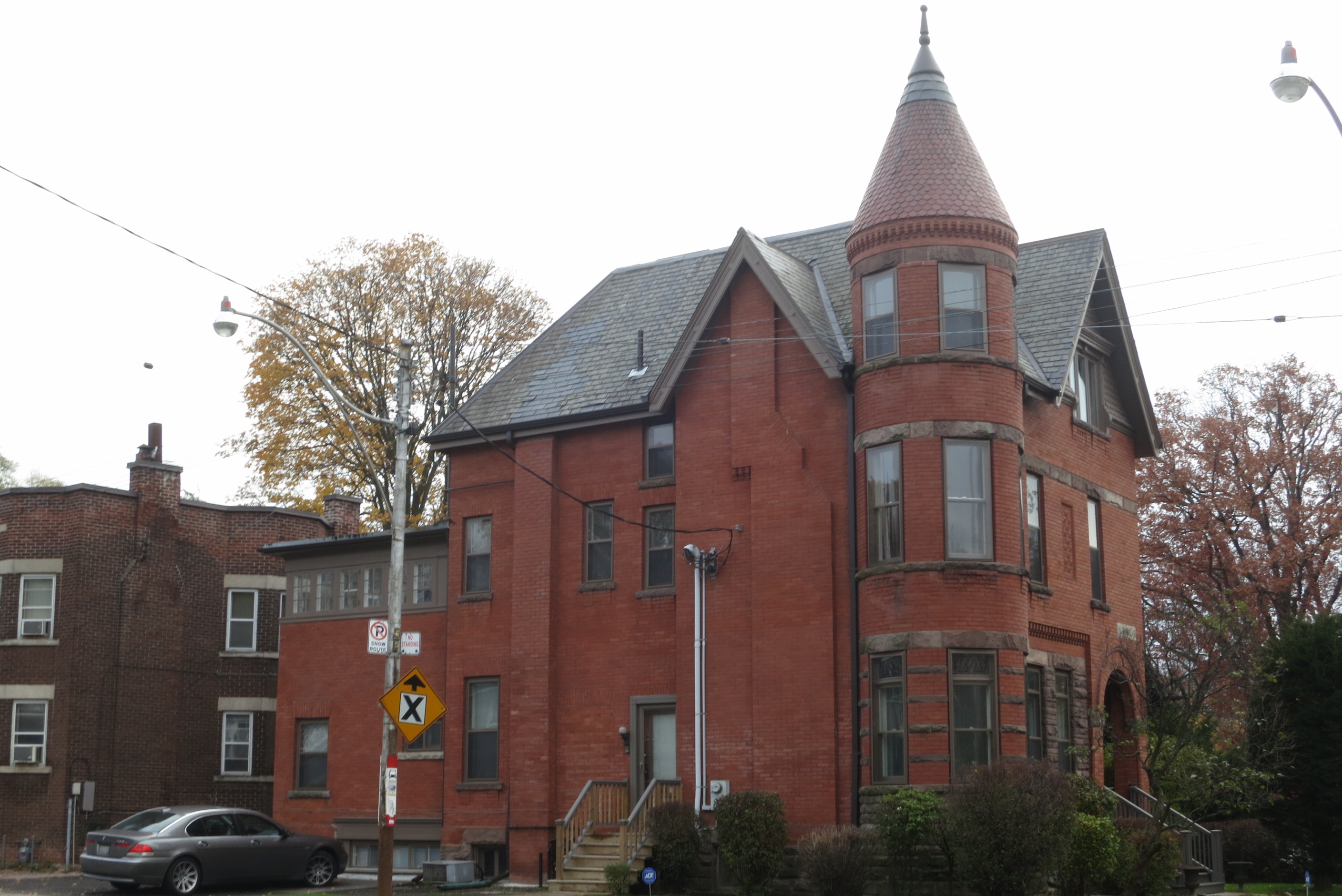 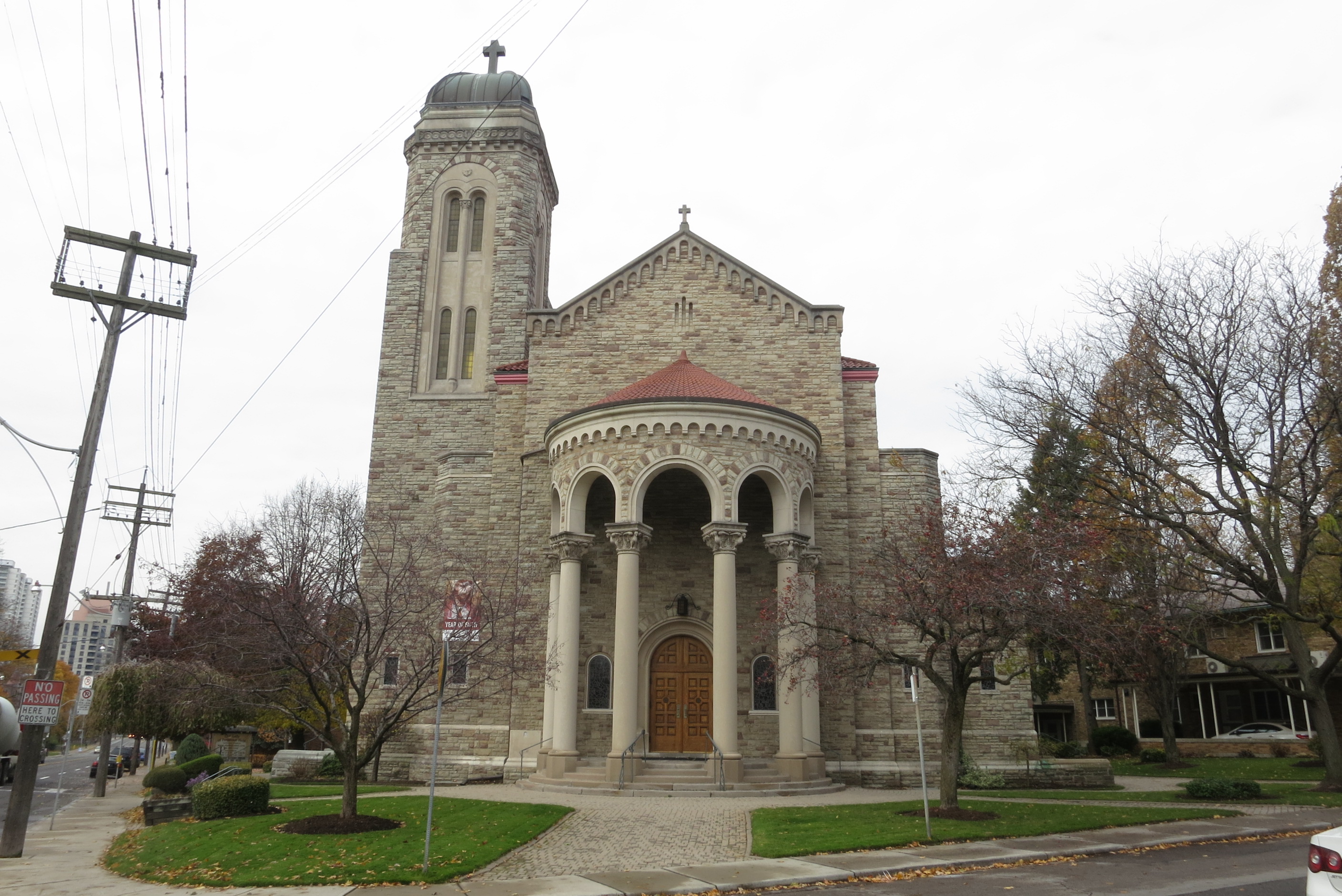 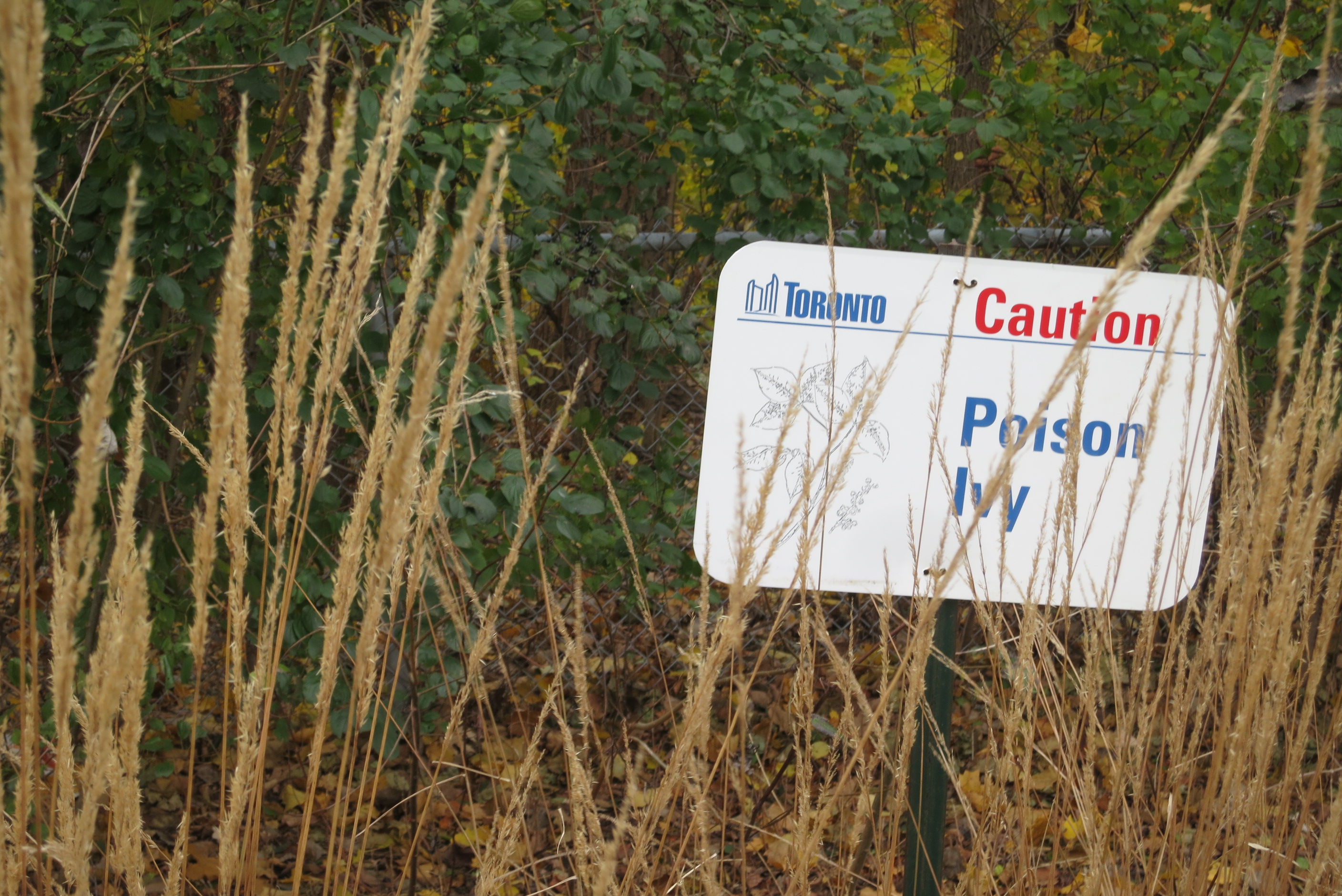 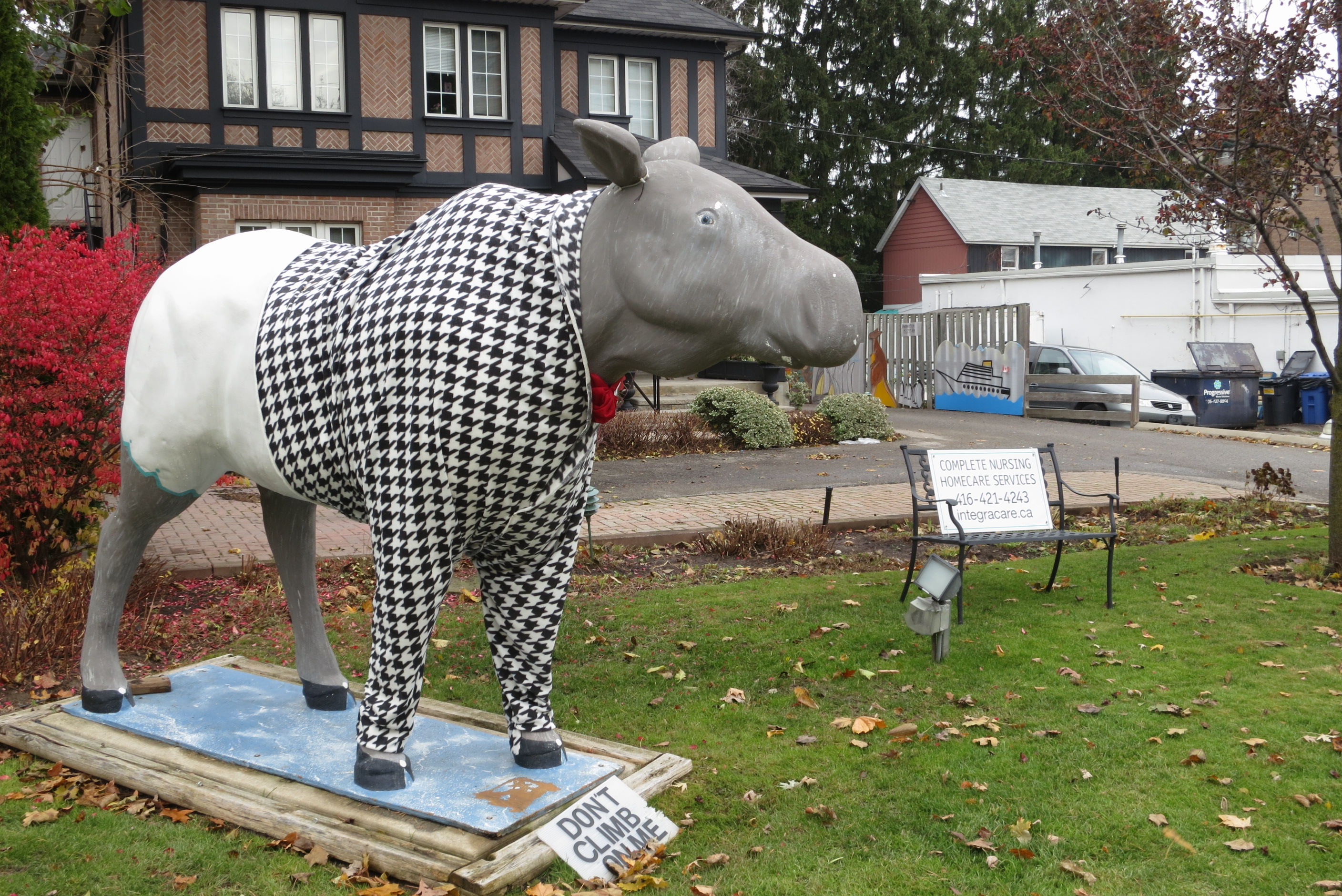 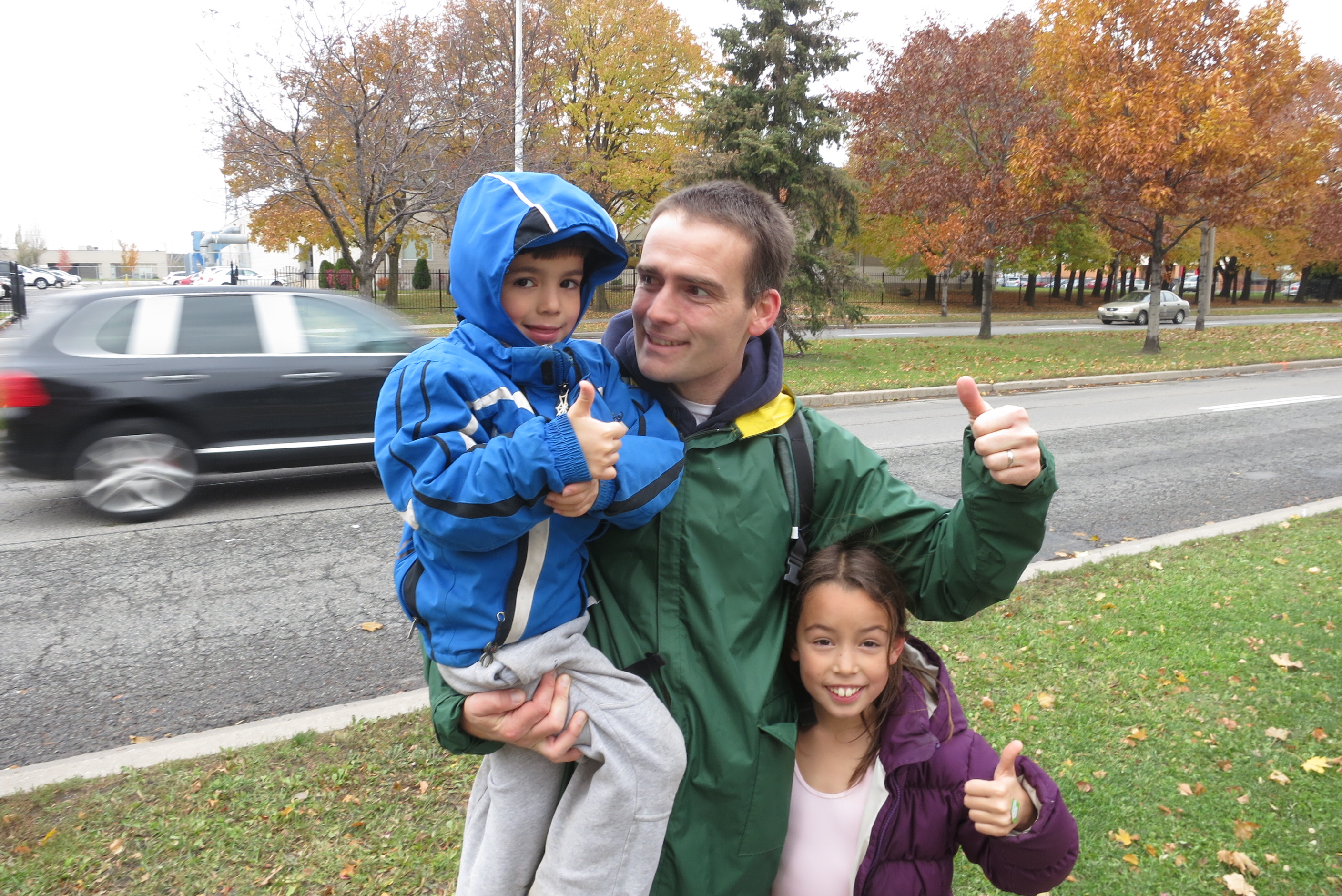 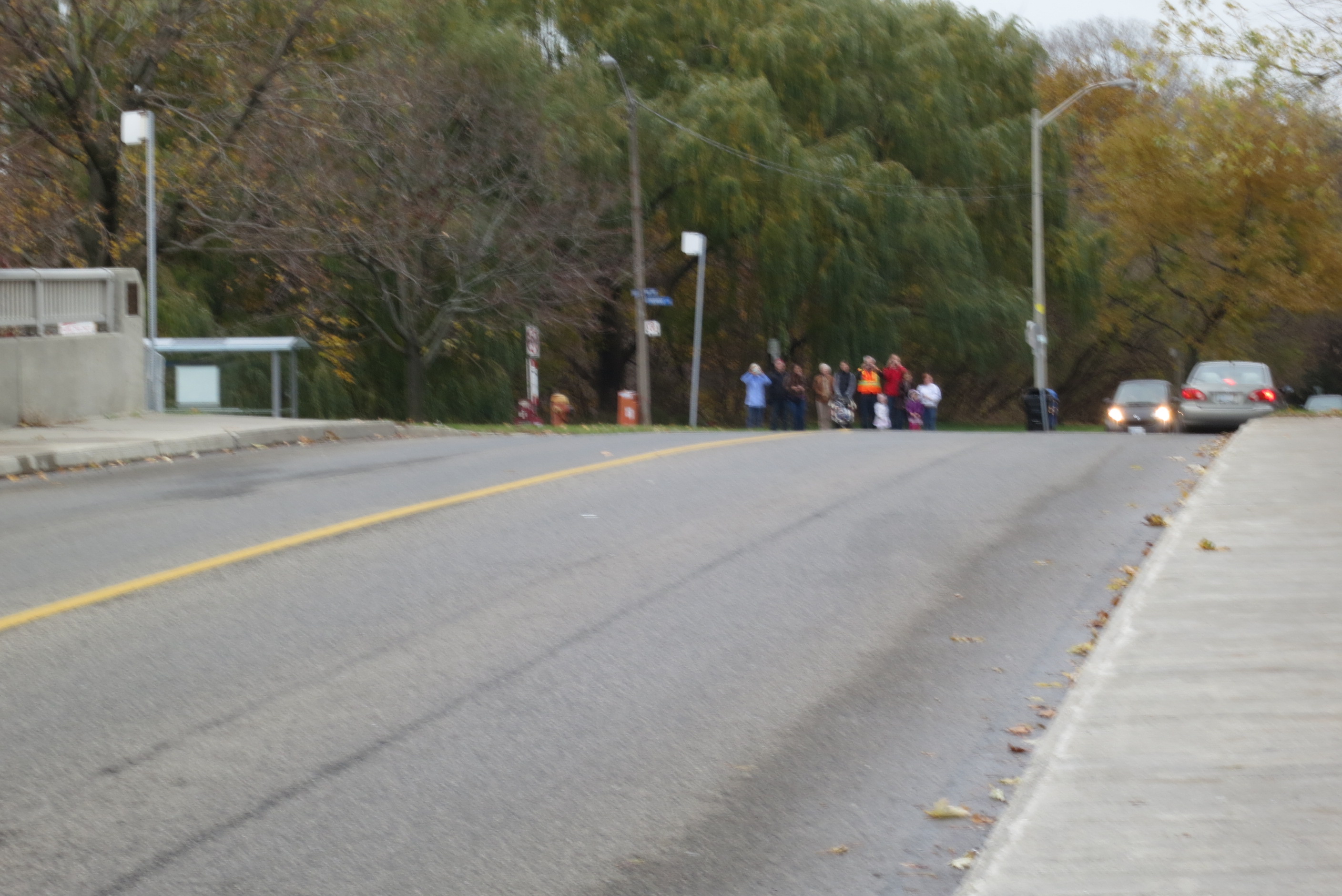 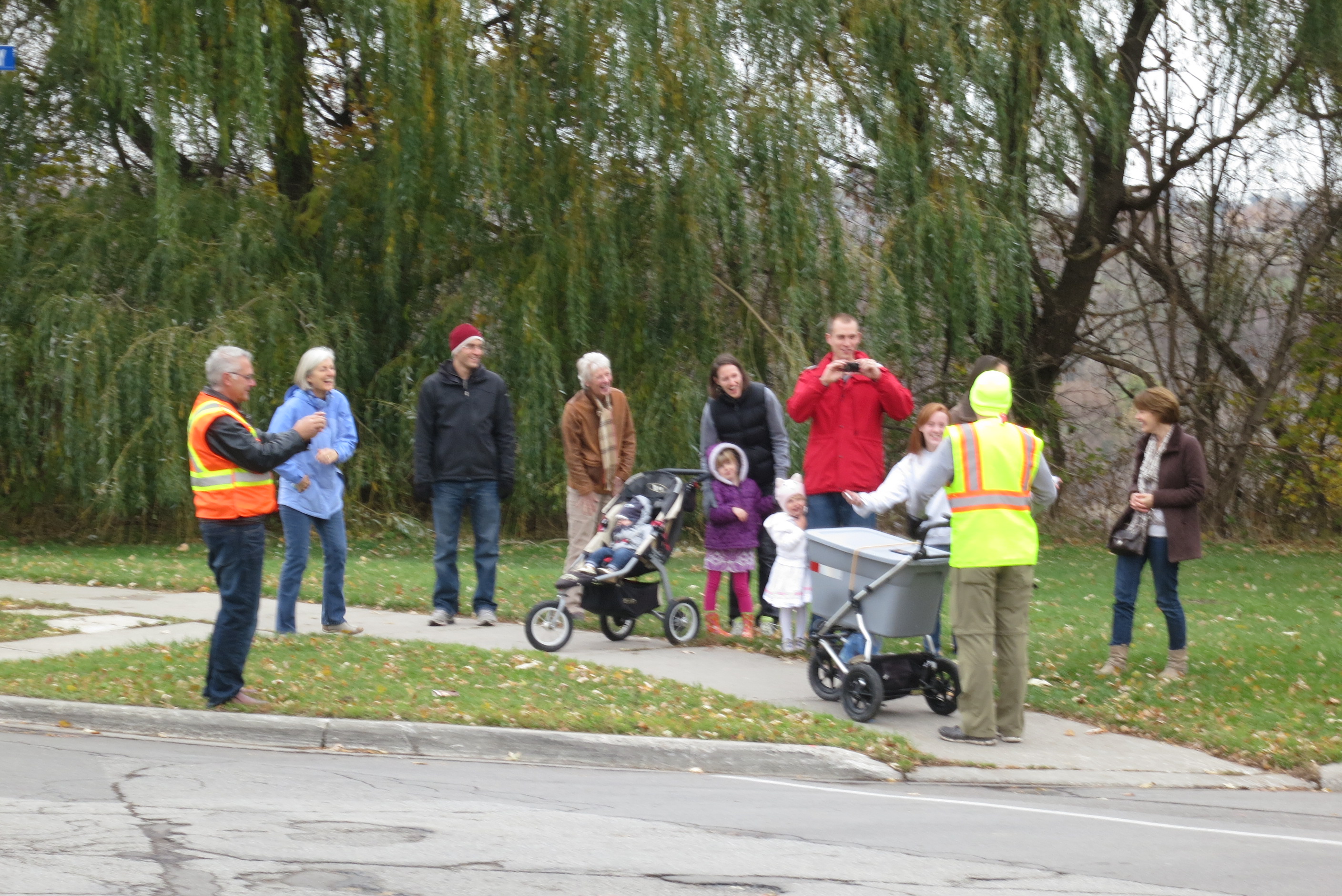 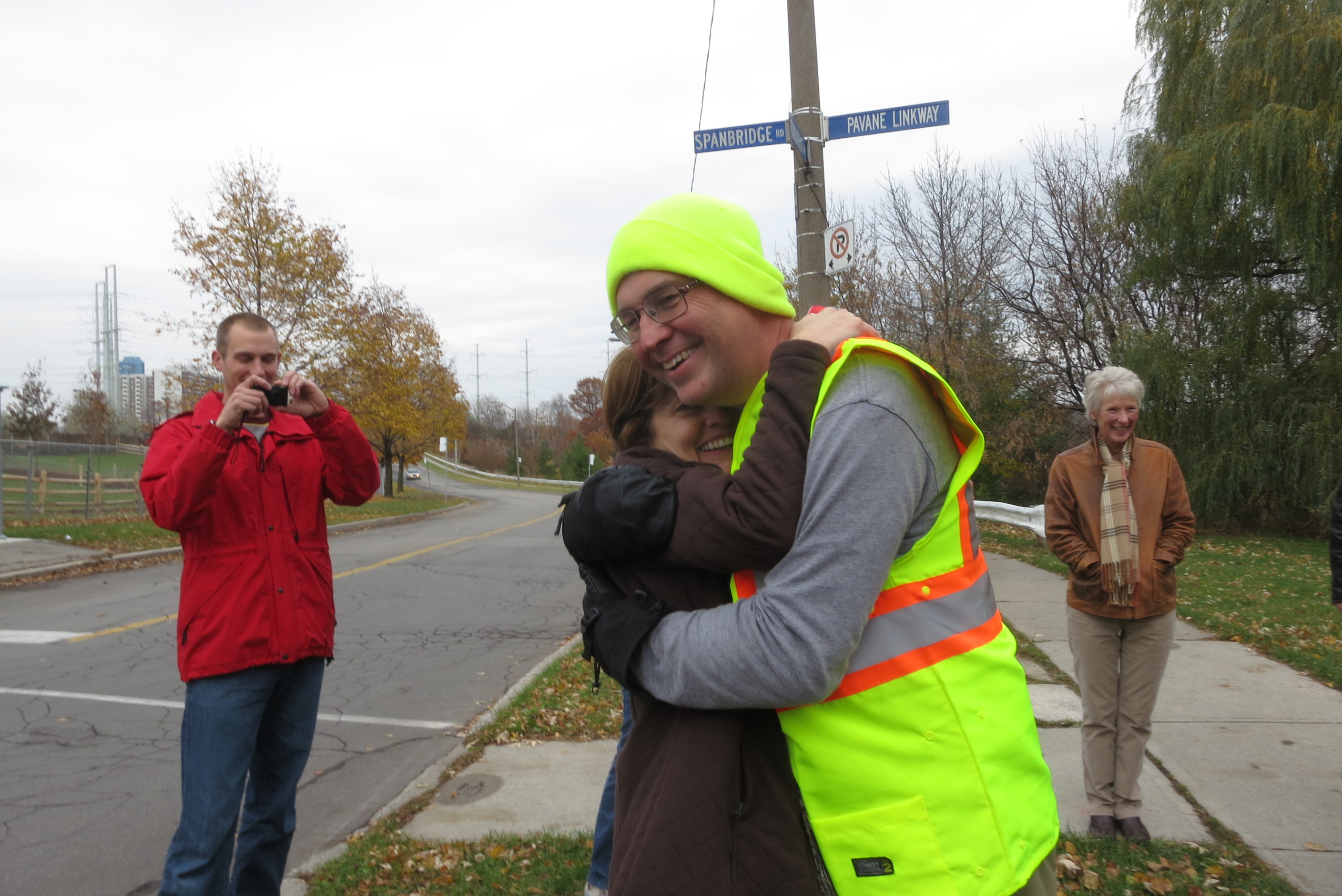 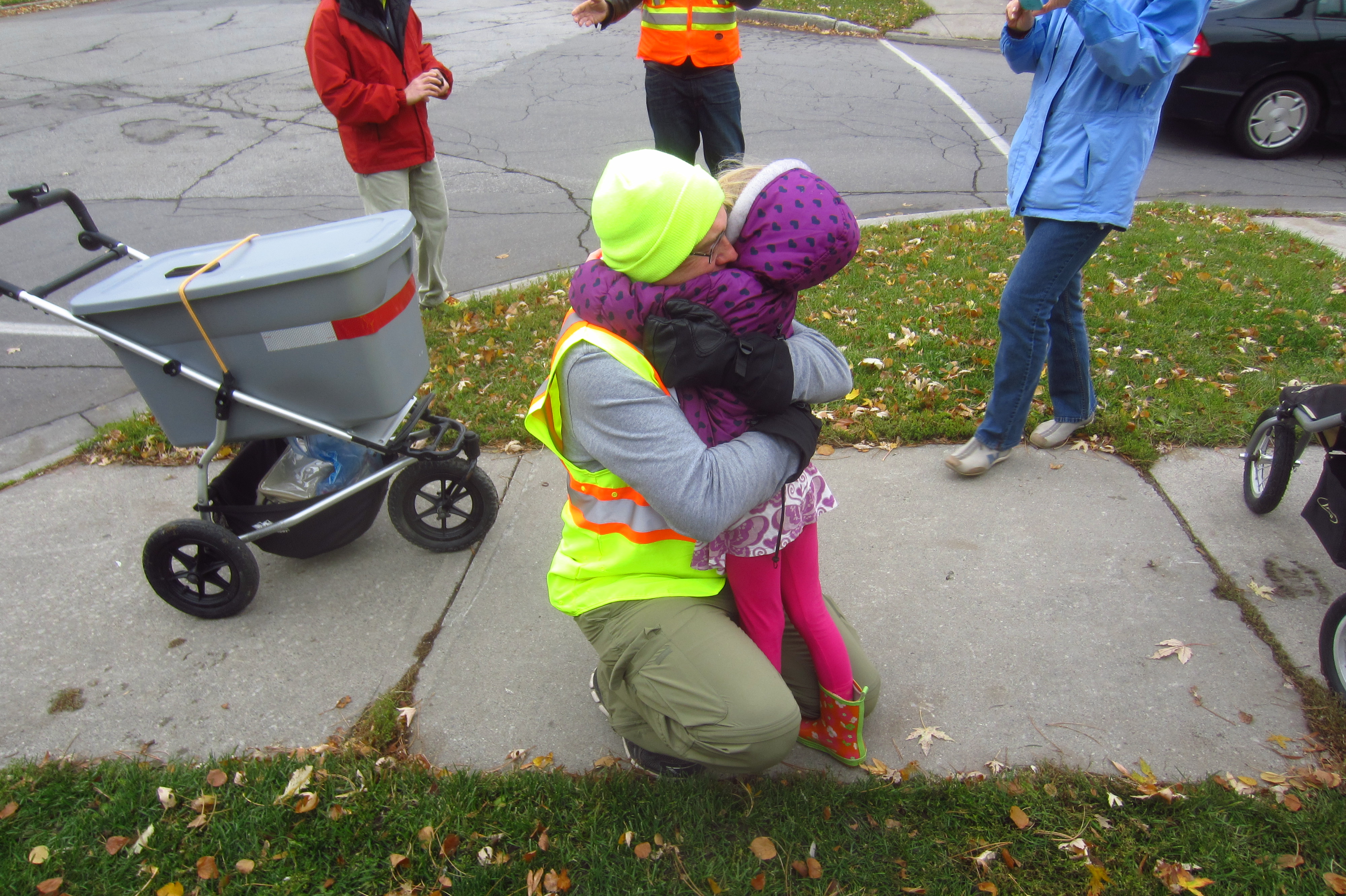 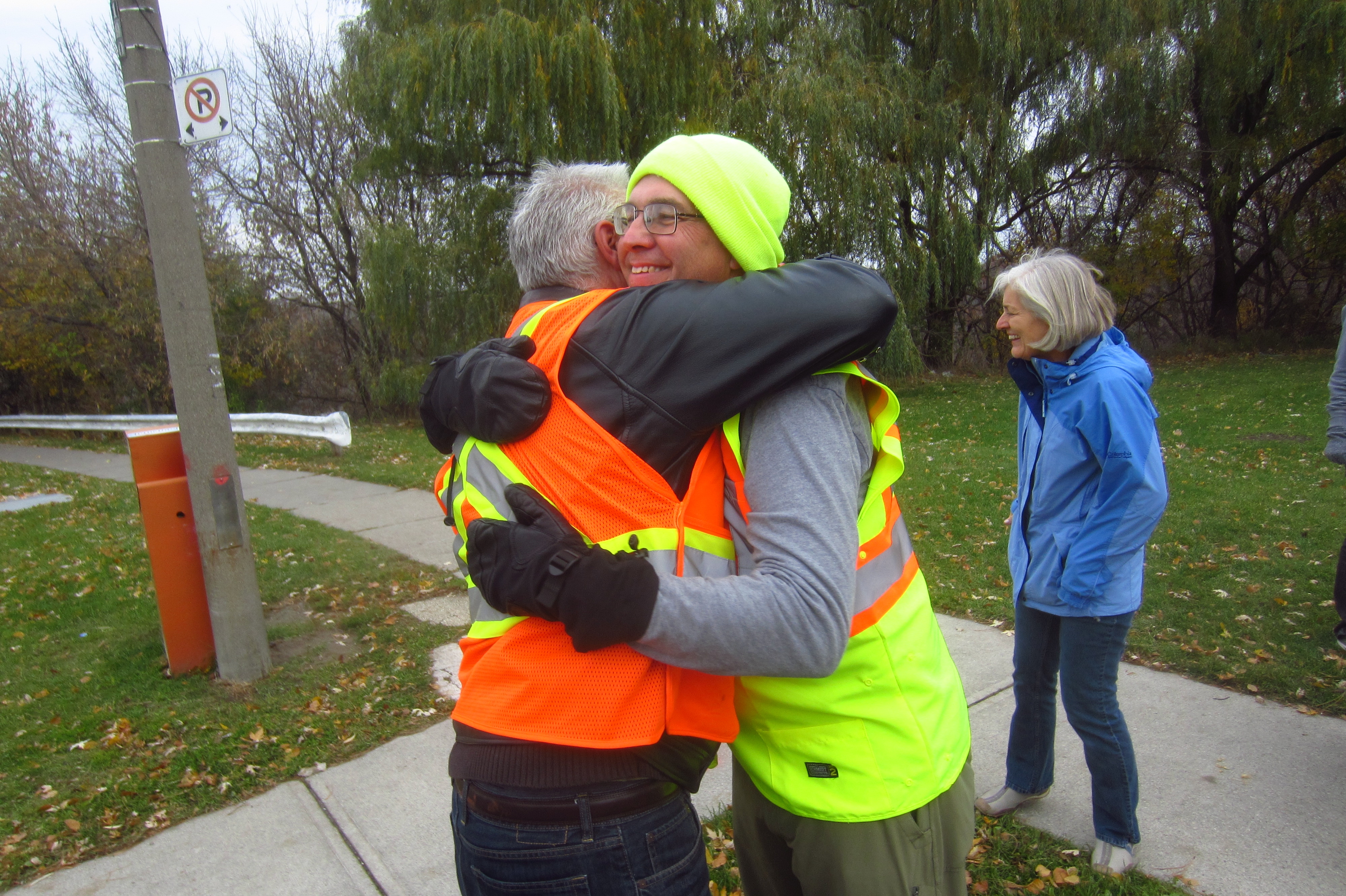 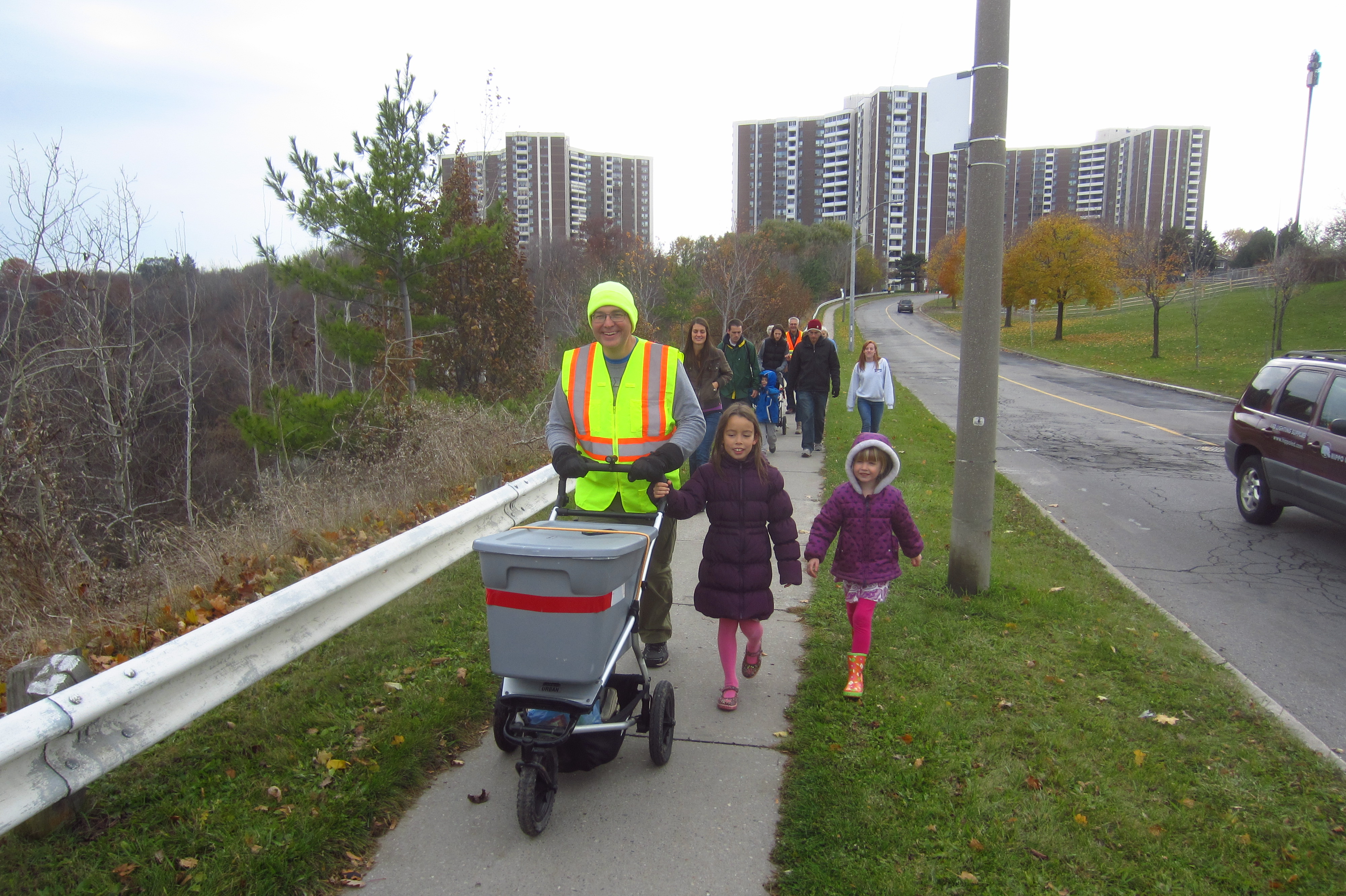 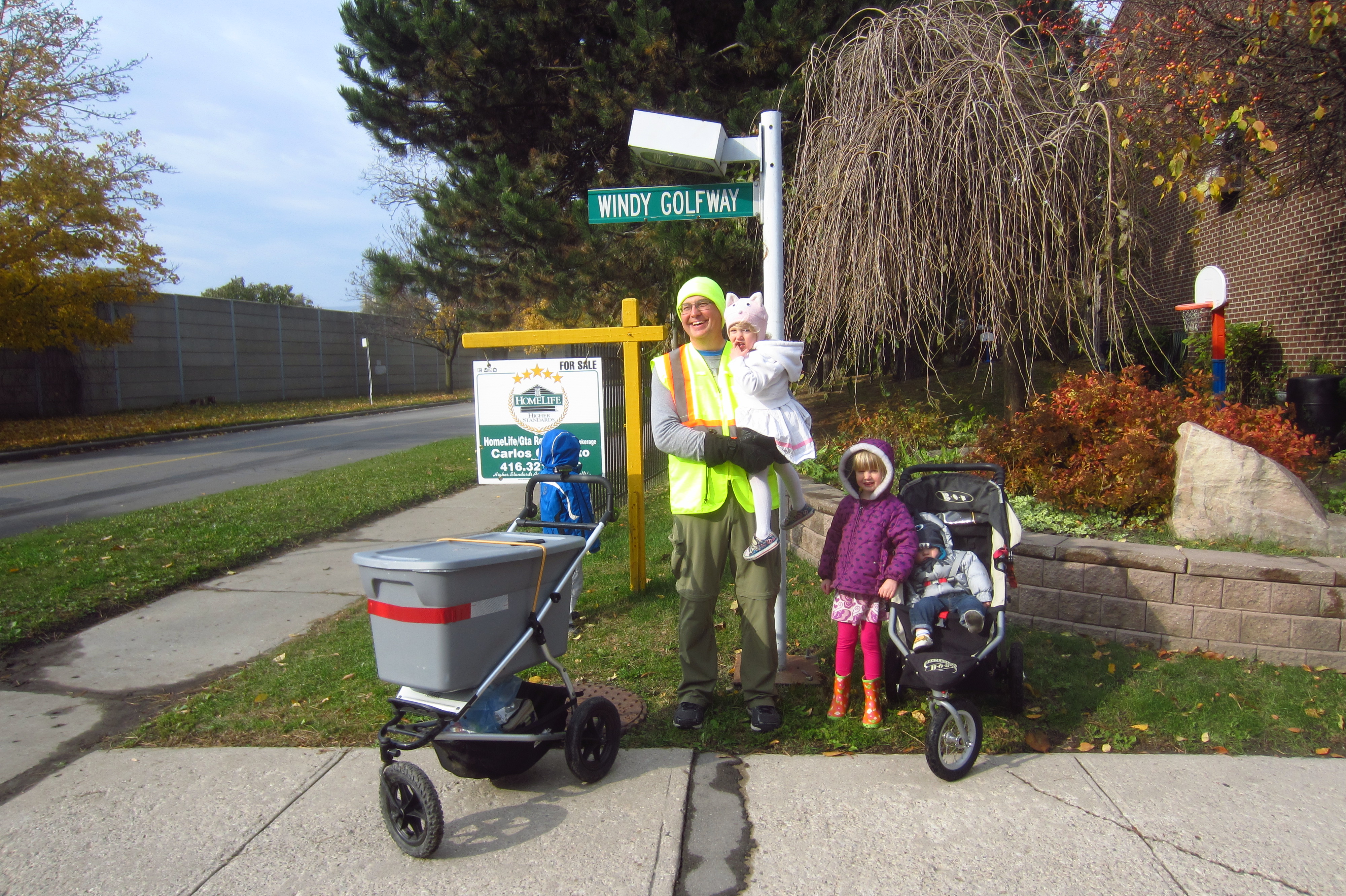 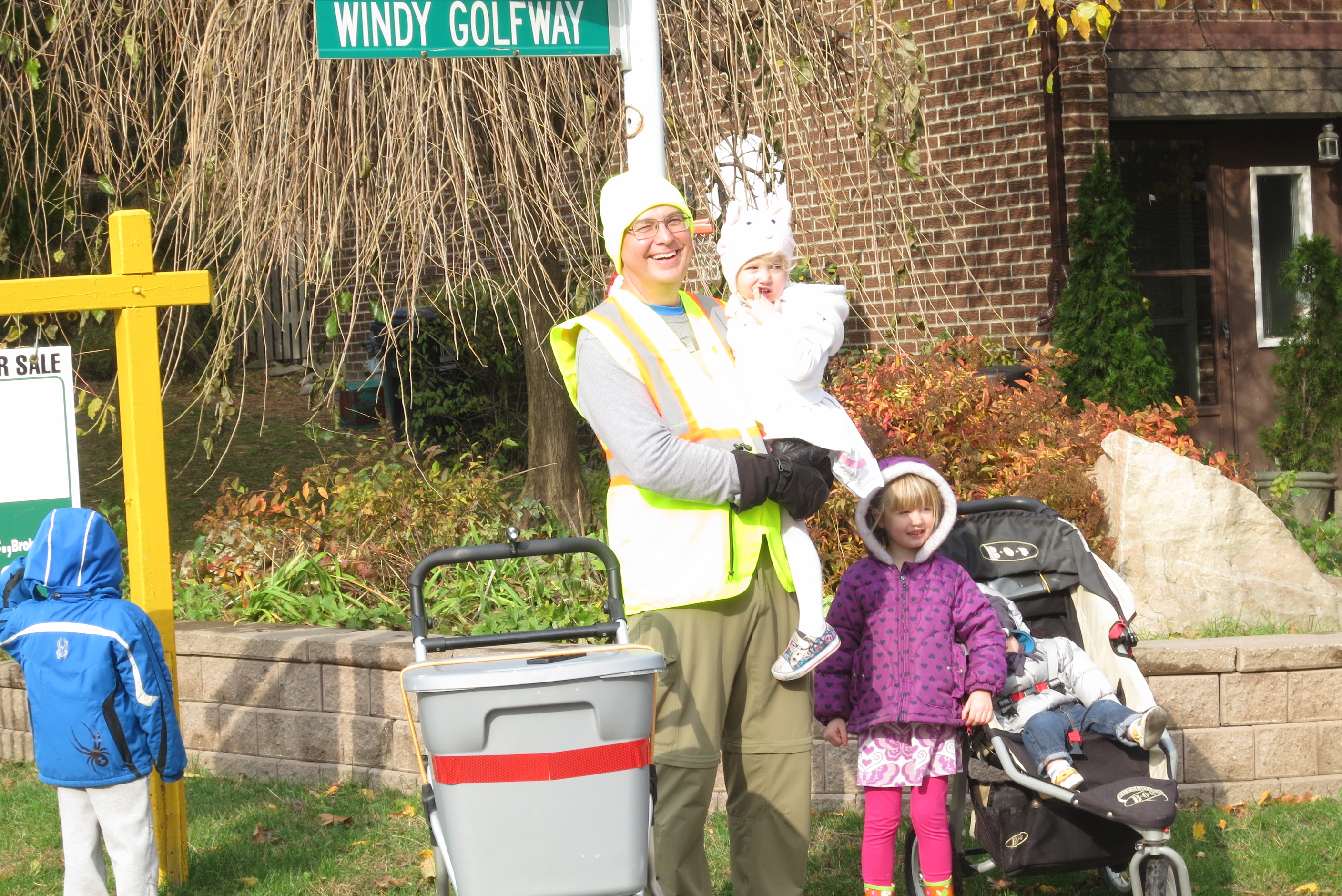